“Silambam is inseparable from me — I swing whenever I’m overwhelmed and also when I’m gloomy; it completes me,” says Kowshik Palanisamy who won the third World Silambam Championships held in China on February 20, 2018.

Kowshik moved to Chennai three years ago to pursue undergraduation in Bio-mining at the College of Engineering, Guindy (CEG). Citizen Matters caught up with him in the vast campus of CEG to find out more about his passion and the route to the top.

This was the first time that Kowshik contended in the world-level championship and came out on top, outperforming competitors from Israel, Thailand, China. However, he humbly avers, “I never imagined I would be the world champion, beating  all the other players out there.”

For taking part in the world-level tournament, a player has to first qualify through the district, state, national and South Asian levels.

“I did not take part in the first two world championships since I did not have anyone to guide or train me here in Chennai. The authorities in my college were unaware that I would be taking part in the championship, until I got through the South Asian Tournament and qualified for the finals,” said Kowshik.

“After continuous requests from the open game federation, I decided to take part and self-trained for the championship. I realized that the game is not about winning or losing, I just felt an urge to take part,” he adds.

In the finals, Kowshik defeated a Chinese player in the 60 – 70 kg category. When asked about how other players viewed Silambam, he said, “Others just see it as a sport. But for me, it is something that helps me transcend to a different state of mind. It belongs to my home state, yet it is revered only by people who practice it, predominantly in rural areas. If people have time to play cricket and football, they should also do their bit in reviving this indigenous art.”

A native of Vellankovil in Erode district, Kowshik initially trained in Silambam under his uncle, Rajendran who himself is a master of the martial art form.

“To be honest, when my uncle started the first batch, I was the last student to join. I had a sense of aversion towards the sport at that time, but here I am now — a champion, all because of him!” he admits.

Kowshik began training when he was in Grade 3, barely a 10-year-old kid. “When the other students had moved on to the next level, I was just getting a hold on the basics. I was learning at a slow pace,” he says. However, the rigorous training soon developed in him an affinity towards the art. In the years that followed, it opened an entirely new world for Kowshik, who rose to be the state champion in 2011, 2013 and 2015.

“My first match was in 2010, I was a Grade 6 student back then. I won the third prize in the district-level open tournament. It was after that first match that I took Silambam seriously and learnt the norms followed in tournaments,” reminisces he.

In 2012, the School Games Federation of India (SGFI) included Silambam among a long list of sports. “I had high school board exams and the state and national level exam in the same year. I qualified for the national level and won the first prize. I somehow managed to ace both my exams and in the pursuit of my passion,” he remembers with a beaming smile.

Now that he is the world champion, it is only natural that the winning moment would be the crowning glory in his entire journey with Silambam. But Kowshik holds something more precious than the title. “Beyond winning the tournament, it was the moment when all the world audience cheered me – an Indian, throughout the finals. I’m overwhelmed, from being a guy unrecognized by people around to one who has earned stardom through sheer hard work and blessings,” says the champion, struggling to find words to convey the intensity of his emotion.

Kowshik comes from a humble family – his father works as a tailor, his mother is a homemaker and his younger sister is pursuing undergraduate studies.

Talking about the support from his family, he says, “It was my parents, who pushed me into Silambam, for which I’m indebted to them. Even during my grade 10 and 12 board exams, my parents did not pull me away from the sport. They were happy to see me balance both my passion and education,” he said. 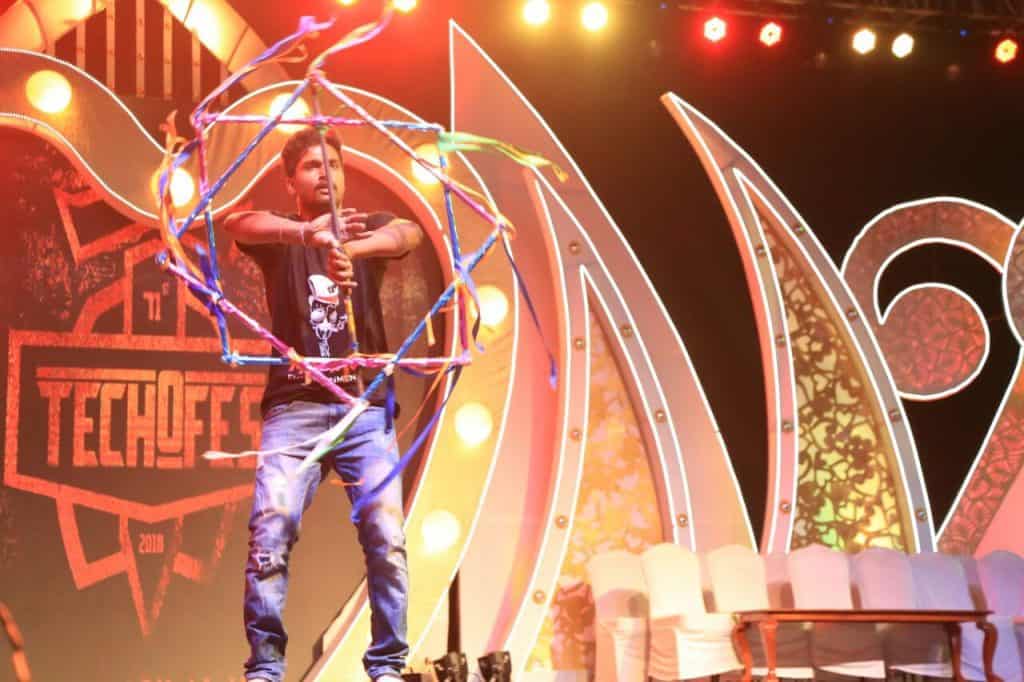 The champ enthralling the audience with ‘star’ form of the traditional art – Silambam. PC: Ajay Domnic

Well into a decade of his tryst with Silambam, with several laurels in his cap, Kowshik still had to pay from his pocket to be able to participate in the world championship. As the championship was held in China, he used the cash prizes that he received at the district, state and national level competitions to pay for travel.

“I’m not from a well-off family, every time I take part in championships, I need to spend money for travelling. The accommodation alone is taken care of by the organisers. What bothers me is the fact is that I can’t even ask for sponsorship in my college to travel, as it is officially not recognized as a game.”

Because of his mastery over the martial art and dedication towards Silambam, Kowshik has now got an opportunity to teach the sport to 80 other students at CEG. Even in his packed schedule, he squeezes in time for these classes as it will help to spread the art form. The sports board of CEG approached the champion after he won the South Asian tournament and requested him to train others.

“I attend classes in college till 4.30 pm, teach the students between 5.30 pm and 8 pm after that, and then practice for upcoming tournaments after getting back to my room. Teaching the students also helps me rectify any wrong move that I may have made,” he says.

Silambam for the future

A majority among us grew up watching late 20th century films, where Silambam stunts played a crucial role, especially in the village-centric movies. Having said that, as times have changed, so have the games. Today, such indigenous traditional arts are pursued only in rural areas, if at all. Cities, sadly, seem to have forgotten all about it.

“Many of my students who learn Silambam today joined without knowing anything about it. Among the 80, only two people approached me and said they had learnt the basic techniques but had not been able to continue owing to academic pressure,” says Kowshik, “I’ve been living in Chennai for three years now, yet none of the college authorities recognized the talent until I won the South Asian tournament.”

Talking about the need for promoting such arts, he explained, “There should be more teachers to pass on the art to the next generation. But an extra-curricular trainer alone cannot revive the art. Traditional art training must be made a part of  school curriculum in early years, just as the basics of all theoretical subjects are.”

Kowshik wants to do his bit, however, in reviving the art. “Now that the sports board in my college has given me an opportunity to teach, I’ll make consistent efforts to ensure that the sport is recognized in the college tournaments regularly from next year,” he concludes.

Interview: When and how will Chennai get the COVID vaccine?

In an exclusive interview with Health Secretary J Radhakrishnan and Corporation Commissioner G Prakash, we discuss the most important aspects pertaining to COVID-19 vaccination.

Can a motley group of school students aged 8 to 13 suggest and devise solutions to problems such as air pollution, waste management and water scarcity? Yes, they can and the Sarvalokaa Hackathon in the city gave them a platform to showcase their innovative solutions.

How will the ongoing pedestrianisation project in T Nagar under the Chennai Smart City mission impact the area and the lives of residents and visitors? Will it address the current concerns shared by citizens and traders? Can it hold lessons for other neighbourhoods?