Come June 19th and the Chennai Trekking Club (CTC) will be organising the 7th edition of the Chennai Coastal Cleanup (CCC7).

This is one of the club’s key events where almost every CTC-ian gathers to take a pledge to move towards a garbage-free Chennai.

CTC passes a strong message on environmental awareness through the initiative. It has organized six editions of Coastal Clean Ups since its inception and partnered with the Chennai Corporation in its last edition.

This event is now over.

The ambitious target for the coming day is to collect garbage from 25 km of Chennai beaches with 10000 plus volunteers – individuals, corporates, schools and NGOs who will join hands together to create a strong message of environmental awareness within the community.

Coordination of this massive clean up operation will be done by a volunteer team of the Chennai Trekking Club comprised of 300 plus members. They will coordinate with both groups and individual volunteers at over 15 target beach zones and lakes in Chennai & other cities. 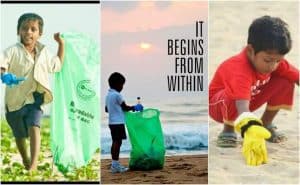 CTC is a non-profit group, run by volunteers who share a common passion and love for nature and the outdoors. They organize a number of outdoor events across South India almost every weekend of the year. These include trekking, cycling, swimming, running, marathons, triathlons, clean-ups, plantation activities, and so on.

CTC strives hard to preserve and create a better environment for today as well as for tomorrow. CTC’s close touch with nature has led its enthusiastic participants to take various initiatives in preserving the environment.

The major social activities of CTC include Clean-up of the Chennai coast and river banks, plantation activities, rehabilitation works, waste management and terrace gardening.  CTC has taken efforts to take more than 2000 underprivileged children on 49 treks. It also organizes workshops on first-aid, photography, mapping and navigation and many more.

CTC is proud to have a bunch of very dedicated and humane volunteers who have worked on rescue efforts at various levels for a number of people who were affected by the Chennai Floods in the year 2015.

Chennai Red Knights is CTC’s blood donation initiative that was initiated with the sole purpose of providing blood during emergencies and also to cater to the need of blood banks.

CESAW is CTC’s Environment and Social Awareness Wing that works on a number of initiatives such as knowledge sharing & workshops on environmental protection, awareness creation and other pro-social activities.

Since 2014, a number of regional NGOs have joined CTC in cleaning various lakes and rivers. Thus was born India Clean Sweep, which is the name that the group gave to their cleaning efforts outside Chennai.

So! see you on Sunday!

For activists and officials clearing encroachments in Chitlapakkam Lake, it was heartening to find a good number of people rising above blind religious belief to support the environmental cause.

Only 14 per cent of the parliamentarians in Lok Sabha are women. Despite lip service by all political parties, the Women’s Reservation Bill remains the longest pending bill in Parliament. Perhaps it is time for citizens to take up the fight?

They save trees from abuse in their free time, and you can too!

Through the month of April, volunteers of NGO Nizhal have been freeing trees of advertisement boards and other forms of constriction, thus gifting them a fresh lease of life.