Even as the AIADMK government assumed office with a historic second consecutive victory in the Assembly Elections, DMK swept Chennai, by winning 10 out of 16 seats. Another factor was anti-incumbency – except for Dr. Radhakrishnan Nagar, Kolathur, Royapuram, and Chepauk-Thiruvallikeni, none of the other constituencies in Chennai district saw the reelection of sitting MLAs.

Yes, it was, for at least some poll analysts. Many constituencies in Chennai were not so happy with their MLAs’ performance during the last tenure. This was projected in a survey done in February by Association for Democratic Reforms (ADR), an NGO which works in the area of electoral and political reforms, the results of which were declared on May 4th 2016.

The ADR survey explains this discontent among voters. It reveals that it is not just the December floods that has contributed to the anti-incumbency wave against the sitting MLAs, but the poor performance in addressing civic issues have irked the voters. The survey provides insights into the major concerns of voters in different constituencies and issues that the newly elected representatives should prioritise.

According to the ADR, around 83 percent of voters listed one of these as their top priority. Employment opportunities, food price, and facility for cyclists and pedestrians were other major issues while reservation for jobs, education, terrorism, strong military ,and corruption did not figure in the list of the top 10 priorities.

Public transport (9.41%), school education (8.35%), electricity for domestic use (8.23%), hospital/Primary Health Care Centres (8.04%), encroachment of public land, lakes etc (7.98%), Public Distribution System/ration (6.99%), drinking water (6.19%), better roads (6%), garbage disposal (4.15%), corruption ( 3.90%),  agriculture subsidy for seeds and fertilisers (3.71%),  availability of water for agriculture (3.59% ), and terrorism were other issues that were important for the respondents. Voters from many constituencies including Kolathur, Saidapet, Virungambakkam and Villivakkam, told Citizen Matters that lack of access to the Public Distribution System (PDS) was a major concern for them, and suggested better monitoring mechanisms to  ensure corruption and unfair practices in ration shops.

The overall average performance of the government in issues of voters’ priorities in Chennai  was ‘bad’, and none of the issues received a ‘good’ rating. In Dr. Radhakrishna Nagar, which is the Chief Minister’s constituency, the survey rated the performance as ‘average’ in the case of employment opportunities and agriculture subsidies (seeds, fertilizers), while other areas including pollution and traffic congestion were ‘bad’. Drinking water supply, healthcare, pollution, and sanitation, were the main concerns of residents here.

This has been reflected in the election too. The victory margin of Jayalalithaa has come down from 1.5 lakh votes in the by-elections held last year to around 40,000 .

Empowerment of women and security and  ‘sand and stone quarrying/mining’, was rated in the ADR survey as ‘average’ in Kolathur constituency represented by the DMK leader M K Stalin. However, the constituency has performed poorly in areas of employment opportunities, agricultural loans and subsidies, and health care. Despite this, this year his victory margin rose from  from 2,734 votes in 2011 to 37,730.

Royapuram has re-elected AIADMK’s D Jayakumar who has represented the constituency since 2001. However, his victory margin has come down from 21,372 votes in 2011 to 8,031. Chepauk-Thiruvallikeni which as always remained DMK’s stronghold reelected J. Anbazhagan (DMK) who victory margins has risen from 9,203 in 2011 to 14,164. 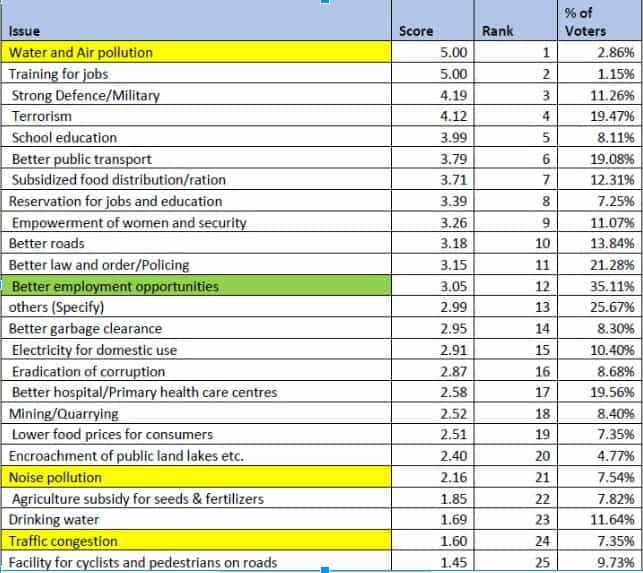 Agriculture loans (24.75%), employment opportunities (22.88%) and electricity for agriculture (20.72%) are the top priorities for voters from rural areas who form a major portion of the total voters in Tamil Nadu. These three issues were ranked 27th, 26th and 30th respectively indicating that the government performed poorly  in areas prioritised by rural votes. At the same time, employment opportunities, noise pollution, and drinking water supply were the main concerns of over 20 percent voters in urban areas in Tamil Nadu.

Health care, roads, and traffic congestion were the other top priorities of 17-18 percent for the respondents. All the respondents from urban areas  including constituencies in Chennai listed one of these six issues as important.The voters also listed water and air pollution, public transport, law and order, and electricity for domestic use as other major issues.

According to ADR, noise pollution which was the top priority of urban voters was ranked last in terms of performance of the government. Out of the 31 issues listed, employment ranked 19th  and drinking water was in the 23rd position based on the voters’ ratings. Traffic congestion which was a main concern for over 17 percent of voters ranked 30th, healthcare 18th and roads 24th positions. This reveals that, similar to the rural areas, the government performed poorly in addressing issues that were prioritised by the voters in urban areas too.

While the AIADMK government has promised in their manifesto to address issues including drinking water supply, employment opportunities, and transportation facilities, it needs to be seen whether the issues raised by the residents of Chennai  would be addressed during its second consecutive tenure.

Despite induction into GCC limits, Alandur residents complain of glaring civic gaps. What are the main issues? And who are the MLA candidates this time?

“Don’t forget! May 16!” scream the posters. They are quite hard to miss, plastered as they are onto every vertical surface in the vicinity of any government building, local corporation school, bus shelters, trees or

Urban voters have often been berated for the low polling percentages recorded across cities. But is the percentage really that low? And are there procedural issues that could be the reason? Mahesh S T analyses the Chennai rolls.