I remember the day well. Several of us had received a Whatsapp message asking us to participate in a silent protest on Besant Nagar beach on February 26, 2017.  The message said the protest idea had been mooted by a group of women. I remember thinking to myself – Who are these women? Are they really going to do something? Maybe the message is a hoax… And I did not go.

I wish I had gone to Besant Nagar beach that day. I would have witnessed the birth of an all-women initiative that calls itself VoiceOfPeople. No leader, no followers, no office bearers. It is made up of people like me – daughters, wives, mothers, sisters… ordinary citizens, who want their voices to be heard, and anger against the present state of affairs in Tamil Nadu, to be registered.

The women have come together to demand, what should ordinarily be every Indian citizen’s right:

That day on Besant Nagar beach, Voice of People collected 1000 signatures from fellow citizens. They planned their next meeting on March 5, 2017, but when they assembled, a huge posse of policemen asserted that they could not sit on the beach. So the women walked up and down the promenade, singing songs from Bharatiyar and Tamizh Thai Vazhtu, reminding themselves and others, of the former glory of Tamil Nadu.

A week later, they made sure they had prior permission, and performed skits and songs on the beach, again highlighting the extent of corruption in public life and the need for every voter to step up and become active in governance of the country. Over 500 people assembled and watched them. 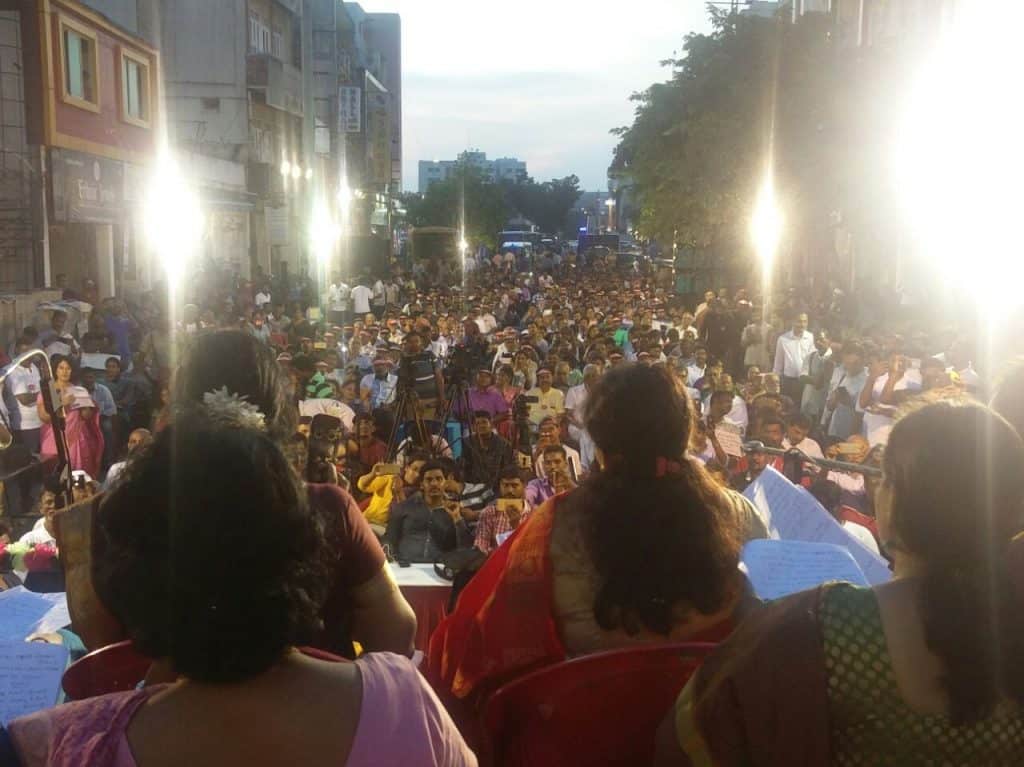 The women were now going from strength to strength. On March 19, 2017, they were invited to participate in “Coffee with MLAs”- a programme organised by the anti corruption movement Arappor Iyakkam, to ostensibly meet and question the MLAs who had chosen to back the Sasikala faction. Not one MLA turned up, but over 1500 people showed up to hear VOP enact a powerful skit on corruption in public life, and their anthem – a catchy anti-corruption ditty they have composed themselves!

Last week, at another anti-corruption event called Kollaiyane Veliyeru, Voice of People released a song parodying several politicians and asking for an end to corruption. In the run up to the event, the song was viewed over 20,000 times on Facebook! (At the time of publishing this article – a week after release – the song had been viewed on YouTube over 287,000 times)

What started with a core group of 10 women now has around 50 members committed to devoting time and effort to the mission. Encouraged by the response to their activities, and against the backdrop of impending councillor elections for the city of Chennai, VOP has decided to focus its energies on preparing a ward manifesto for  a few designated wards in Zone 13, where a majority of its members live.

Their collective logic for this focus is simple: We see problems around us every day, but we choose to only complain and do nothing constructive about it.  What happens in our neighbourhood affects us all immediately and every day, and so we have an overarching responsibility to step up and take part in improving the same. We all need to participate in improving the condition of our streets, wards, localities and constituencies.

To this end, the group has met several times, researched extensively and come up with an exhaustive survey to assess the condition of various parts of Zone 13. They are now reaching out to people across the zone to take the survey, either online or offline.

The survey is well designed and easy to complete – anyone who lives in Zone 13 of Greater Chennai Corporation may take the survey, and anyone outside Zone 13 who wishes to do something like this, may well take it and draw up a similar one by changing the ward numbers in the drop down menu.

From the findings of the survey will emerge a Ward Manifesto, which the Voice of People will submit to the Councillors, once they are elected.

The group speaks as one, and no one person wants to be singled out for praise. It is very evident that their zeal and passion for bringing change to Chennai, is being recognised by other agencies. They have recently been sought out for their help in designing solid waste management practices for the Zone, and to support an environmental cause through their music and skits.

They are very active on social media, and tweet under hashtags such as #VoiceofPeople, #ConcernedCitizensCall and #ReclaimTN.

In the future, Voice of People hopes:

Every woman in that group is acutely aware that this vision sounds daunting, but equally everyone of them is confident that it is achievable, and a good start has been made by changing how we have behaved as voters.

If you wish to know more about Voice of People, please email them at concernedcitizenscall@gmail.com

If you are a resident of Zone 13 and would like to take the survey designed by the group, click here.

From how and where to get your Smart Card, how to link it to Aadhaar, or how to change your details in the card — this guide will answer all your questions about the modern alternative to your ration book.

If you’re in Manali, this is why you are always coughing!

Or in Ennore, for that matter. Heavy and polluted emissions from the petrochemical, thermal and fertiliser plants in these areas of north Chennai are taking a heavy toll on health of citizens. Respiratory and skin diseases are the most common.

The Archaeological Survey of India has marked certain areas in Pallavaram as ‘protected’ and ‘ regulated’ after identifying them as megalithic sites that could aid research on ancient habitation.