On March 18, 2017 I visited a water body in GKM Colony located right next to the K5 Police Station (Peravallur), Jawahar Nagar in response to a request from Arappor Iyakkam to conduct an audit on the city’s water bodies. There were some workers who were involved in spraying chemicals and were also at the same time removing the floating garbage from this particular pond, which is called the Vannankuttai.

A storm water drain (SWD) was found to be discharging untreated sewage directly into the Vannankuttai through a circular pipe, as you will see in the following image: 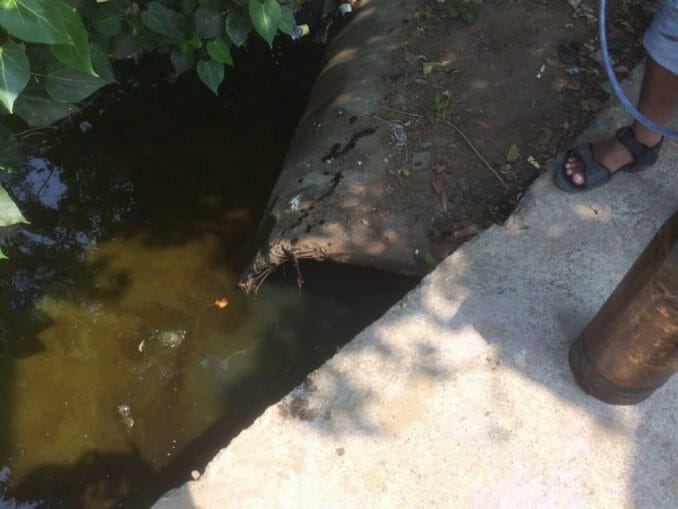 Summer was upon us, and I was left wondering as to how this water body had so much water when other lakes and ponds around the city are almost dry. Also, the SWD is supposed to discharge or carry flood water during rains; there have been no rains in the recent past, so where did the water come from? 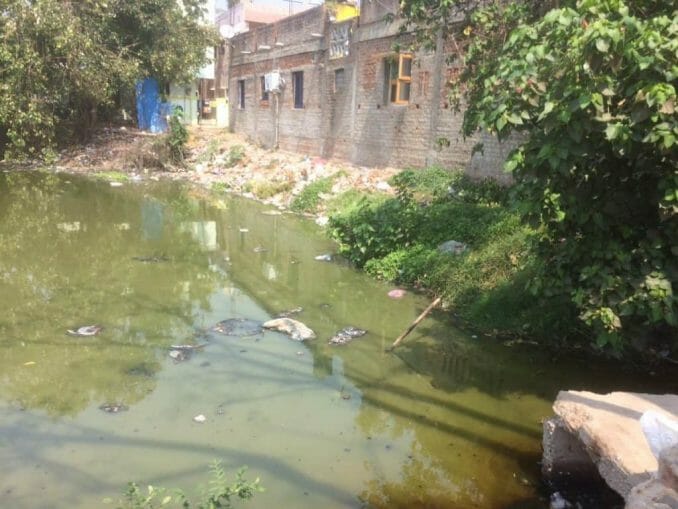 Yet another disturbing finding was that several temporary toilets for the public had been set up directly on the banks of this water body. When the untreated sewage is being discharged through the SWD into the pond, any one can guess where the water from the portable toilets is going. 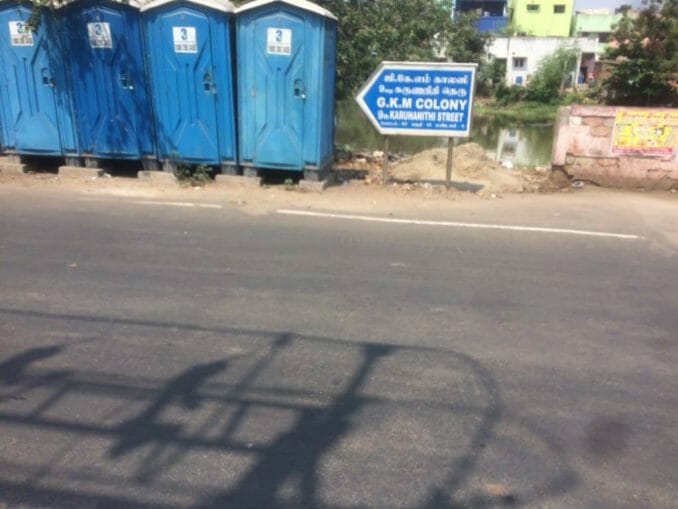 Next, I got to speak to the workers who told me that the main culprits here were the CMWSSB. I was given to understand that sewage from the neighbouring houses and commercial establishments are also being let out directly into the Vannankuttai. From time to time garbage and debris are dumped into the water by the residents of the neighborhood.

The workers are forced to clean up the water body every few days and there has been a total lack of will on the part of the administration to take any corrective action, despite complaints from several social activists.

Indeed, when I Googled for further information, I saw an article already published by The Hindu raising concerns about the sustainability of the Vannankuttai. I returned home and filed a petition with the Greater Chennai Corporation and also posted some articles concerning the same on social media to draw the attention of more people and also relevant NGOs and media.

A few days ago I received a call from Arappor Iyakkam, who wanted to come down personally to inspect the location. I accompanied them to the spot and noticed some changes. Firstly, the toilets on the banks of the pond had disappeared, though we could see a lot of debris and garbage in the water.

When we enquired with some locals in the area, we were told that both the pipes leading into the lake were Storm Water Drains, but there were a few illegal sewage connections into the SWD leading to discharge of sewage in the pond.

During our conversation, local residents further informed us that there used to be a similar pond on the other side of the road, interconnected with the Vannankuttai until a few years ago. This has been filled up with debris and now pucca buildings have come up on the site with official power supply connections.

Having visited the site and seen and heard all of this, one cannot help but raise the question, Where is this country, and in particular its cities, headed? Does anyone within the administration or outside care for the law of the land? If we are going to close our eyes and allow scoundrels to squander our national resources, it would be an absolute shame.

This issue, like so many other similar ones, needs to be investigated on priority and the concerned agencies in the government must take necessary steps to restore the Vannankuttai and all other water bodies staring at the same fate.

As the city reels under the stress of unavailability of adequate amounts of clean and safe potable water, Chennai’s water bottlers grow a thriving business.

It has been a year since the pedestrian plaza at Pondy Bazaar was inaugurated. What are the learnings? How can this be replicated in other areas?

Even as the state has sanctioned thousands of crores for restoration of the Adyar river, and the nodal agency CRRT continues its efforts in the face of many challenges, rampant encroachment and illegal disposal of waste leaves the river in poor shape. Will it ever regain its lost glory?