Does it not bother you that Chennai is the ‘accident capital‘ of India? And according to some reports, we have the second highest number of road accidents in the WORLD, after the Brazilian city of Fortaleza! In the year 2015 alone, official records indicate that over 850 people died in traffic accidents. This is likely to be lower than the real figure, since several instances are not reported to the police, and also does not include instances where the person was injured and succumbed to it subsequently.

The list of disturbing statistics is almost endless. Over 40% of the casualties are pedestrians and riders of two-wheelers. over 50% of the deaths are in the age group of 15 to 29. What a tragic waste of life! Equally, research has found that bad driving and driving under the influence of alcohol cause the majority of accidents, not bad roads or bad weather.

And to think that all this can easily be prevented, if we all come together and resolve to make our roads safer. Here is a call to action from Thozhan, a social welfare organisation working in the area of road safety awareness in Chennai. Join hundreds of volunteers who plan to carry placards, distribute pamphlets and paste doom light stickers (to educate about low beam lights) at over 100 signals across the city, on Sunday Aug 7, 2016, between 4 and 7 pm ! They will also enact MIME and street plays in front of the vehicles when the signal is on red. To highlight the dangers graphically, there will be volunteers dressed as Yama, the God of Death, helping the awareness campaign

Register  as a volunteer or as a group below:

Youtube Video – https://www.youtube.com/watch?v=wLIkNoI4EQY
If you are unable to join the campaign but would still like to help, you can contribute at www.milaap.org/campaigns/accidentfreenation
SMS or Call: 9941142188 / 9884966613
Email: trafﬁc@thozhan.org / www.Thozhan.org
Facebook: www.facebook.com/AccidentFreeNation
This is the third year of Thozhan’s road safety campaign. The results of their work, and of several other organisations working for this cause, are coming in slowly, and the trend is encouraging. The number of accidents in 2015 showed a slight decrease over 2014, though it remains high in absolute numbers.
Each one of us must pledge to follow road safety rules, in order to make our roads safer. Be an example to your children, and to young people around you. Wear a helmet while riding a two wheeler (even the pillion rider). Always wear your seat belt in a car – everyone including the passengers in the back seat. Do NOT drive on the wrong side of the road, even if it is a very short distance. Let pedestrians, especially senior citizens and children, cross.
Remember, it is better to go forty minutes late, than to go forty years too early. 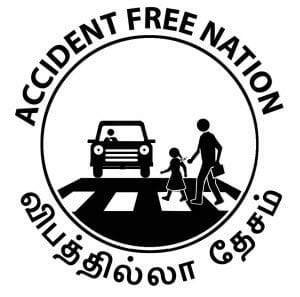 Over 18000 families have been shifted to resettlement colonies in Chennai since 2015, 99% without any legal notice. Some key findings from a recent report

Managing waste in Chennai: The way ahead

Hear a diverse, eminent panel discuss the prime concerns regarding waste management in Chennai in the wake of COVID and possible solutions.

Affidavit filed by official shows that the state transport unit suffered a loss of Rs 2981.57 crores in 2016-17. No wonder MTC workers have been left in the lurch over wage revisions and pension payments.