While a majority of residents of Chennai are grappling with the task of segregating waste before disposal, here is ward 173 that has reinstalled a biogas plant which supplies fuel to the Amma canteen located in the same premises. The food and fruit/vegetable waste from hotels in the vicinity is collected and used for generating the gas.

“To my knowledge, the biogas plant was installed in 2014 and was inactive over the last three to four years. It feels good to have a change-agent among us, as Assistant Executive Engineer (AEE) Sathish Kumar has taken active steps to restore the plant,” says Ganga Sridhar, a member of Raja Street Residents’ Welfare Association, Mandaveli.

Owing to technical glitches, the biogas plant had been lying unused for quite some time. The incumbent AEE took upon himself the task of restoring it, when he was posted to Zone 13 in November 2017. A tender was floated, a deal was struck with Cryogenic Process Control (CPC) and the plant was renovated at a cost of Rs 9.7 lakh.

“The plant has the capacity to treat 750 kgs of waste collected from the restaurants, households and market located nearby, and we are presently collecting about 500 kgs that give 6 to 7 kgs of gas,” said Sathish Kumar.

Working mechanism of the plant

At present, cow dung, tree, food, vegetable and other organic waste are collected from the nearby residents, temples, markets, restaurants and eateries within the zone. The conservancy workers of Ramky Enviro Engineers collect the garbage and bring it to the plant. 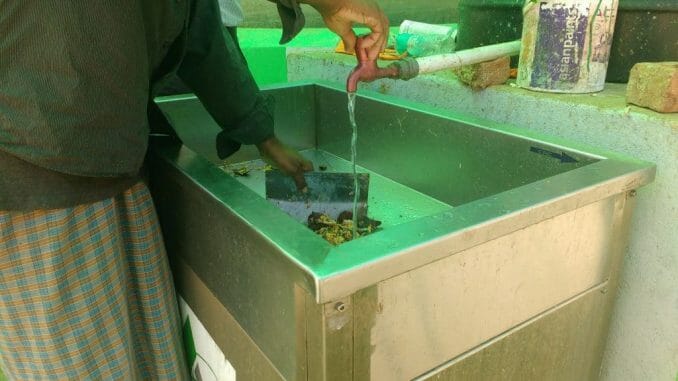 Treatment of the raw materials with water. Pic: Bhavani Prabhakar

The waste is treated with water in the ratio 1:1. The treated raw material is then passed on to the inlet chamber through the submersible crusher. The waste is processed in the digester, where the gas is extracted and goes straight to the Amma Kitchen through the attached tube line. Of course, all of it is possible because the waste collected is segregated at source, and care is taken that it is not mixed with plastic or paper.

“Presently, the plant produces 0.03m3 of gas for every kilo of raw materials fed,” explained Arun Kumar M of Cryogenic Process Controls (CPC), who was at the plant for training personnel in operations. 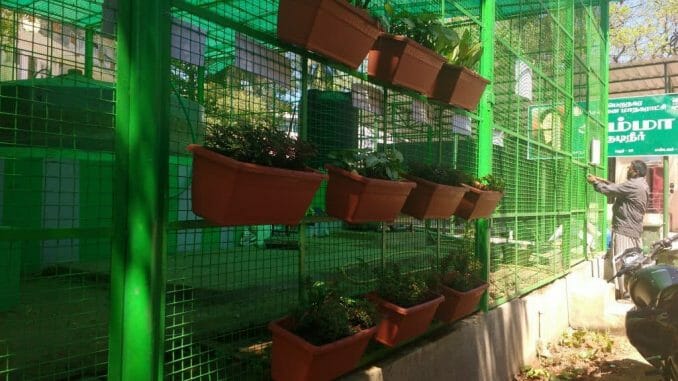 The sludge is used as manure for the organic plants being cultivated in the same premises. Pic: Bhavani Prabhakar

The slurry that gets deposited in the storage tank is proposed to be recycled, and used for treating the waste. The solid particles would be used as manure for the plants that are cultivated in the same premises. “A Reverse Osmosis (RO) plant is being set-up, the work is expected to get over in a few days,” added Arun Kumar.

Cylinder consumption at the canteen

The Amma canteen that shares the same compound was established in 2017 and was using one cylinder of 17.4 kg gas per day for consumption. The canteen makes around 600 idlies, 3 kg Pongal, 5 kg rice and 400 chapatis every day. In total, There are six burners in total, among which two burners are connected with the biogas supply.

Nithya S, in-charge of the Amma Canteen, explained how she has been trying to reduce the number of store-bought LPG cylinders. “I’m trying to reduce the number of cylinders bought from the providers after the establishment of the biogas plant here. There is a separate burner to make chapati which is not connected with biogas. I order up to three or four cylinders every week. In February, I bought 16 cylinders, 22 in January and 24 in December. The burner that is connected with biogas, burns for three hours with which we cook 5 kg rice for lunch.”

Talking about how others can adopt such a plant and maintain it, Sathish Kumar added, “All it needs is 600 – 800 sq ft space roughly. Maintaining the plant is not a Herculean task, rarely are the motors dysfunctional, and if they do have problems, they can be repaired immediately. Currently, there are two people to transport the garbage from the restaurants and other places, two more people working on operating the plant. The plant will be maintained by us entirely once the technical person from CPC trains the staff here.”

Why are patients struggling to find hospital beds in Chennai?

How does bed allocation work in Chennai? Do helplines work? How can we be cautious, yet not overload the system? A volunteer talks to a doctor and shares tips.

Will privatisation of waste management make Chennai a cleaner city?

Following the uproar among conservancy workers, the Chennai Corporation has postponed the invitation of bids for privatisation of garbage collection. But what does history say about the effectiveness of such a move?

Nature-based solutions: The answer to flooding in Chennai?

What are nature based solutions and can they play a role in reducing flooding in Chennai? What do such projects currently underway aim to achieve?