I have been fortunate to be associated with two great noble minds in my life. K S Padmanabhan and S Muthiah. I joined Mr Padmanabhan’s EastWest Books in my early 20s. EastWest started operations in Madras at that time dealing with distribution of general and technical books, which later on took several ‘avatars’ and is now Westland Publications, a part of Amazon.

During my tenure with the company, I came in contact with Mr Muthiah whose book Madras Discovered was published by EastWest, first as a small booklet and then on to a much larger edition with historical facts and figures. It served as a guide book not only for travellers but also for those living in the city unaware of its heritage. It is gratifying to know this small booklet is now available in its 8th edition with additional matter and  more photographs.

This daunting task was completed by Mr Muthiah very painstakingly even when he was unwell. I used to visit him over a period of time and he would explain the corrections to be incorporated in the new edition. Subsequently EastWest was his publisher for several of his books on the heritage and history of Madras. He always preferred to call it “Madras” as do many of us even now.

Madras Book Club was started in a small way with four stalwarts of the publishing industry, Mr Abdullah, Mr Krishnan, Mr Padmanabhan and Mr Muthiah. They used to meet in the bookstores and have tea and biscuits and discuss books. Later on with the help of the Kumars (Mr S N Kumar and Mrs Sushila Kumar) of the British Council, the Book Club stabilized and found a permanent venue at the Connemara.

As a part of their corporate social responsibility they used to charge us a nominal amount for the sumptuous spread of tea for our meetings. We then started a minimum subscription for the members as well as a bank account. But till date we do not have a president, secretary or treasurer to run this outfit. This was started as a trust to promote reading and inviting eminent personalities in the literary field to share their thoughts. 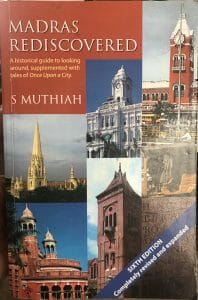 Mr Padmanabhan and Mr Muthiah were instrumental in running the Club with a few of us as volunteers. They used to discuss and decide on the speakers for the month and we have had such enlightened speakers thanks to their initiative. I used to be part of their luncheon meetings sometimes. Mr Muthiah loved to try out new restaurants and so did Mr Padmanabhan. Less talk and more food would be the order!

On Mr Padmanabhan’s demise, Mr Muthiah became the anchor for the activities of the Club. Every meeting would be meticulously planned, from fixing the date to the final execution. The first draft would be sent to him and it would promptly be sent back with corrections on the words, fonts, punctuations.

All our meetings were never complete without his presence. If for some reason he was unable to attend, he would ask us to go ahead and depute one of the senior members to be the MC. But his ‘welcome’ address was always something to look forward to. We never got tired of listening to the same message at every meeting, because each time he would say it in a different way.

I remember once when I was inundated with calls and messages about meetings from members and told him so, he announced at the meetings that I should not be disturbed during office hours as this was a voluntary assignment for me, and that if anyone had any questions, they should call my personal number after office hours. He was very particular about certain issues at the meetings and would subtly put them forward, so that no one was offended. If mobiles rang during the meetings, he would say, “those who are members of the club would keep their phones on silence”. During Q&A sessions at the end of the meeting, he would announce, “please put up your hand and I will call you. No statements, only questions.” These were standard statements that every other MC would also follow.

He did not possess a mobile phone. At times, we used to get so worried that he wouldn’t arrive at the venue in time for the meeting. There would be no way to contact him as his assistant at his house would say he has already left for the meeting. So all we would do was wait patiently and sure enough, he would be there on the dot, in time to have a cup of coffee at least. He was a story teller and used to always say that there is a story in each one of us and that we should put it down on paper. He would very patiently and kindly talk to everyone at the meeting in his own jovial way and that was what endeared him to one and all.

Going forward, it is going to be a daunting task for all of us at the book club to go ahead without his dynamic presence, his welcome smile and kind nature. We will miss your physical presence Mr Muthiah, but your voice will always be ringing in our ears.

About Jayanthi Ramesh 1 Article
Jayanthi Ramesh worked in the publishing industry for over three decades. She lives in Chennai and is currently works as a freelance translator.

Caring for heritage: What my grandfather’s house taught me

Pradeep Chakravarthy lives in a house that was built in 1950. What has it been like to match the house to his life in it today, nearly 70 years on? And what has his experience taught him about preserving heritage?

The famous red building of Kilpauk and its forgotten connection

As the city celebrates Madras Day (Week), a resident remembers her favourite ‘red building’ — the Kilpauk Water Works, which stands as an example of engineering brilliance to this day. But is it merely a part of our colonial legacy, or is there more to it?

An engineering student from Chennai and four times National Champion in 3×3 Rubik cube solving with feet, talks about the nuances of speed cubing and its prospects in Chennai