In the early hours of October 23rd, nearly a hundred trees and shrubs were mowed down at Kotturpuram Tree Park (KTP) – ostensibly a “mistake” by a misinformed earthmover operator, who could not have been working there without instructions from the Public Works Department (PWD).  Tree lovers in the city and beyond were horrified and heartbroken. We wrote an anguished piece on the state of trees in Chennai, many other publications also covered the “accident”,  and even the Madras High Court took suo moto cognisance of the incident.

Shaken by the hullabaloo, PWD officials quickly admitted to the mistake and assured the volunteers at Kotturpuram Tree Park that they would repair the damaged area in two days. They also promised to source and plants grown saplings to replace the lost trees, and the NGO Nizhal lost no time in giving them a detailed list of trees and shrubs to be planted. This was on October 24th.

Then came 15 days of complete silence. PWD officials were not able to give any update or information regarding the replantation timeline with Nizhal volunteers, despite persistent follow up. Citizen Matters too tried to reach the PWD Assistant Engineer, but he was unable to give us any details.

On November 15th, T D Babu, one of the trustees of Nizhal,  once again reached out to PWD, and was told that the saplings were “on their way” to the Park. From where? What mode? Who was bringing them? No idea.

In the meantime, with some rains expected in Chennai over the next fifteen days, volunteers have tried to procure saplings of the same kind of native and rare trees that were uprooted or cut earlier. It is important that the saplings be at least 5 feet in height, to ensure their viability and growth.

Finally, on November 16th, some 20 saplings arrived from PWD. Unfortunately, only three of those saplings were suitable for planting in the park. The landscaping contractor to whom PWD had outsourced the work, was requested not to undertake any haphazard planting just for the sake of taking a photograph and updating the concerned officials. (he left the three saplings in the park, to be planted later)

On Sunday November 17th, volunteers and Friends of Kotturpuram Tree Park planted over 85 trees and shrubs, in an effort to restore the area damaged in October, and put up a temporary fence across the bund to prevent vandalism. A roster has been formed for volunteers to oversee the watering as well. If you would like to volunteer for Kottupuram Tree Park, please reach out on Nizhal’s Facebook page. 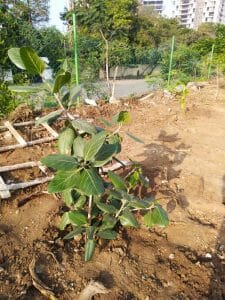 In the meantime, questions remain.

WHO authorized the clearing?
WHAT is the plan for the area?
WHICH department is responsible for the future plan?

WHEN can we, the tree loving citizens of Chennai, expect to see these plans in action?

Metro to link Chennai Central and airport by March 2018

A look at the new connections to be provided by Chennai Metro in early 2018 as well as some key features of the currently operational lines.

ECR residents do not want a storm water drain; here’s why

Residents all along the East Coast Road have come out in protests against the proposed storm water drain network and taken the civic body to court over the project.

A life spent caring for others, even the dead

Meet the phenomenal Roja Sri, a lone woman, who apart from caring for the needy and poor, takes full responsibility for unclaimed dead bodies in the city and performs their last rites.