What do a 91 year ‘young’ activist, and a 40-something marine biologist have in common? A love for this city they call home, and a desire to help its citizens overcome their sense of helplessness in finding solutions to everyday civic problems..

Garbage not cleared? Road being relaid without milling? Storm water drains not cleaned before the monsoon? Electricity cables hanging dangerously in the open? In each of these situations, the solution is at hand. Help is often only a phone call away. But if we ask the average citizen on the road, the most common response will be  – I don’t know what to do!

This is the kind of situation that the founders of SPARK, a civic forum, want to help find a way out of. Founded in 2012, by Kamakshi Subramaniyam (known to locals and officials as Kamakshi Paati) and T D Babu, SPARK helps citizens tackle civic problems head on, approach the right officials, lodge complaints with evidence, follow up at regular intervals, and ensure that it is solved. Their persistence and commitment has ensured the resolution of many such issues in areas like Adyar and Besant Nagar, under Zone 13 of GCC

As Babu says, “Solutions may be delayed, but they cannot be denied.”

SPARK began with the scientific restoration of the Karl Schmidt memorial at Elliots Beach in Besant Nagar. Erected in 1931 to honour the memory of a young Dane who lost his life while saving others from drowning off the beach, the memorial had fallen into disrepair owing to lack of maintenance by the civic authorities and the indifference of citizens.

Working in collaboration with IIT Madras’ Department of Civil Engineering and renowned archaeologist Satyamurthy, SPARK catalysed the preparation of a comprehensive restoration plan. The Greater Chennai Corporation sanctioned Rs 34 lakhs for the project, and the Danish Ambassador came forward to help too.

The beautifully restored monument, is sadly once again in need of maintenance and protection – something that SPARK continues to fight for.  “Though higher officials in all government departments give their consent in principle,  execution by field officials is a big challenge for us. Still we never give up,” say members.

Among other examples of SPARK’s initiatives, they persuaded the civic authorities to cancel the construction of storm water drains in the Besant Nagar area, since it had sandy soil and mere percolation pits would do the job just as well, thereby saving several lakhs of public money.

They have insisted on milling of their roads before relaying so that the height does not increase and cause flooding during the monsoons.

They have insisted on roll back of wasteful expenditure relating to roadside beautification. They have encouraged the formation of more and more resident welfare associations (RWA) in the area and helped them find their feet. Over 30 RWAs are now part of the SPARK network.

SPARK organises drives to sensitise local residents to the need for preserving the biodiversity of the area’s beaches, and campaigns for noise-free and litter-free beaches.

They have helped increase awareness about civic responsibility, law and order, rightful use of public spaces, etc. through awareness walks, meetings amongst citizens and with senior officials such as the Mayor, Police Commissioner, local municipal officials, etc

Not an easy journey

There have been some negative experiences along the way, for sure. Once Kamakshi Paati came across a group of well dressed, seemingly educated young people, littering the beach with food items and paper. In a bid to embarrass them into action, she picked up the garbage and took it to the nearest bin. Imagine her horror when the youngsters, instead of joining her, pointed to some more garbage further down the beach, and suggested she clean that as well!!

Babu also rues the fact that people are unwilling to take initiative and complain against civic authorities, for fear of getting into ‘trouble’. Recollecting a few instances, Kamakshi Paati says, “My neighbours ask me to complain even if there is a power cut. Why can’t they call the officials themselves? Our motive is to change the ‘why-should-I’ mindset among people.” 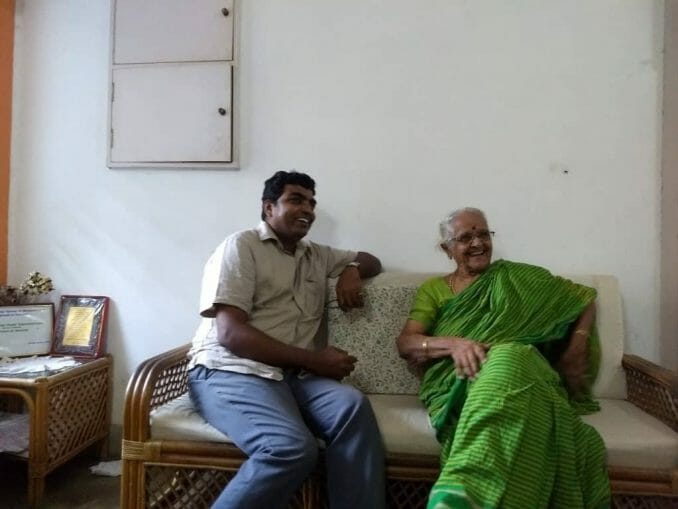 In an example that showcases their perseverance, Babu, who lives on Shastri Nagar 4th Cross street says, “I am against laying the roads without milling. Every time the contractors came to relay the surface of our street, I objected.”

This made him unpopular with the Corporation officials and the locals, but it also helped many of his neighbours understand the importance of milling. “Water stagnates if the road is not relaid. But it enters people’s homes if the road is laid without milling. Which is worse?” questions Babu.

It took him twelve years to achieve the task: A new road after milling the old one. Solution delayed, but not denied.

A lot to learn

Kamakshi Paati uses her age and her wit, to convey her message, and her sense of humour is well known among the locals. When she heard some time ago that the budget to construct a roadside park at the S bend along the Blue Cross Road was pegged at Rs 7 lakhs, she called the local councillor and congratulated him: “Sir, I heard you are constructing walls for the park, and they will be coated in silver! It is good news.”

The councillor immediately got the hint.

“They proposed this budget for a space that can accommodate just a tree. When we showed the pictures to the Assistant Commissioner Palanisamy, he was shocked and reworked the budget,” says Babu.

Kamakshi and Babu make a good team. While Babu leans on her wisdom and uses her age as a way to get through to officials, Paati relies on his expertise on the subject of conservation and his diplomacy skills.

Shortly after inception, they were joined by two key people key to the team, Raji and Pattu Chandrasekhar, and since then the team has grown to include 30 core volunteers.

While speaking to us, Kamakshi Paati received a call from a corporation official who had attended to an issue raised by her. She praised him for his prompt action and thanked him profusely. Turning to us, she emphasised,”Just as we complain when work is not done, it is very important to recognise when the work is done, and thank the concerned officials. That is the key to our rapport with the Corporation Officials, and the key to getting work done.” Wise words indeed.

Babu adds, “Spark always believes that joining hands with the government, rather than confronting, can bring more good change.”

[SPARK founders can be contacted at: +91 9884114721 / +919940061810 or sparkwecan@gmail.com.  Members of SPARK Civic forum help citizens keep track of their complaints and press for solutions and responses from the authorities.  Please reach out to them if you are facing civic issues in your neighbourhood.]

Poor maintenance has made play areas in an Adambakkam park unusable. Similar issues across Chennai parks must be recognised and addressed.

Her mornings go in clearing garbage in Kotturpuram’s streets for Chennai Corporation, but Rita akka, a differently-abled contract worker, spends her evenings feeding and talking to her canine companions.

Urban voters have often been berated for the low polling percentages recorded across cities. But is the percentage really that low? And are there procedural issues that could be the reason? Mahesh S T analyses the Chennai rolls.