Chennai’s character is defined by its resilience. The city powerfully rose to the occasion when it was hit by floods in 2015. Nature was not any kinder in 2016. Cyclone Vardah stripped the city of its green cover in December 2016. At least one lakh trees were uprooted in Chennai during Vardah, resulting in about 21 to 28 percent loss of green cover.

It was observed during Vardah that native trees survived the disaster but exotic trees perished in the calamity. This is because the former have a deep-rooted system while exotic species generally have shallow roots and cannot withstand strong winds. Experts also say it is especially important for Chennai to plant native trees that are fully adapted to coastal conditions. 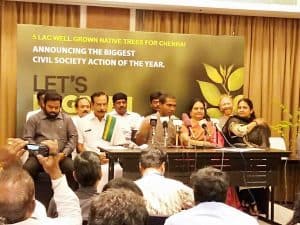 With a view to popularizing ReGreen Chennai, the movement will organize 100 conferences across the city in various schools and colleges, and hold three marathons for the purpose. “We hope this will raise awareness on native trees. We also have plans to educate the people on handling natural disasters. Volunteers who are familiar with disaster management are being trained for this purpose”.

“Before monsoons this year, we hope to plant one lakh trees with heights of not less than 4.5 feet. We also encourage organisations keen to build green cover to be a part of this project and are willing to guide them. We have also plans to reach 100 villages around Chennai and build green cover in the suburbs too,” Gasper says.

ReGreen Chennai will also set up temporary places where common people can obtain native trees to plant in their neighbourhood. The organisers will ensure that proper steps are being taken before planting a tree so that it has a greater life. “But above all, we hope this project will help restore the farmers’ emotional connect to the city” Gasper says.

The task might look daunting but Chennai is ready to take on.

Chennai’s public libraries beckon — have you visited any?

Chennai has a total of 162 libraries open to the public. While the Anna Centenary Library is the most popular, for its modern infrastructure and ambience, others are also putting up a gritty fight in the age of tablets and e-book readers.

While the Chennai Metro Water site displays a vibrant water and sewage network plan in place for the OMR IT Corridor, no one, not even officials seem to know the actual status of these projects.

A look at the World Bank-supported Gender Lab project and how it proposes to enhance gender safety in public spaces in Chennai.