The Annual Panguni Thiruvizha is here again! The festival will begin with Dhwajarohanam (flag hoisting) on March 22 and conclude with Thirukalyanam – the celestial wedding of Kapaleeshwarar and Karpagambal, on March 30, 2018

The annual festival takes place in the month of March at the Mylapore Kapaleeshwarar temple. The highlights of this very prestigious temple festival are the Thiru Ther (temple chariot) and the Arubathu Moovar day, when the divinity of the aura around Mylapore multiplies with the 63 Nayanars being carried around in a procession in colourful palanquins. Thousands of people come from all over and outside Chennai to behold the Arubathu Moovars.

Another highlight of this festival is  large scale Annadhanam (distribution of food) by vendors and residents. The Annadhanam  takes place not only around the temple Mada veedis (main streets in the temple square) but also in almost every street of Mylapore. While the intention behind this is very noble indeed, it has also led to large scale food wastage in the past few years  and massive littering of the area during the festival.

Walking down the streets after the festival would mean walking past mountains of food waste, disposable plates and plastic cups strewn all around the area. The clean-up task after the Arubathu Moovar day has been a mammoth task for the conservancy staff of the Greater Chennai Corporation and volunteers.

For a cleaner festival

The Kapaleecharam volunteer group is a People’s Federation whose mission is to make the Mada streets litter-free, eco-friendly and pedestrian-friendly. Last year in an attempt to reduce food wastage and littering, this group organised multiple meetings with the Chennai Police and GCC, requesting their planning and logistical support. 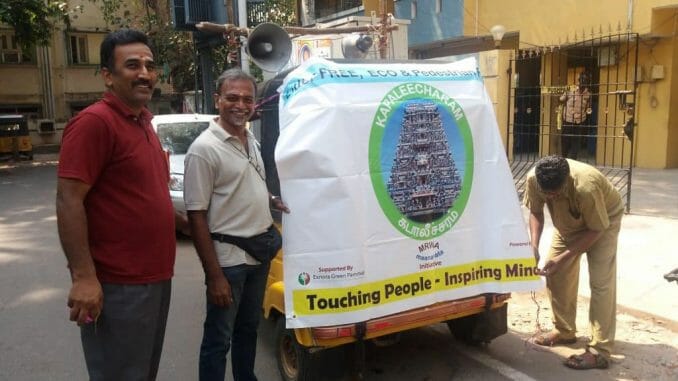 One of the novel ideas they used, was an autorickshaw  that went around all the streets of Mylapore, Mandeveli and Raja Annamalaipuram, playing lively Kapaleecharam Thooimai (cleanliness) songs. The songs, and the announcements in Tamil that followed, sent out strong messages to the public, requesting them to avoid food wastage and throw garbage only in designated bins.

Volunteers organized themselves into groups, met various donors before the festival and requested them to follow guidelines. On the day of the Arubathu Moovar festival the volunteers went around the Mada veedis requesting the devotees to dispose the plates in garbage bins and donors to regulate the quantity of food. Many volunteers went on to start cleaning the littered areas themselves.

Kapaleecharam is getting together once again this year, to try their best to keep the Mylai area litter free during
the festival. One major problem faced last year was the shortage of garbage bins to hold the plates and cups, causing a major bottleneck for the volunteers. The numbers have been increased significantly for this year.

Various initiatives have been planned to spread awareness through walks and posters,  and arrangements are being made for garbage collection bags/bin at regular intervals. Volunteer groups from all over the city have been invited to join hands to help organize a Zero waste, litter free Arubathu Moovar.

The team has also requested the police and Corporation to support them. The Mylapore MLA, Former DGP Natraj  has also announced his support for the initiative, and issued an appeal to devotees and citizens as below:

The following Advisory is being circulated to all Annadhaanam donors/devotees

About Ganga Sridhar 3 Articles
Ganga Sridhar is an active volunteer for SWM Initiatives in Chennai, and a member of Kapaleecharam.

Your inputs could help mitigate flooding in Chennai. Find out how

How can GIS mapping help tackle flooding in Chennai? Here’s how, and you can add to Care Earth Trust’s crowdsourced flood map too.

Yazhini, Councillor of Ward 135, talks about her goal to make her ward Singara Ashok Nagar. She aims to reform schools and improve sanitation.

Coming soon: A map and masterplan for Chennai toilets

Chennai gears up for a Toilet Festival and a toilet fellowship organised by Recycle Bin. The team lays out the steps to create a toilet masterplan.