The week-long celebration commemorating Madras Day, which falls on August 22, is a fun way to learn about the rich history of the city. A plethora of activities are held over the course of a week (indeed, these days, it is almost a month) that are informative and engaging. The most popular among them are the heritage walks that trace the historical roots of Chennai, formerly Madras.

The Dravidian Historical Research Centre organised a Social Justice Heritage Tour led by the editor of Nakheeran Magazine, Govi Lenin. The tour traced the origins of the Dravidian social justice movement in the city, beginning with the early days of the Justice Party.

The tour was a trove of information. And so we decided to share some of that with our readers through a quick Q&A. How much did you really know about Madras and her Social Justice Heritage?

Why was the Justice Party so called?

A newspaper produced by the members of the party was called Justice, giving it the widely-used moniker.

The formation of the party, by leaders Dr T M Nair, Natesa Mudaliar and Sir Pitty Theagaraya Chetty, was the result of the need to secure representation for non-Brahmin communities, that had been sidelined in the spheres of education and administration. It was known officially as the South Indian Liberal Federation.

The tour began with stops at a historic spot, currently under renovation, which was the site of the first meeting and formation of the Justice Party, on November 20, 1916. The iconic spot is none other than the splendid Victoria Hall.

As Govi Lenin detailed the contributions of the Justice Party, the participants of the tour had some interesting questions. One member raised the issue of the Justice Party being perceived as anti-Brahmin, but Lenin clarified that the stance of the party was to seek representation for non-Brahmins, as opposed to espousing anti-Brahminism.

He is said to have come up with the idea of serving mid-day meals to school children. Who is he and where in Chennai would you find his statue?

At Ripon Building, home to the Corporation of Chennai, the second oldest in the world, stands a statue dedicated to Sir Theagaraya Chetty. He served as President of the Corporation between 1919 and 1923 and is credited with the idea of serving mid-day meals to school children.

The first midday meal in Chennai was served in the corporation school in Thousand Lights in 1920. This idea then took wings under successive governments to become a universal and much lauded scheme across the state.

Where is the college that is run by the estate of Theagaraya Chetty?

The next stop on the tour was a college in Old Washermanpet, the still-functional Sir Theagaraya College.

An educational institution founded in 1897 by Theagaraya Chetty and his father, as a school for the less privileged locals, it was transformed into a college in 1950 by his grandson. The members of the Justice Party rooted for increasing access to education among communities that could not avail such opportunities.

Natesa Mudaliar also ran Dravidian Home, a hostel for students from marginalised communities pursuing higher education. This was a much-needed facility as students from many communities did not have access to hostel and mess facilities, owing to discrimination.

Which leader’s houses were connected by a bridge?

Next, the tour group moved to get a glimpse of the old home of a Justice Party leader on Balu Street in Old Washermanpet. The unique nature of his house becomes immediately apparent as a bridge connects two structures across the street. The family owned two houses and used the bridge to get across the street from one house to another. Only one of the two houses exists now, the other having been demolished. A departmental store stands in its place. 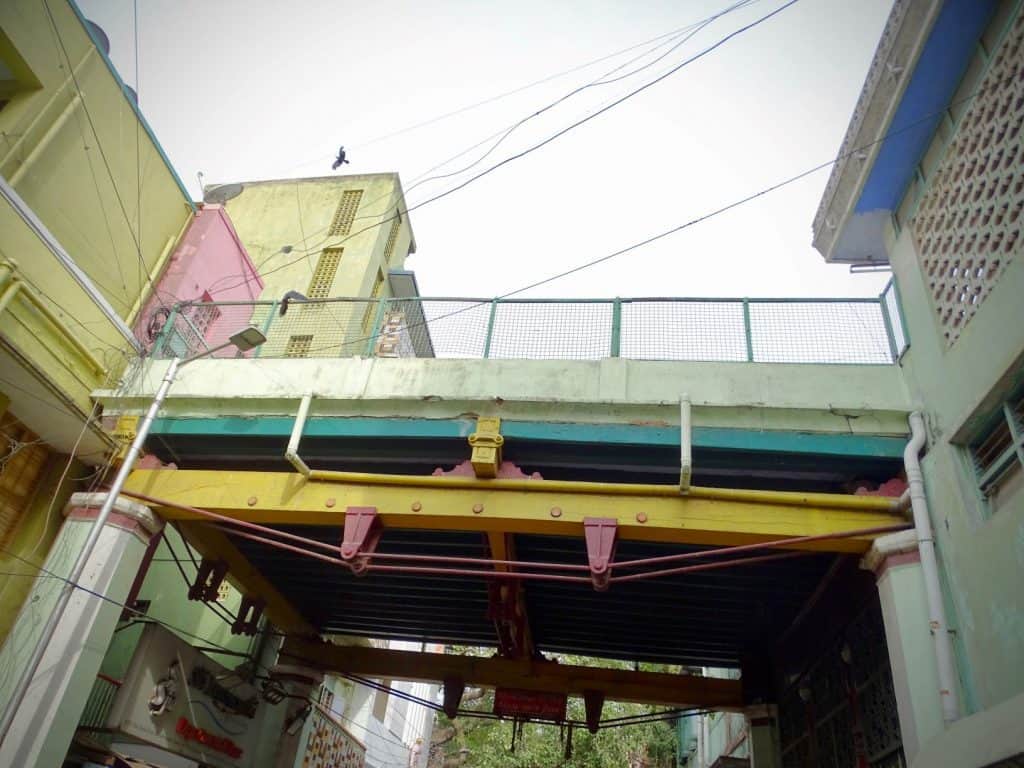 The bridge connecting the houses. Pic: Meera KThe facade of the poorly maintained house betrays its once palatial look.  The tour group convinced the watchman to allow us to get a glimpse of the interiors, where many meetings that set off key reforms by the Justice Party are said to have taken place. The high ceilings and peeling paint and old furniture revived memories of a bygone era.

The house belonged to none other than Theagaraya Chetty.

Where did the DMK’s first meeting take place?

Robinson Park in Royapuram, now known as Arignar Anna Poonga, is where the historic first meeting of the Dravida Munnetra Kazhagam (DMK) had taken place.

The tour group made a leap in the historical timeline and arrived at the park. On the way to the park, we were told about the changes and splinters that occurred in the Justice Party, after the passing of the old stalwarts including Theagaraya Chetty. The movement was then helmed by Periyar from 1938.

Periyar was opposed to entering electoral politics as he was of the view that winning votes would most likely entail compromise on their ideology. A fracture thus emerged, resulting in the birth of the Dravida Munnetra Kazhagam under the leadership of C N Annadurai. The meeting marked the beginning of the era of Dravidian parties in Tamil Nadu’s political landscape.

At the historical meeting, Annadurai is said to have claimed that while the new party will participate in electoral politics, this does not put them at odds with the ideas espoused by Periyar and leaders of the Justice Party and the Self Respect Movement.

Where was the DMK’s first headquarters situated?

The final stop of the tour was at the first headquarters of the Dravida Munnetra Kazhagam. Now a wedding hall, the building served as the meeting ground for the early success of the DMK. It is better known as Arivagam, the house of knowledge.

The face of three leaders – Periyar, Annadurai and Karunanidhi – can be seen prominently displayed on the front. It was here that the anti-Hindi agitation took shape. After the party’s headquarters was moved — first to a place at the Omandurar estate, and subsequently to Arivalayam, where it operates now — Arivagam was converted to a wedding hall. A solitary watchman stands guard at what was once a hub of the social  justice movement that shaped this state.

About Aruna Natarajan 177 Articles
Aruna is an Associate Editor at Citizen Matters. She has a BA in Economics and a PG Diploma in Journalism. She has also worked in a think-tank on waste management policy and with a non-profit in sport for development. She writes on civic issues, governance, waste, commute and urban policy. She tweets at @aruna_n29.
Twitter

Over 18000 families have been shifted to resettlement colonies in Chennai since 2015, 99% without any legal notice. Some key findings from a recent report

How can MTC win back Chennaiites as fuel prices surge?

As petrol prices surge, what can the MTC do to attract passengers to Chennai bus service? How can MTC operations be improved?