The warning bells have been ringing at a high note for quite some time now. Chennai has just gone through the longest spell of rainless days, as a result of which water levels in our water bodies are at an all time low, causing a severe drought. However the government of the day seems to be in absolute denial of any water crisis in Chennai, nor do their actions indicate any move towards a sustainable and resilient Chennai.

Arappor Iyakkam has come forward to highlight this issue through people’s participation in a unique protest called ‘KeluChennaiKelu’ on June 30 2019 Sunday at 9.30 am. 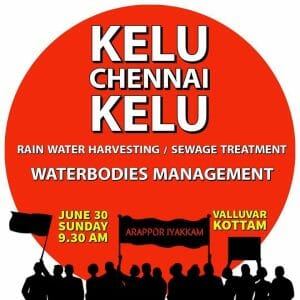 Arappor had previously organised ‘KeluChennaiKelu’ after the 2015 floods, when residents of the city and officials of the Chennai Corporation came together on a single platform to network better, which enabled several important actions to be taken at a rapid pace in order to reduce the flood impact on citizens. This time at ‘KeluChennaiKelu’ we will discuss and understand the reasons for water scarcity.

The topics discussed will broadly be classified into three categories, namely :

This deliberation is not only about asking the government for answers, but also asking people to pledge to do their bit to conserve water and to take up rain water harvesting and other water conservation techniques on mission mode. To ensure that everyone realises the importance of such action, we must make an objective assessment of the water scenario and ask ourselves, What brought us here?

Is Chennai naturally a drought-prone city?

Let’s look at some key numbers to understand this better.

Chennai’s annual requirement of water is around 11 TMCFt of Water and the four lakes supplying water to Chennai — namely, namely Chembarambakkam, Puzhal, Poondi & Sholavaram — have a capacity of 11.257 TMCFt of water storage. If these four lakes were desilted and maintained as needed, then they could have supplied the lion’s share of the city’s water needs themselves.

However, as per an RTI response received by Arappor Iyakkam on the subject of desilting, around 2 TMCFt of silt has been deposited in these four lakes over an extended period and that translates roughly to two months of water supply for Chennai. If only the authorities would have desilted these lakes, then there would be high chances of excess water storage leading to supply for another couple of months.

Chennai and its surrounding areas were traditionally home to 3600 water bodies, a majority of which have shrunk in size or have completely disappeared due to encroachments and  garbage dumping. Chennai is also home to three rivers: Adyar, Cooum and Kosasthalaiyar along with Buckingham canal which runs through the city, making it a unique city with a wealth of water distribution channels and adequate drainage. However, these rivers too have been reduced to mere channels for dumping untreated sewage, making the water unfit for human consumption or even aqua life.

As a 2017 audit report released by Arappor Iyakkam, around 1073 MLD of untreated sewage is being let out into the water bodies. If only the sewage was treated and sent into these rivers, the CMWSSB could well be using the river water for consumption today.

A recent audit by NCCR on the beaches of Chennai indicated that the water was contaminated with such high levels of E.Coli bacteria that taking just a dip could be extremely damaging for health. All this is entirely the result of untreated sewage.

The sight of colourful water pots dotting the street corners is a common sight in Chennai today. Our own audit at slums across the city shows that a family gets not more than 2-3 pots of water per day.

With the south west monsoon being delayed by over a week and deficient by 38% as compared to normal, where are we headed? What if Chennai’s rain-feeding north east monsoons turn out to be deficient as well? This truly calls for urgent action and a big water movement to make sure there is ‘Rain Water Accountability’. How else could we explain the fact that a city which experienced a historic flood in 2015 was faced with a drought in 2016?

It is not until we delve deeper into the rainwater data that we realise Chennai is not a rainfall- deficient state at all. The average annual rainfall in Chennai is 1400 millimeters. This gives us 21 TMC of water through rainfall. According to Haris Sultan, an expert on Chennai’s water, the rainfall over the past four years is as below:

Table showing overall land mass and the quantum of water collected in this area and avg rainfall of several years. Source: IMD

The figures clearly point to excess rainfall in one year, one year of average rainfall and two years of low rainfall; however, if you take the accumulated figures, the average rainfall required was met. Even a part of the rain water accumulated in these areas would be sufficient enough to feed Chennai and its surrounding areas.

The second table shows that the quantum of water collected is so huge, that if our 3 rivers were clean and free from sewage and our 3600 water bodies were intact, Chennai would be a water surplus city today! So, is it clear as to why we are asking for accountability for the rain that we receive?

Chennai has the potential to be a water resilient city, but only if we, the people, make it a talking point, take necessary steps and make the government accountable for the water that nature is providing us with.

So, come join us this Sunday and raise the slogan KeluChennaiKelu!

About Prashanth Goutham 5 Articles
Prashanth Goutham has been an active champion of many causes, including children's education, rehabilitation of Sri Lankan kids, anti corruption (IAC). He is currently working to strengthen civic rights in Tamilnadu by volunteering with Arappor Iyakkam. He also volunteers on green initiatives for Nizhal.

Chennai is breathing in plastic, the south more than the north

A study by Pondicherry University in 16 locations across the city found that the developed commercial hubs were more polluted by harmful microplastics.

Metro to link Chennai Central and airport by March 2018

A look at the new connections to be provided by Chennai Metro in early 2018 as well as some key features of the currently operational lines.

Seven reasons why Chennai should have seen this water crisis coming

Severe water shortage has brought Chennai almost to a standstill today, but the writing on the wall has been clear for quite some time now. Here are seven tell-tale signs the state should have taken note of and acted upon.