In the hope that online procedures in the Regional Transport Offices (RTO) had improved and gave the user a smooth experience,  I tried to file an application for the renewal of my driving licence online through the ‘Parivahan’ portal, a few days ago.

I was unable to complete the process and I received a message asking me to contact the local RTO office. 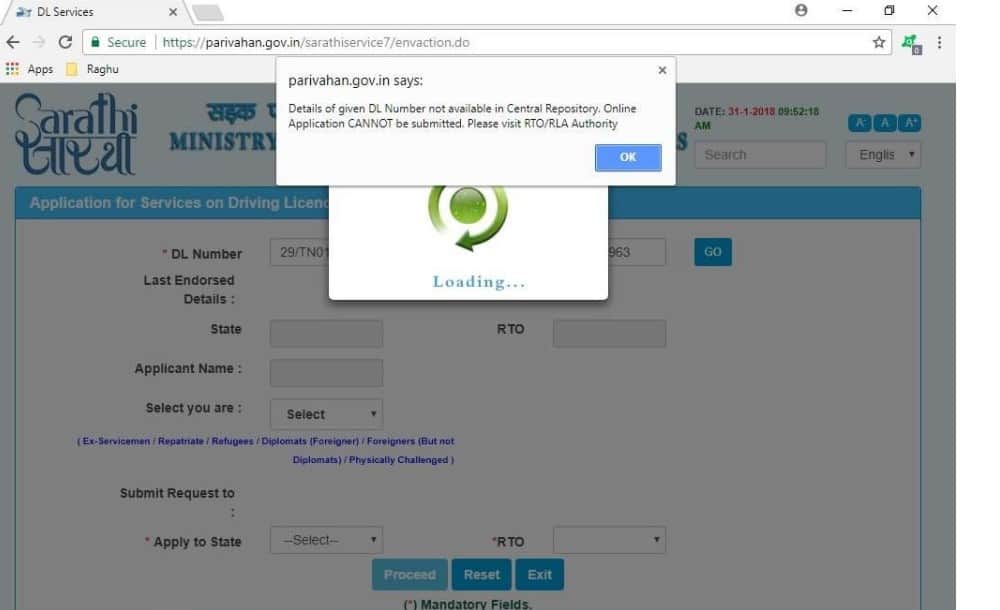 I went to the RTO Chennai (North) early on the morning of Jan 29th to file the manual application Form 9 along with Form 7 as well as Form 1a and a medical certificate, duly completed along with copies of my driving licence, Aadhar card and Blood Group Certificate.

I waited for half an hour and in the meantime, checked with a few of the other applicants on how they had completed the online process for renewal application. Since they were also facing similar issues, I decided to take the help of driving schools or brokers.

The cloud over renewal fees

I approached some brokers sitting outside the RTO who wanted anything between 900 to 1300 for getting the work done. When I asked them why they were charging so much, when the actual fee was only Rs 200 , I was told that the government fees for driving licence renewal had been increased significantly and would amount to Rs 450 to 500 (they promised to provide receipts for the same).

They also mentioned that they would need to pay a small fee at every desk to complete the process and the remaining would be their service charge. Since my licence number had not been updated on the portal as yet, I was told that they would have to contact the concerned official and first get the online update made, and this would take anywhere between 4 to 5 days.

A board bearing the details of the fees related to the various services rendered by the RTO used to be displayed near the billing counter earlier, but this has now disappeared. If fees for licence renewal and other services have indeed been revised after the last revision made around January 2017, how come the new fee details are neither displayed at the RTO, nor updated on their sites? I would really request the RTO to ensure that the updated fee details are prominently displayed near the billing counter as well as on the online portal.

Since the information was not available in writing anywhere, I asked the woman seated at the front desk. She wanted me to go and check with the official at Counter Number 1.  The official there told me that the renewal fee was not fixed and could vary from application to application. This was something very strange, how can licence renewal fee change from one application to the other?

I requested the RTO to ensure that updated fee details relating to the services rendered by the office were prominently displayed near the billing counter as well as on the online portal.

As citizens, we were hoping that the Digital India initiative taken by the central government would help ease several processes, including that of obtaining or renewing one’s driving licence, but it seems things are deliberately kept complicated and there is an absolute lack of interest on the part of RTO officials to help the client.

I felt helpless at the end of my visit and honestly felt it was a sheer waste of time. Is it really too much to ask for a Help Desk at every RTO, with an experienced public relations official who can assist the applicants?

Citizens  would have absolutely no problem if the government really wants us to approach the RTO only through intermediaries — such as the driving schools or the brokers — upon payment of the requisite fees. But then there should be a defined, standard rate that would be charged by such intermediaries for the services rendered by them across the nation.

Let the relevant authorities issue a circular stating such norms as above and regulate the fees being collected by the intermediate agencies, so that one can also expect some uniformity in the fee structures across the nation. This would at least save us from the trouble of running pillar to post inside and outside the RTO and wasting our time.

Some states have reportedly introduced a scheme “Jansahayak – Citizen Services Delivery System,” why is such a system not introduced in RTOs across the country? We would not mind paying reasonable separate service fees to a government-run organization as long as they provide quality service.

Coming back to my individual case, my licence was due to expire on February 5 2018 and I wanted to have it renewed well in time. With little options and hope left after my visit to the RTO, I returned home after handing over my driving licence and other required documents to the driving school that had originally helped me learn driving as well as with licence endorsement several years ago.

Against a normal fee of Rs 200, I have now ended up paying close to Rs 1000. It’s such a shame that our system is still so opaque that we are unable to complete a process as simple as that of renewing our driving licences without the help of a middleman.

Then again, all said, we still have some faith left in our democracy and hope that sharing and discussing such situations and experience will lead to some concrete action to streamline such processes in the near future.

Did Chennai just lose a golden opportunity to improve its water reserves?

While 96.5 per cent of government buildings in Chennai have facilities to harvest rain water, the outdated structures and methods lead to sub-optimal water saving and storage capacity.

Rural areas and a few other cities have demonstrated the importance of ward committees and areas sabhas, but their absence in Chennai has limited community response to the pandemic.

Six neighbourhoods have been chosen for Phase-1 of the Mega Streets project. But what is it all about? How were the six locations chosen? And what can residents expect?