Step into the lush green campus of the Indian Institute of Technology (IIT) Madras, and students pedaling away on their bicycles is a common sight. The eco-friendly mode of commute within the precincts of the campus received a special boost when the management of IIT Madras initiated a pilot project on bicycle sharing in December 2017.

“For the last 3-4 years, several General Secretaries of the student bodies and Hostel Affairs Secretaries had included ‘cycle-sharing’ in their manifestos but had not been able to implement it. During this term, the Committee for Monitoring General Facilities For Students (CMGFS) jointly took up the initiative and cracked a deal with PEDL by Zoomcar, Torq and Ola,” said Anand TS, a core member of CMGFS and a student of Mechanical Engineering.

Under the present system of bicycle-sharing, all a student has to do is, take his mobile, unlock the cycle using the vendor’s application (or by visiting their website, in case of PEDL) use and park the cycles in the respective slots on ending the trip. The next student who wants a ride from that spot will pick it up using the same process.

15 – 20 designated parking slots around the classroom buildings, labs, hostels and canteens have been identified and allotted for parking on the campus. The levied charge gets automatically detected from the PAYTM account which is to be linked with the student’s account on the cycle provider’s application.

As mentioned earlier, the cycles in use in the initial phase are Torq, PEDL by Zoomcar and Ola. The priority was to identify the best working model or make in terms of security and durability. At the end of the pilot period, the institute plans to focus on that which brings profit to the vendor and can cater to the need of the students as well.

“Post the pilot period, we will be choosing one or two vendors depending on the model that works best in the campus and ramp up the number of cycles,” said Prof Sudarshan P, Associate Professor, Department of Humanities and Social Sciences and Chairman, CMGFS.

Meanwhile, due to the overwhelming response from students, OFO, another private player has been roped in since January. There is a good demand for cycles on campus as managing a personal cycle has become difficult and an initiative like this provides great relief to the students. The campus has around 600 bicycles at present.

“The cycle-sharing system has provided me a lot of convenience and relief, as I do not have to wait for the shuttle service or worry about how to get back to classes after a break. I do not have to worry about where to keep my cycle, how to get it repaired or prevent it from being stolen,” says Sree Teja, a third year Aerospace engineering student.

Talking about Zoomcar’s PEDL cycles, Sreejith Hrishikesh,  VP – Operations, Chennai – Zoomcar points out that most PEDL users pick up cycles from one PEDL station and park it at another for the day. As a result, there are some time periods during the day when these cycles all get accumulated at one station, affecting availability in others. But as the demand is good, the cycles automatically get redistributed. “We have also limited the number of cycles which can be parked at one station at any particular point of time,” says Sreejith.

Torq cycles do not come with the option of keeping it for an entire day, which preempts the cycles from being stacked up in one place for long. The nearest available cycle can be spotted using the GPS feature in the application, which is also used for tracking the cycles from the vendor-end.

The OFO bikes also come with GPS and a unique bicycle identification number. 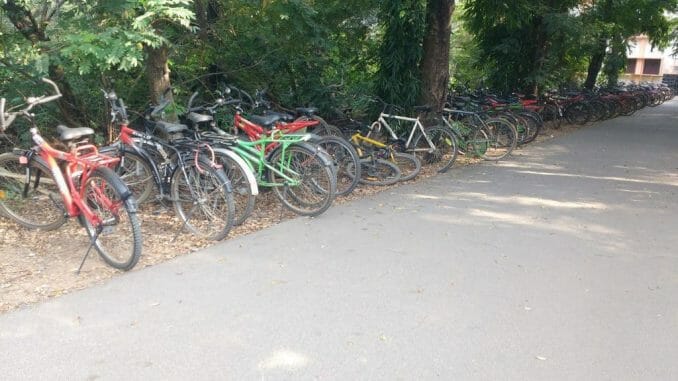 Zoomcar charges Re 1 for half hour, Torq charges Rs 2 for 10 minutes. The fare is paid through PAYTM accounts, which are linked to your accounts on the respective applications.

“During the launch, Torq gave each IIT student 100 points for using the cycles. The levied price was Rs 2 for 10 minutes, so two points would be decreased for every half hour we use the cycles.” explained one student.

During the pilot period, till the end of February, OFO bikes are being operated free of cost.

Torq cycles can be unlocked by scanning the QR code on the mobile applications which get locked as the trip ends. For PEDL, this is done through the website. The additional security features of PEDL include real-time GPS tracking, solar battery charging, and built-in alarms.

Ola cycles can be unlocked using the number locks provided by them. The OFO cycle lock works manually where the cycle number has to be entered on the application and the generated code has to be manually set by the student who takes the cycle.

Talking about the security and confronting mechanism for OFO cycles, Anand added, “Though the lock codes of OFO are static, the ground crew makes sure that they change the codes every 3 days. But for Ola, since the number generated for a cycle was not changed and could be used by anyone who came to know it, the cycles were more vulnerable to misuse.”

This was corroborated by another student Nihal K, a core member, CMGFS and Civil Engineering student. “The Ola bicycles had a static lock code which was taken for granted and was being misused by the students during the inter-IIT sports meet. The lock code does not get updated on the application even after a student has ended his ride. Therefore, students stopped paying for the cycles once they already knew the lock code. Due to this, Ola cycles were made to withdraw the 400 cycles and asked to change their working model,” said Nihal.

There have been occasional complaints of students pulling off the seats, changing the color, removing the stands or causing damage to the cycles in the absence of monitoring.

“Torq cycles is a students’ start-up funded by some alumni of IIT-M. Owing to lack of funds and resources, the care and maintenance needs are not always met. But our team does keep a tab with a view to preventing damages,” said Harisanker Pradeep, Founder of Torq Cycles.

OFO cycles have a ground crew on campus who keep an eye to prevent misuse and also mend the cycles immediately in case of damages. Servicing of PEDL cycles has to be requested through the Zoomcar website.

It is evident from conversations on campus that the cycles are being misused on certain occasions.

In the vast campus that IIT-M has, there were also reports of a few cycles getting stacked in the residential areas. In addition to that, the children of some of the schools located in the institute premises also try to tamper with the locks and use them sometimes.

To curtail the exploitation of the resource, the IIT management plans to bring effective mechanisms. “Since we have received reports of the cycles being misused, we have requested the vendors to narrow down the range of parking. The primary focus would be academic buildings and hostels. If a designated parking space is allotted, he will be charged until he parks the cycles in the recognized spots. This way, the vendor also stands to benefit,” explained Professor Sudarshan.

Following the feasibility study conducted by the Institute for Transportation and Development Policy (ITDP) in 2014, the Greater Chennai Corporation (GCC) has been trying to implement a cycle sharing project in the city. The objective of the project is to provide last mile connectivity for city residents. It was also reported that Phase 1 of the project will take off in Teynampet and Kodambakkam zones with 5000 cycles.

The IIT Madras pilot thus provides an interesting insight into how an effective cycle-sharing system may be implemented and the necessary safeguards to be adopted to avert misuse and breakdown of the system. At a pan-city level, the complications are likely to be that much more and a close study of this smaller pilot may hold important lessons for those implementing the project.

With door-to-door collection suspended in the wake of the COVID-19 pandemic, source segregation has taken a hit. Making matters worse is the indiscriminate disposal of masks, gloves and plastic sanitiser bottles.

Sithalapakkam: The journey from idyllic suburb to garbage dump

Unplanned development, ineffective waste management practices and severe cash crunch of the local body — all of this has led to a major garbage crisis in this southern suburb.

Can Chennai ever become a bin-less city?

Issues with source segregation and waste management must be addressed in order to realise the idea of a bin-less Chennai.