It has been a year since Dr D Karthikeyan took charge as the Commissioner of Greater Chennai Corporation. Within a few months of him taking charge as the commissioner, he was accorded the additional responsibility of holding the Special Officer’s post in the absence of a council which ended its term last October.

GCC is not new to Karthikeyan. It is for the third time that he is serving as the Commissioner of the Greater Chennai Corporation. In a quick chat with Citizen Matters, the Corporation Commissioner speaks about some of the significant issues bothering the city. 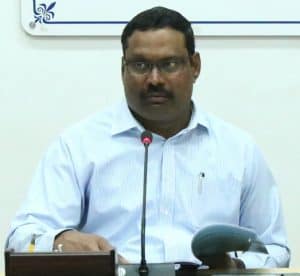 Excerpts from the conversation:

It has been 6 years since some areas along the OMR IT Corridor were brought under GCC limits, but the residents continue to complain about lack of water, sewage and stormwater drain network. What are the challenges of provision here and what is the status of the water/sewerage and SWD network project now?

I was Commissioner of Chennai City Corporation during the expansion in 2011. Providing amenities and infrastructure in expanded areas can not happen easily; it takes time. As far as streetlights and roads are concerned, they have been designed and laid/installed as per the city standards. I am sure if you ask residents of OMR about the quality of streetlights and roads, they are definitely happy about it. Providing those facilities was easy, but building storm water drains, sewer and water connection is a long process.

Talking about the SWD in expanded areas, they come under Kovalam basin (Kovalam includes 15 lakes, Kovalam estuary and Pallikarnai marsh). We are trying to get funding from KfW (German Development Bank) and lay the SWD network at an estimated cost of Rs 1,200  crore. Let alone OMR, even some of the areas in the core city lack proper storm water drains. SWD network in the core city is being laid out at a cost of Rs 1,000 crore with World Bank funding.

There were news reports that the city may be further expanded. Is that true?

No. Not at all. There will be no further expansion. The entire area that comes under the GCC is already huge. However, suburbs like Tambaram, Avadi may be upgraded as municipal corporations.

Do you think the 42 wards that were added to the GCC in 2012 have been adequately taken care of? What have been the challenges in providing infrastructure in those areas?

Yes, certainly. If you go to North Madras, you will see it for yourself. Those places were tiny village panchayats which were not in a position to handle the responsibility of providing infrastructure in tune with fast-paced growth and urbanisation. But after the merger with GCC, they have been provided with high quality bitumen roads and LED lights. Solid waste management in those areas has improved remarkably as well.

On that note, while various pockets are doing effective SWM, will waste segregation be implemented in the rest of the city?

Primary collection is taking place, but we need to impress the importance of source segregation upon citizens. We will soon have two processing plants: one at Kodungaiyur and another at Perungudi.

Will they handle segregated waste or mixed waste?

Is there a plan to put out that message (regarding the importance of waste segregation) among residents?

Of course, we already do that. You visit Manali in North Madras and see the kind of waste segregation that they do. Manure produced in Manali is sold like a hot cake. We would want other parts of our city to follow suit.

In May 2017, the Corporation had ordered the officials to ensure that at least 17 percent of the waste in each zone should be mandatorily segregated by June 30. Has the order been followed? Have you achieved 17 percent segregation?

It has not been implemented yet in a strict sense, but an attempt is being made to implement it.

GCC’s waste management contract too will come to an end in 2018. What plans ahead?

It is a huge challenge. Often we think privatisation is a remedy for everything, but in reality it is not so. There was a lot of hope when the contract system was introduced five years ago, but what we see now is that the waste management system has been completely messed up.

The city corporation too is not able to go behind the contractor in full swing, mainly because we are not in a position to handle the city’s waste on our own. So we are doing our maximum by imposing penalty after penalty on the contractor and making him budge.

What will happen when the contract term ends?

We will have a new concessionaire, but the new contract system will be different. It will see a shift in the payment approach from tonnage basis to service delivery basis. In the existing contract system, the contractor is only concerned about the quantity of waste collected because of the tipping fee which is purely based on the amount of waste collected and carried. The new system based on service delivery will consider factors such as street sweeping, keeping the bins clean etc into account. The contractor will not be paid unless he does he does his job efficiently.

Lastly, how challenging has it been for you as the head of the city corporation over the last nine months?

Since I am also the administrator now, it has not been so difficult to manage. For me it hardly makes a difference. I think you should ask the citizens if they see any difference in the administration now as compared to that before my time.

About Gnana Bharaty 11 Articles
Akshatha M was a Staff Journalist at Citizen Matters. She tweets at @akshata1.

Meet the men who satisfy your midnight hunger pangs

Introducing our new series, “While the city sleeps”, where we talk to people who keep Chennai’s night life and economy rolling, and bring you snapshots of their nocturnal lives.

Civic bodies are on a spree to set up incineration plants to dispose of non-recyclable waste. Chennai’s first, operational for eight months, hasn’t been a positive experience though.

Public consultations in Chennai for various development projects have been marred by lack of information and deliberate hurdles to participation.