In 2017, Tamil Nadu witnessed an alarming oubreak of Dengue, with a total of 6,546 cases recorded in Chennai alone. The high numbers prompted the state health department and the Greater Chennai Corporation to take proactive measures in handling the menace.

According to data provided by the health department of the Greater Chennai Corporation (GCC), the city has been witnessing a declining trend in Dengue fever cases this year: a total of 196 cases were registered in August 2019, as against 213 cases in August 2018 and 1104 cases in the same month in 2017.

Validating the data, medical superintendent of Stanley Medical College and Hospital, Dr K Dhanasekaram also said that the hospital has seen a fewer number of emergency cases this year. “Two to three years ago, we had critical cases — patients were brought in, in gasping condition and with dismally low blood platelet count. We are now getting an average of five cases every day, the lowest in three years,” Dr Dhanasekaram said.

The road to improvement

Greater Chennai Corporation has taken systematic steps to keep Dengue fever at bay. “From creating awareness about Aedes Aegypti (the mosquito that spreads Dengue fever) to constant monitoring of the localities, the Corporation has taken all necessary measures to prevent the outbreak.  Around 70 crores** is spent annually for Dengue prevention and control,” said Additional City Health Officer Jagadeesan.

Every ward is being inspected by a team comprised of Sanitary Officers, Domestic Breeding Checkers (DBC), field supervisors and contract labourers. DBC workers and ground level employees are in-charge of clearing the potential mosquito breeding spots.

However, coverage is not always complete. “I spread bleaching powder around the houses, mostly in the gardens, and pour Mosquito larvicidal oil in the open spaces. However, there are a few houses where the people don’t want us to, so I skip the exercise,” said Joshua C (name changed), a DBC worker.

The Corporation is also mapping dengue cases across the city to identify the hotspots. GCC’s field officers collect adult Aedes mosquitoes (they rest in dark and cool spaces) and send thee for viral analysis. If they test positive for the Dengue virus, preventive measures are boosted.

On the other hand, Corporation has also been resorting to traditional methods such as fogging to stop the mosquito population. A total of 236 hand operated fogging machines and 39 vehicle mounted fogging machines are used to kill the mosquitoes. However, environmentalists and health officials say that the procedure is futile, as the practice cannot kill the Dengue mosquito that breeds in closed spaces. Moreover, the chemicals used such as pyrethroid or malathion is known to be hazardous to public health. 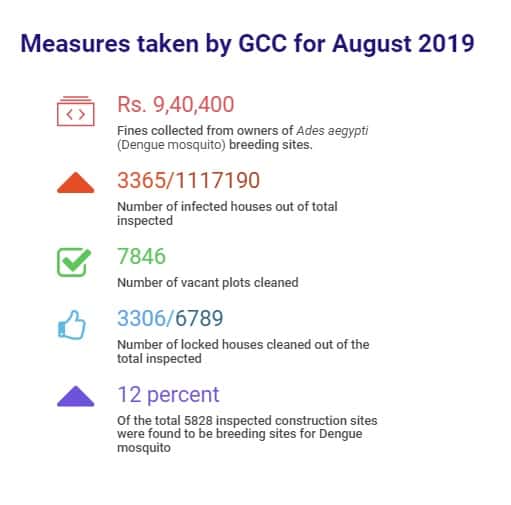 Dengue prevention should be a collaborative effort, say health experts. A majority of citizens are at fault for the ill maintenance of their surroundings.

It is also ironical that citizens often do not let the DBC workers inside the houses, only because they are Dalits. “Even the most educated people have stopped us from doing our job. At the same time, they fail to keep it clean themselves,” said another worker, seeking anonymity.

A total of 3365 houses in the city were identified as active Dengue clusters last month. “Buckets, plastic cups and coconut shells are seen in the premises of the residences — both small and big. Rain water collected in these articles provide for a conducive environment for the Aedes Aegypti to thrive,” said Jagadeesan.

What should we do?

It is important to keep the following things in mind if we really want to beat the dreaded disease:

(Pics and Graph by Laasya Shekhar)

** Errata: The figure cited in the first published version has been edited.

A useful compiler for residents of Zone 8, comprised of areas such as Anna Nagar and Shenoy Nagar as they get set to vote on February 19th.

A translation of our earlier article that tells you how you can get your grievances addressed under the existing consumer law in the country.

There is uncertainty about the construction of a women’s entrepreneur zone at Red hills reservoir. However the primary questions remain unanswered: Why are the officials not speaking up? Why should Chennaites worry about the development?