A strong stench of seafood fills the air at Ayindhu Gudisai Street in Chintadripet, which is a stone’s throw away from the banks of the Cooum river. As the sun descends slowly on a Friday evening, a group of lungi-clad men aimlessly banter about their day-to-day chores, while the women sip on their tea and play Daya kattam. Overpowering the Tamil song played from one of the MGR movies on the narrow street, the verses of Bharatiyar resonate through the entire locality.

With a wide smile and excitement writ large on their faces, children repeat the verses after their teachers, whom they fondly address as ‘akka’ and ‘anna’ in a makeshift study centre here. The study centre organized by students of social work at the Madras School of Social Work (MSSW) in collaboration with the Central Organisation of Tamil Nadu Electricity Employees aims at holistic development of over 40 children from this economically deprived locality.

The set-up is a welcome change for the children, who otherwise spend their evenings in cramped huts, often witness to alcoholism and domestic violence. Recalling her experiences, Sarita (name changed), an 11-year-old girl from the study centre said, “Most of the days, my dad would come home drunk and pick up a quarrel with my mother. I would sit out amidst a swarm of mosquitoes and try hard to concentrate on my studies. But the shouts of similar alcoholic men in the neighbourhood was a disturbance.”

The study centre has not just pulled many children like Sarita away from the violence and abuse, but also brightened their lives by conducting art therapy and helping them with their academic work.

For Anandhi, a student of Class VII in a Tamil medium government school, the study centre is an escape from household chores. “Most of my time in the evenings was spent on doing the dishes and washing clothes. I have learned a good amount of English after joining the centre,” she said confidently, though in broken English.

A student initiative with a difference

Ayindhu Gudisai street and the surrounding localities by the Cooum River, in interior Chintadripet, is populated by fishermen, domestic workers, and manual scavengers. Their houses are nothing but one-room structures, where a little space is allocated for cooking, studying and sleeping. There is a general lack of concern for the children among the parents, primarily due to ignorance. 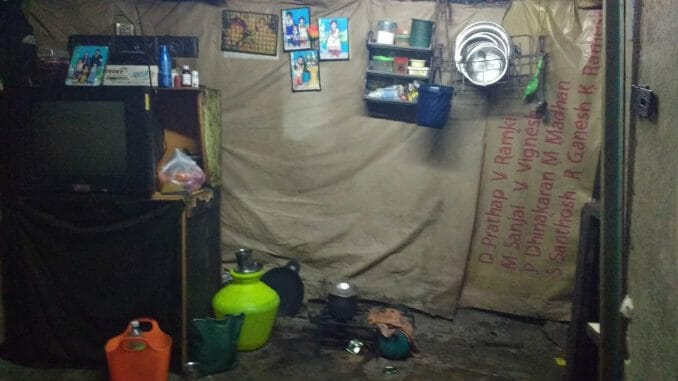 A typical house in the slums of Chintadripet. Pic: Bhavani Prabhakar

The students swung into action here in a carefully planned and systematic way. They started with house visits and counseling parents on the importance of sending their children to a centre such as this. As they got to know more about the community, they were shocked to find that only five students among the 140 who had completed high school had enrolled into graduation last year.

“The dropout ratio is alarmingly high here. Fearing English, most of them did not pursue higher studies and are now working in the Vaanagaram fish market,” said B Aswin.

The students convinced the Central Organisation of Tamil Nadu Electricity Employees to allow their vacant building to be used to establish a centre. “Except for occasional meetings, the employees do not use the building. Our principal, Dr. S Raja Samuel and Assistant Professor and Controller of Examination, Dr. K Sathyamurthi helped us to acquire the building for use in the evenings,” said Anil Thomas, another student.

Social work students currently take shifts to man the study centre, which functions five days a week. To maintain regular discipline, they take attendance and follow up personally on those who skip classes.

“We started the initiative in August 2017 and it took three months to stabilize it. The whole idea is to ensure a happy and productive childhood and to prevent them from becoming alcoholics, like their fathers,” said A Enoch, Assistant Professor, MSSW, who mooted the idea among the students.

Aspiring parents are grateful to the students for uplifting the lives of their children. One of the parents, S Aasha said, “My two sons are studying at the centre. Since I am illiterate, I cannot help them out academically. There has been a drastic change in their behaviour as they playfully converse in English and happily talk about the programmes from the centre.”

Social work students are currently looking for funds to provide a nutritional snack to these children during the tuitions. Anyone willing to contribute can contact Professor Enoch at +91 91762 69347.

Of bullock carts, wells, fountains and reservoirs: Water supply in Chennai through the centuries

“The entire history of Madras can be summed up as a perpetual groping for water” says historian V Sriram, as he provides a glimpse into Chennai’s history of water (mis)management.

Whenever the city faces water shortage, people go testing for more borewells. Yet, the traditional technique of drawing water from open wells remains a much more viable and sustainable option.

Behavioural change among citizens can be a game-changer: Bicycle Mayor Felix John

Felix John, an avid cyclist who has pedalled long distances, has been appointed the Bicycle Mayor for Chennai by an Amsterdam- based organisation. In this interview, he talks about his responsibilities and how to give a boost to cycling in the city.