This election season, Citizen Matters Chennai conducted a survey to analyse the state of the affairs in various neighborhoods of Greater Chennai Corporation (GCC),  which has thrown light on some interesting facts about the residents’ perception of local governance.

The survey conducted by AskByPoll for Citizen Matters, was to understand the view of Chennaiites on public policy, local body representatives, quality of local governance, performance of MLAs, and important civic issues.

Over 100 respondents from different parts of Chennai took part in the survey, out of which 15 percent were from the  extended areas  of the GCC. Around 68 percent of the participants were males and 31 percent females  in the survey conducted using an online questionnaire posted on our website.

Shockingly, over 52 percent of the respondents did not know who their MLAs are, while  around 82 percent had no idea about their Municipal councillor!

Maintenance of roads, foot paths, and drains (14.7 %) is the most important factor according to the participants. Garbage and sewage disposal/cleanliness (13.5%) ranks  second among the ‘neighbourhood factors’, while urban planning  which includes building/zoning regulations, encroachments etc. (13.2%) is the third key factor. 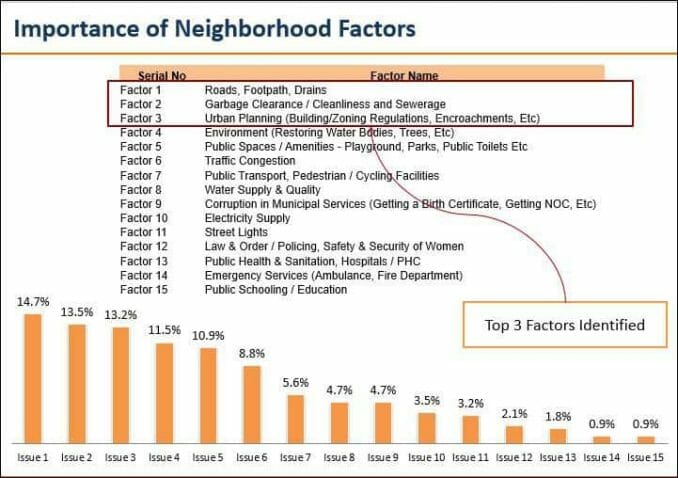 However, when asked to rate the performance of their local bodies in addressing civic issues, electricity supply received the highest ranking of 3.23 on a scale of five, while law and order/ safety and security of women received 3.12. Emergency services (ambulance services, Fire Department) which  ranks 3.10 and street lights (3.04) show better performance when compared to  public schooling (2.91), public health and sanitation (2.74), and water supply and quality (2.71),

The GCC’s  performance is poor in environmental conservation, waste management, and cleanliness, the survey says. Environment has the lowest ranking of 2.16, whereas  garbage and sewage disposal, and cleanliness is rated at 2. 19. At the same time, corruption in municipal services ( issuing birth certificate, NOC, etc.) is given the rating of 2.48.

Government offices seem to be inaccessible to  majority (53.7%) of the residents of the city. Around  40 percent of the participants says that the ease of interaction  is ‘average’, around 30 says it is  ‘poor’;  whereas  over 23 percent thinks that it is extremely difficult to interact with government officials.  A minority of 4.3 percent respondents feel that the ease of interaction is ‘good’. Over 38 percent rates  the accessibility of officials as ‘average’, 31.2 percent as ‘poor’, while 24.7 percent says it is ‘very poor’. At the same time, over five percent feels it is good.

As per the self-perception of the participants, 52.7 percent are  active citizens while around 47.3 percent says they are not active.

The MLAs and corporators could perhaps take a lesson out of the citizens’ responses,  and find more time to interact with the citizens they represent which would help understand their demands and needs. The results suggest that the government should also take steps to make government offices more accessible and free of corruption.  At the same time, the survey suggests that Chennai needs more active citizens to interact with local representatives and raise issues in their neighborhoods.

How COVID landed the MSME sector in Chennai in deep waters

From reverse migration of workers to the oxygen crisis, this is how various factors came together to cripple small and medium businesses and livelihoods in the sector.

What Chennaiites expect from their new MLAs?

Even as the AIADMK government assumed office with a historic second consecutive victory in the Assembly Elections, DMK swept Chennai, by winning 10 out of 16 seats. Another factor was anti-incumbency – except for Dr.

Newspaper distributors in Chennai fight COVID blues without any support

Newspaper distributors play a crucial role in the print media industry. Yet they have been left out of all welfare and COVID compensation schemes.