The locality of Chintadripet in Chennai is known for its popular fish market and also as a hub of electrical goods. With the river Cooum forming a horse-shoe shaped boundary to this locality and with only two entry points from Egmore and Anna Salai, this tiny neighbourhood is a storehouse of history. An early morning walk conducted by Madras Inherited — an initiative of a group of architects and researchers seeking to unravel hidden architectural gems through heritage walks — unveiled the treasures of this forgotten neighbourhood in Chennai.

Chintadripet was originally called ‘Chinna tari pettai,’ which translates to ‘a village of small looms,’ the latter being what it was known for decades ago. This weaver’s village had large agricultural fields before the transformation of the place. In the 1730s,  the East India Company sought the help of a sect of people called Dubashes, who were basically the interpreters for the East India Company, to revive the slump-hit cloth trade. With their help and of a few others, the Company started developing this area and building infrastructure to help trade flourish. Chintadripet was one of the few localities in those days where streets were not demarcated on the basis of caste. 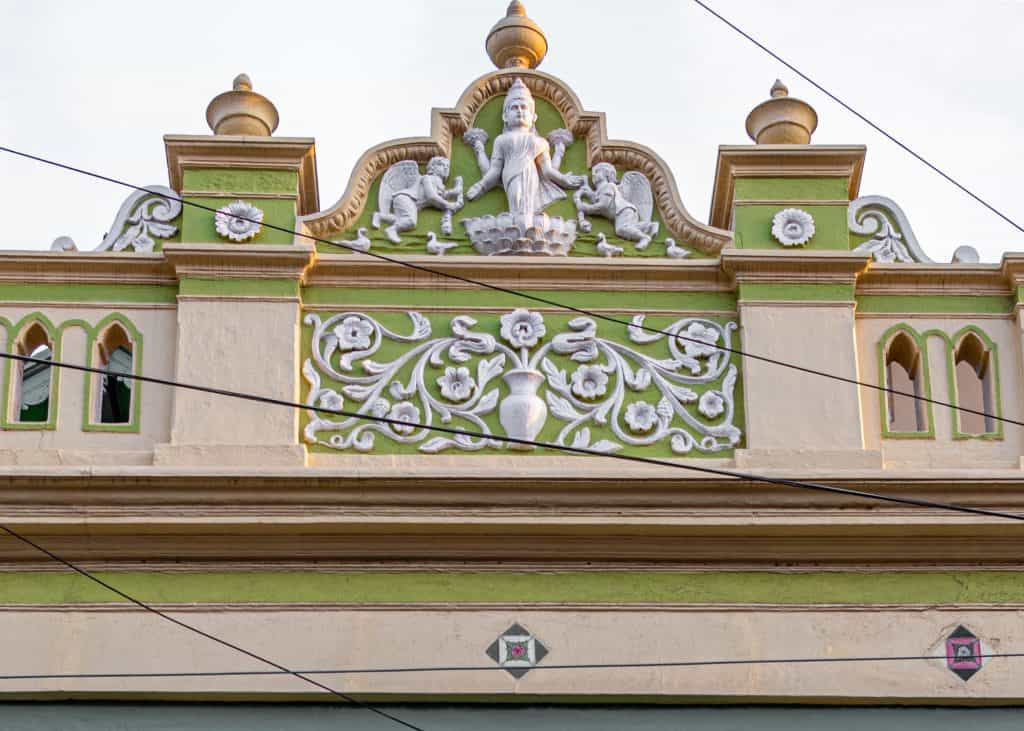 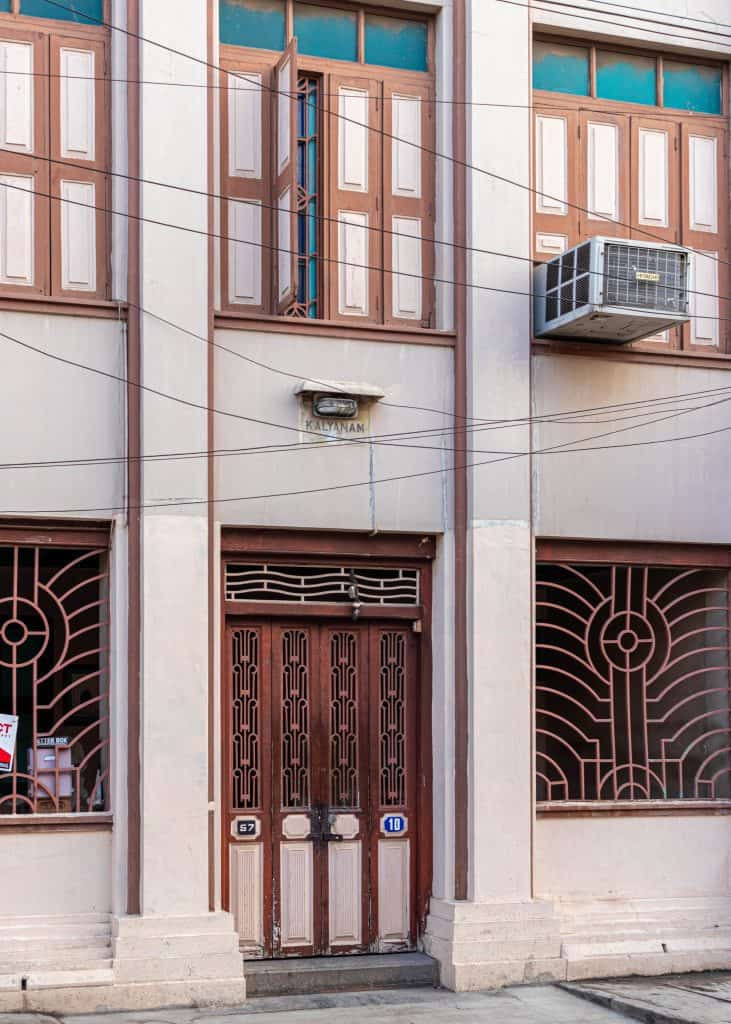 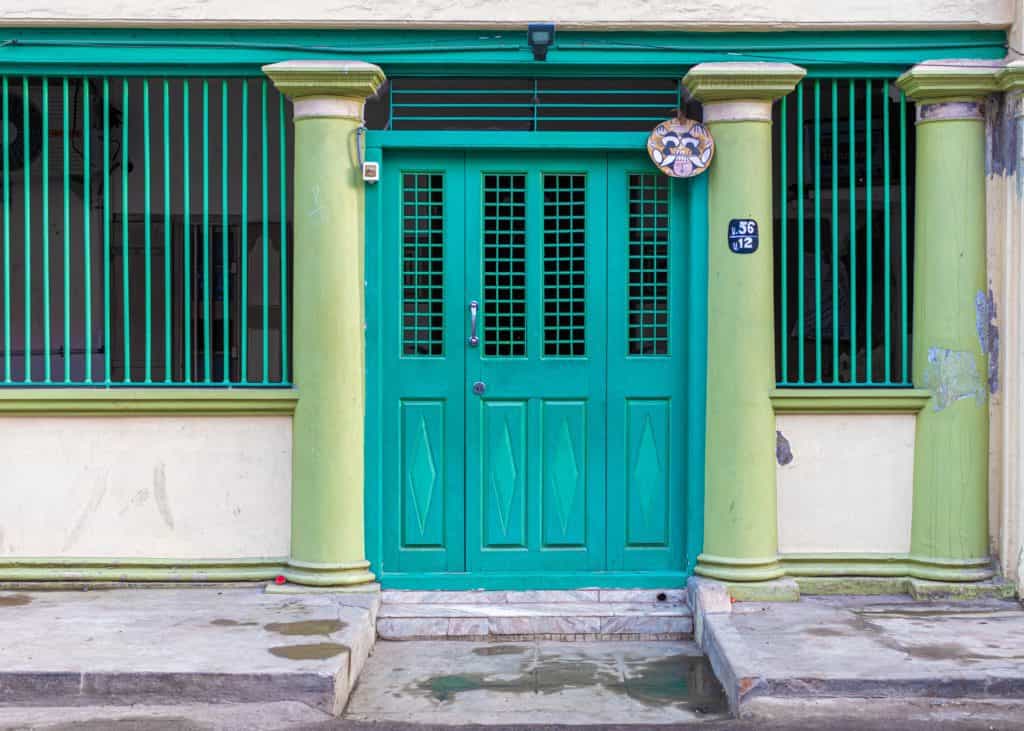 The entrance of houses have a veranda and a dwarf wall. The grills are modern additions to these houses, probably for safety and privacy. Pic: Mahesh V

Chintadripet used to have many row houses back then. The walls of every house were connected to each other. These houses were reminiscent of the French Art Decor style of construction, which followed the pattern of horizontal windows and vertical doors.  Many houses used to have (and some still have) the Gajalakshmi symbol on top that signifies wealth. The houses run deep inside and have two courtyards; one in the front and another at the back. 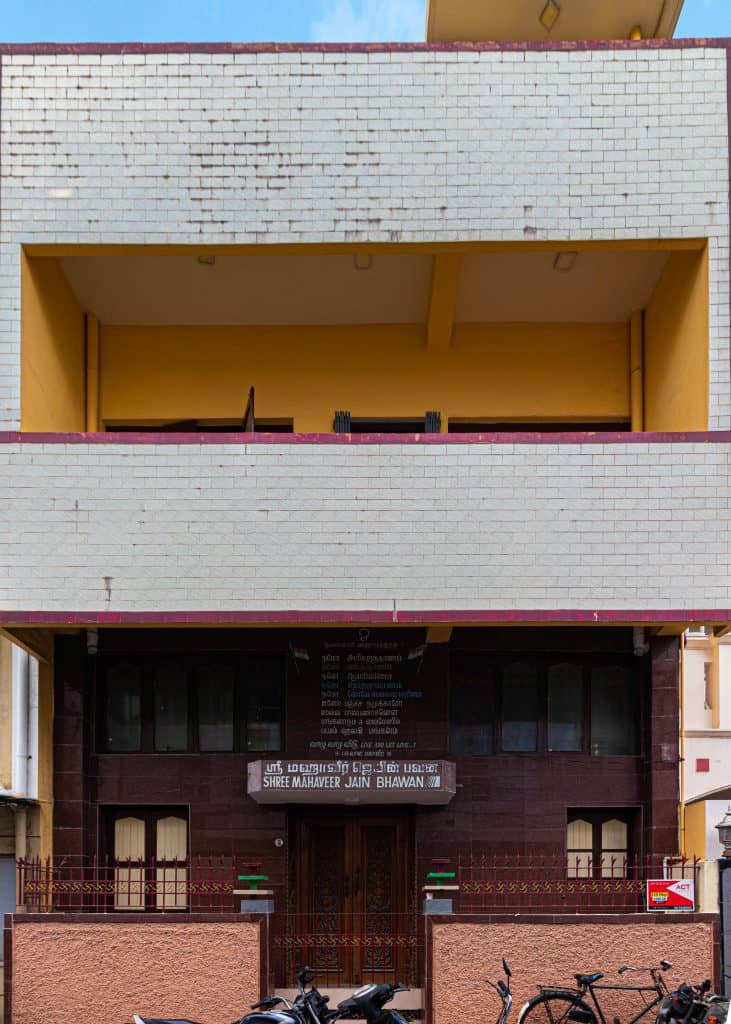 The space in Chintadripet has been organically demarcated between different communities and each of them have built up the space as per their own needs. Within a span of 1 km, we find Jains, Saurashtrians and Christian community members living adjacent to each other. 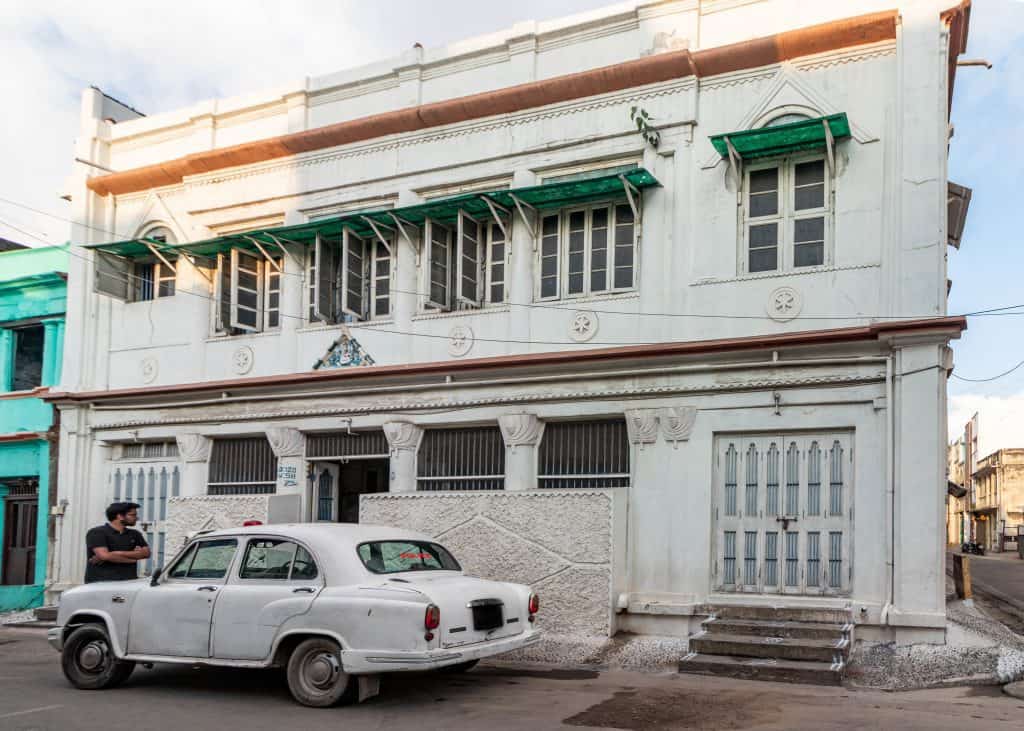 An old British rest house which is now restored as a heritage house by the owner. Notice the Gajalakshmi on the crest. Pic: Mahesh V 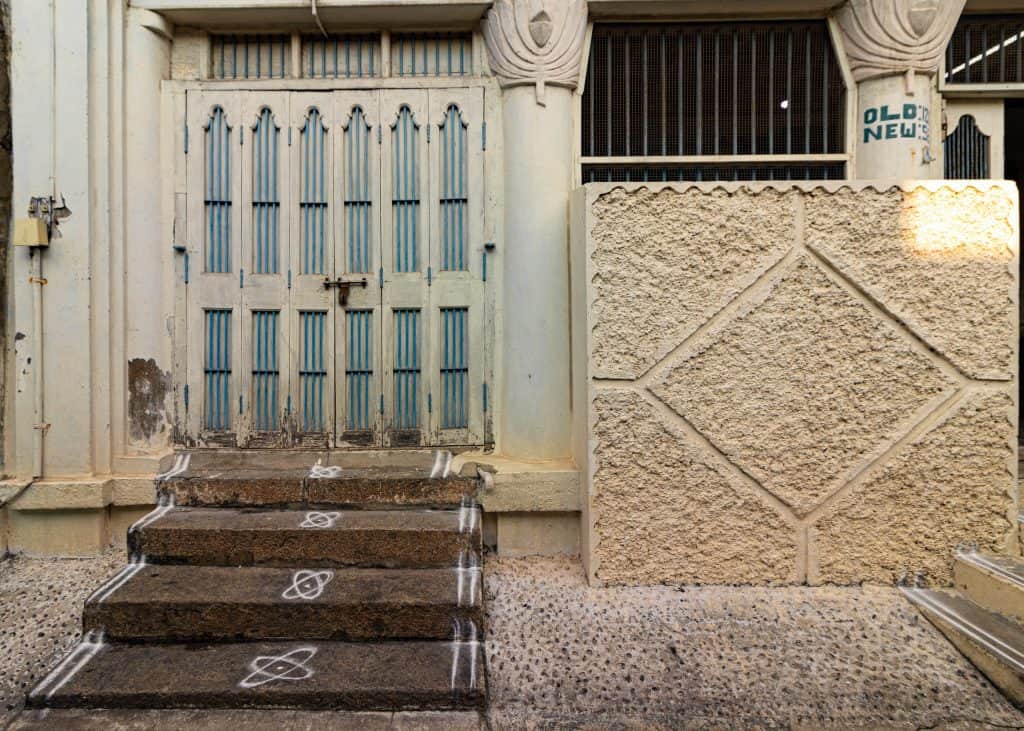 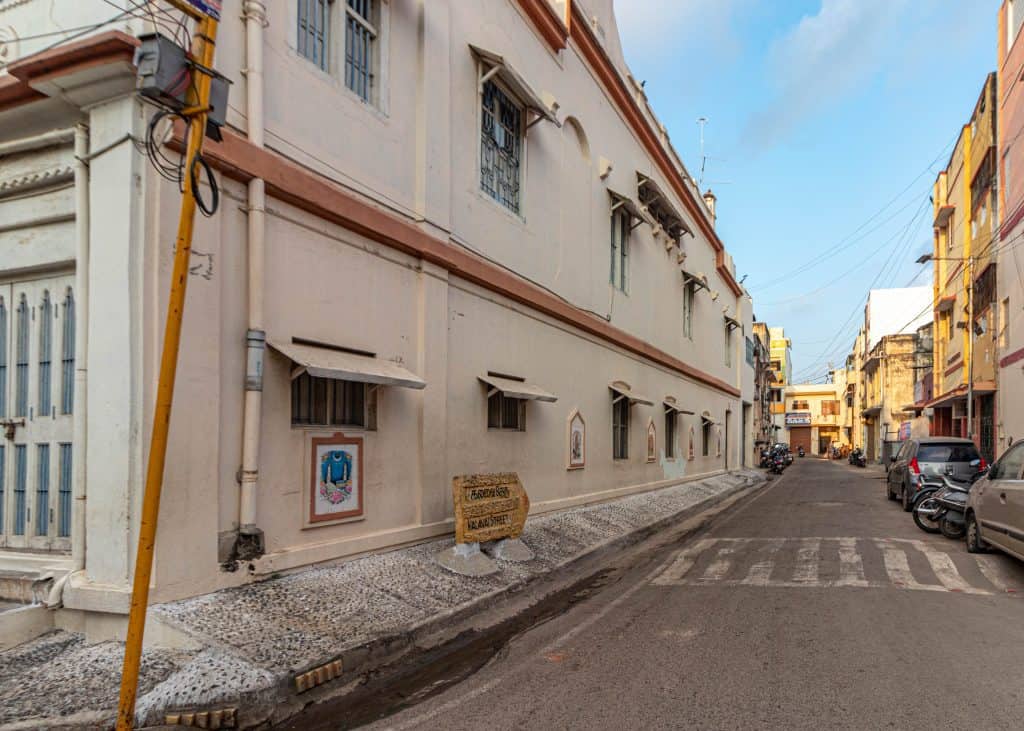 The houses run deep inside. With multiple rooms and courtyards. Pic: Mahesh V 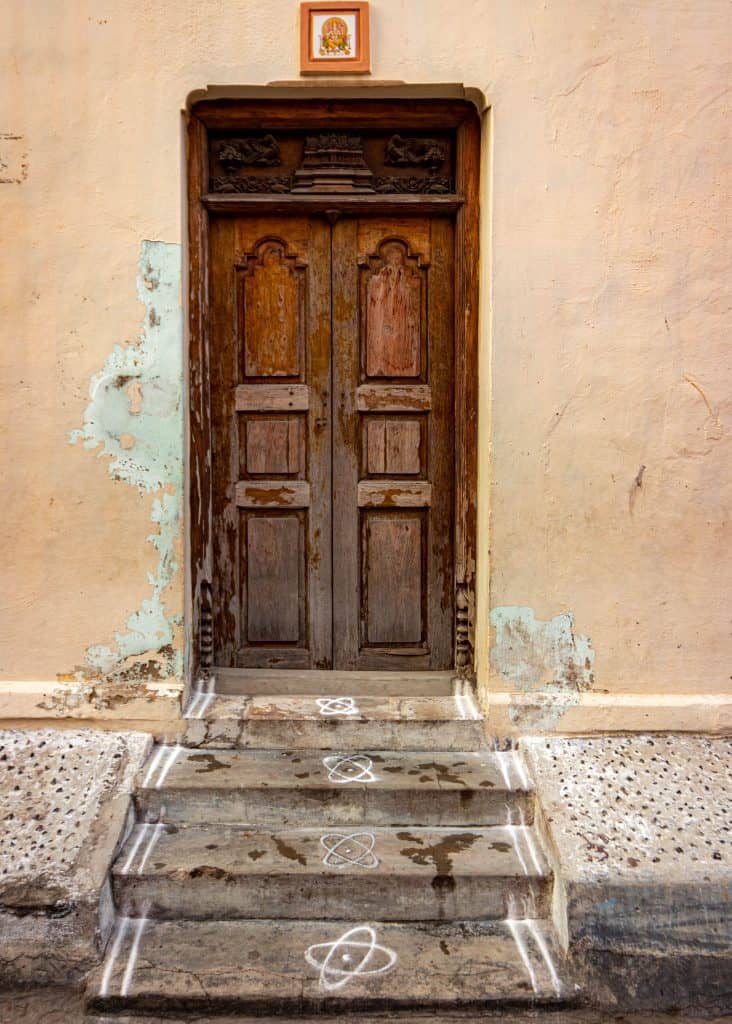 Side entrance to a house which is not being used any more. Pic: Mahesh V

Some of the houses are restored as they had undergone serious damage. The houses have been carefully restored by the owners, keeping in mind the heritage value and retaining the charm. These houses still have the old style of door hinges, flooring, water pumps and even rain water harvesting systems. Many of the roads used to have a tram line running right outside the houses, though there is no evidence of it now. 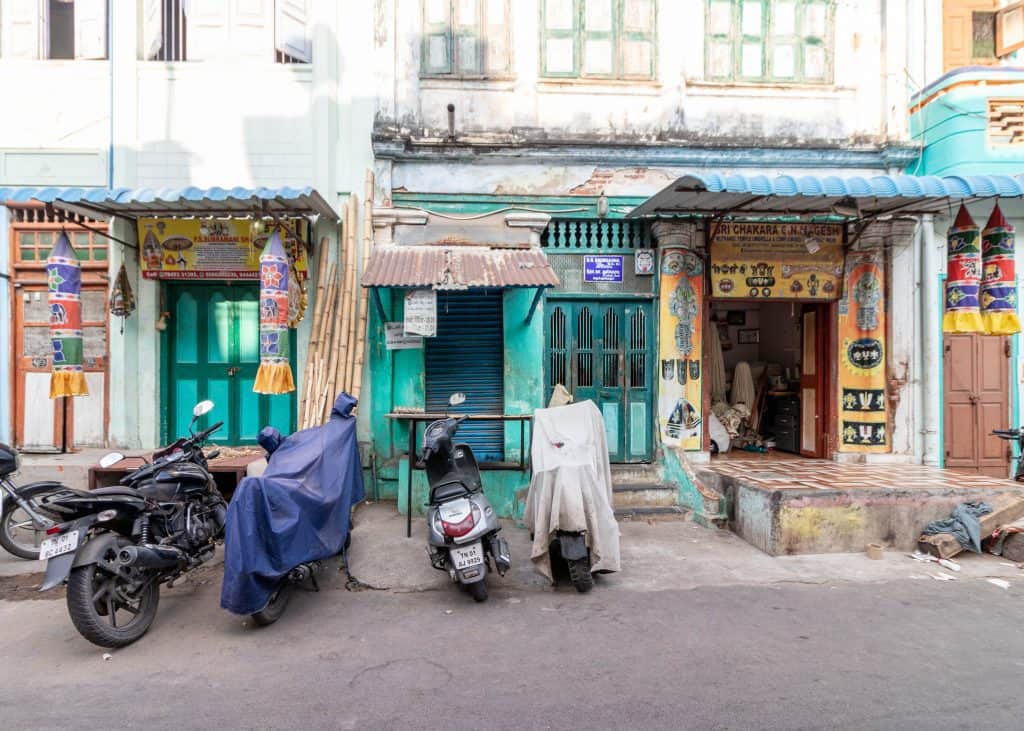 Iyya Mudali Street in Chintadripet is home to temple umbrella makers. This work is executed by the members of the Saurashtrian community. Pic: Mahesh V 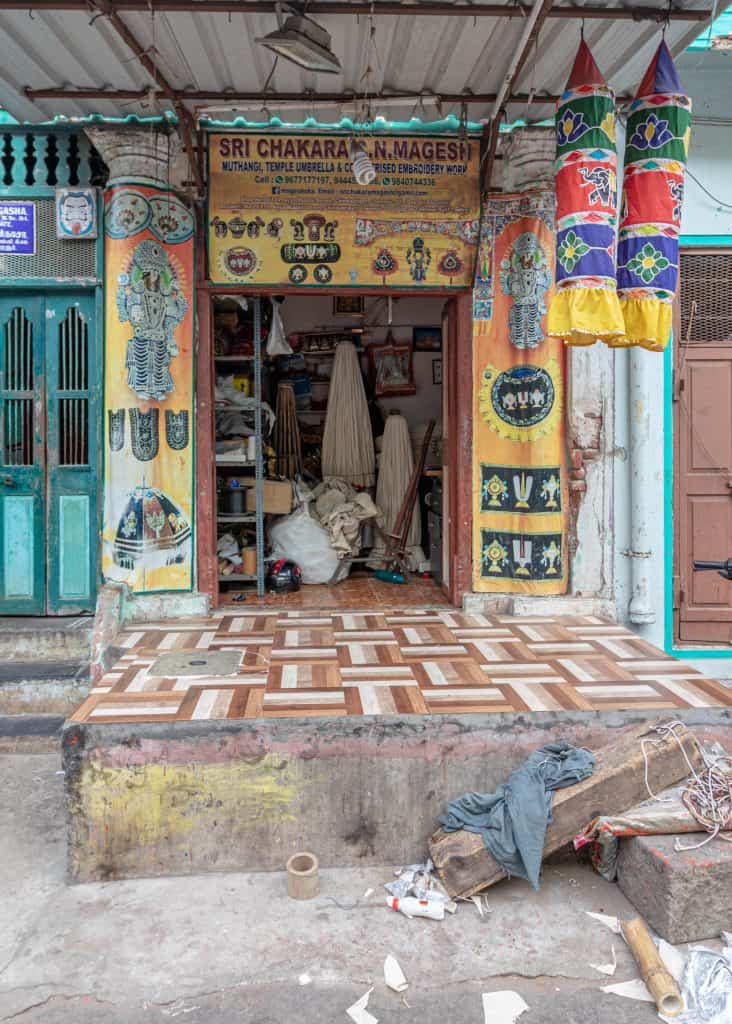 Umbrella making is a family owned business and is passed on from generations. But the trade is on a decline as the future generation is moving on to other professions. Pic: Mahesh V

Iyya Mudali Street in Chintadripet is home to families who make temple umbrellas. The business is run by the Saurashtrian community that came to Chintadripet as weavers. By the beginning of the 19th century, the handloom industry here had started to see signs of decline. The growth of power looms and cheaper dyes in England contributed to the decline of the industry in India. As volumes fell, people from Chintadripet migrated to Kanchipuram, but the Saurashtrian community decided to stay back and got into the business of making temple umbrellas. The exact time of this change is not known. This street is globally renowned for temple umbrella making, and their products are supplied to temples in Malaysia, Singapore and to countries as far as Australia. 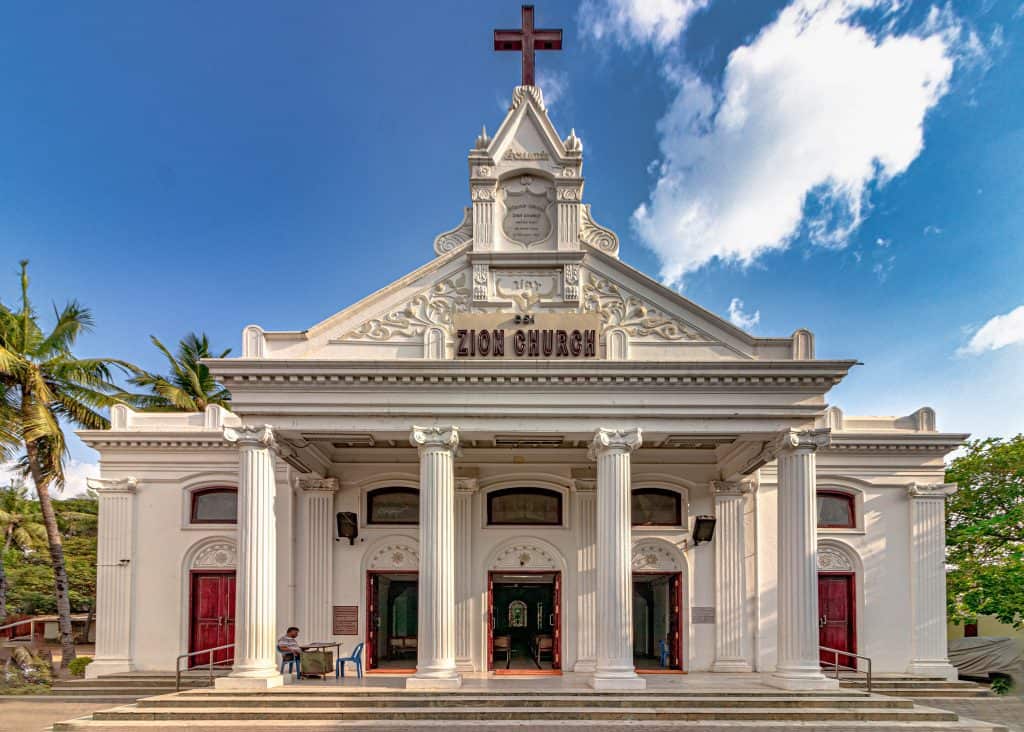 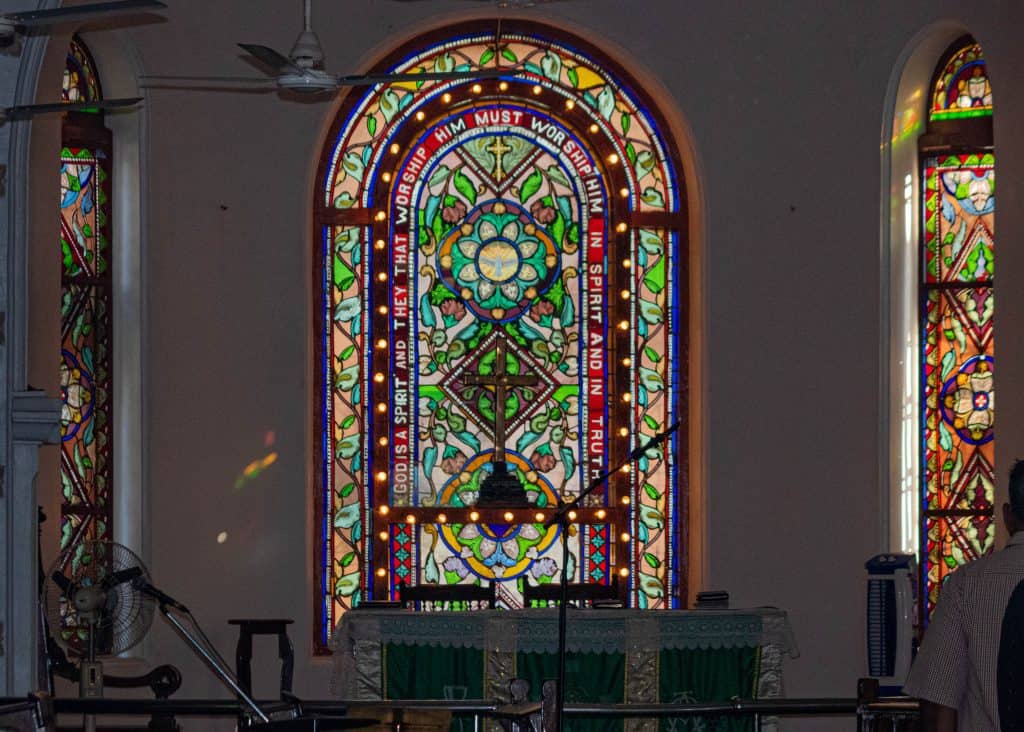 Stained glass in Zion Church. These paintings are of European models that dates back to more than 3000 years. 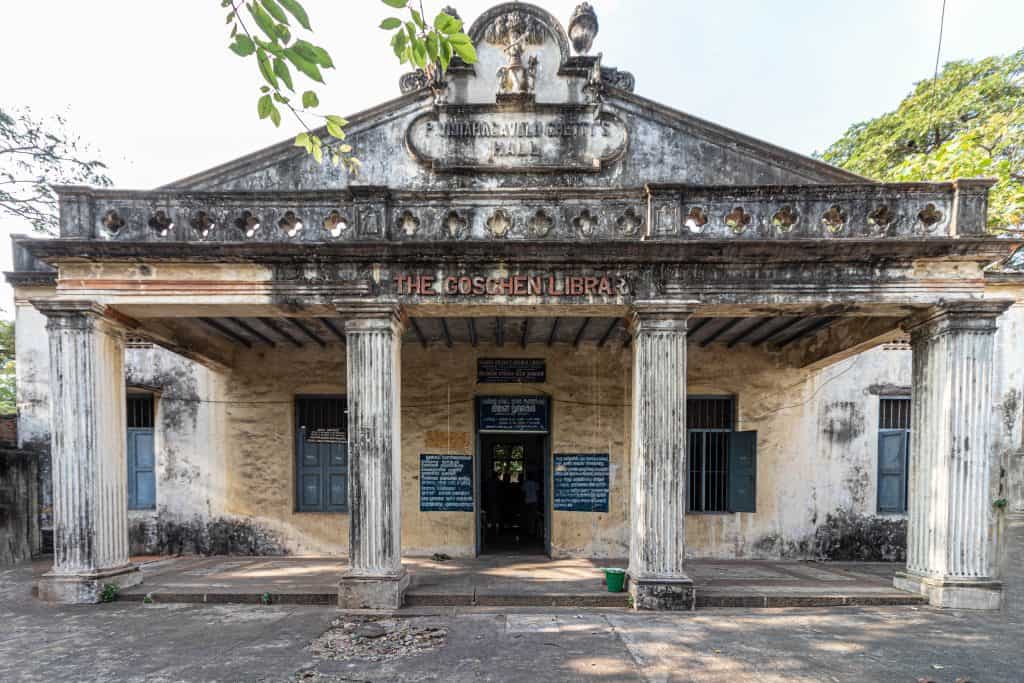 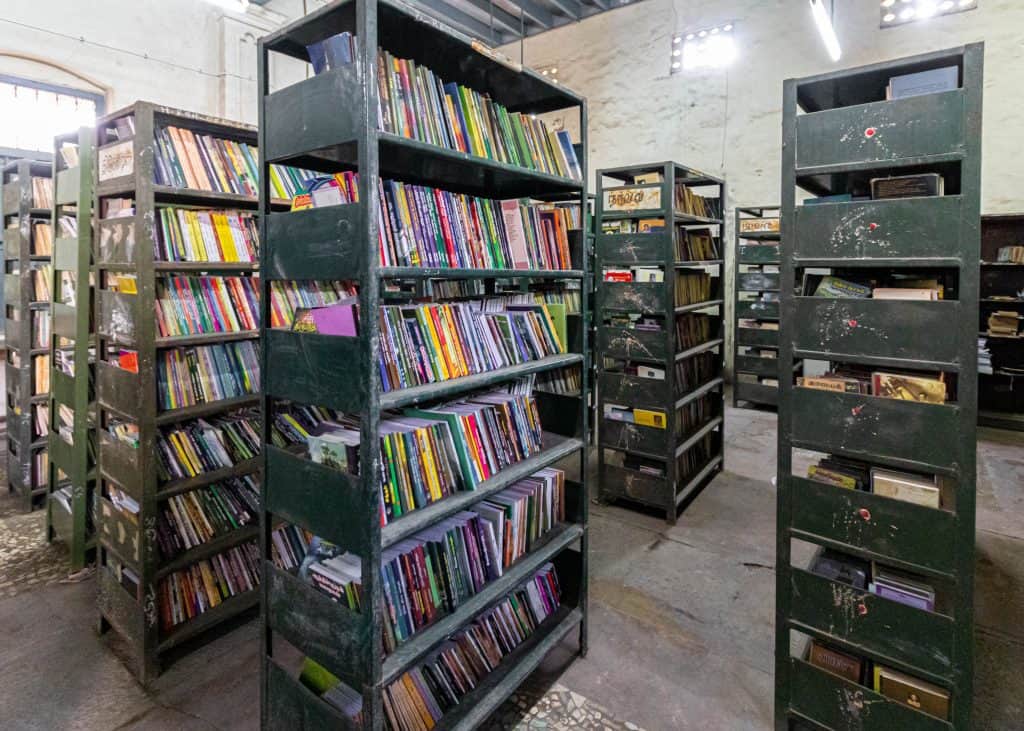 The library has close to 50,000 books in Tamil categorised under science, philosophy and literature. Pic: Mahesh V 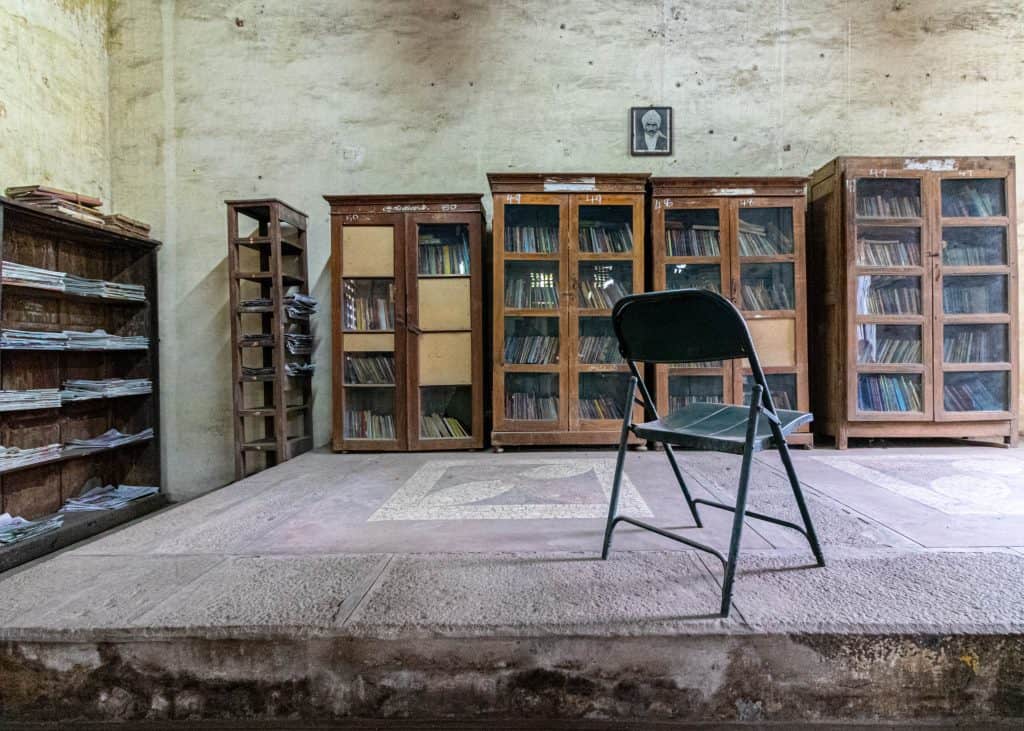 Empty chairs, old bookshelves and rising dust is all one can see inside. Pic: Mahesh V 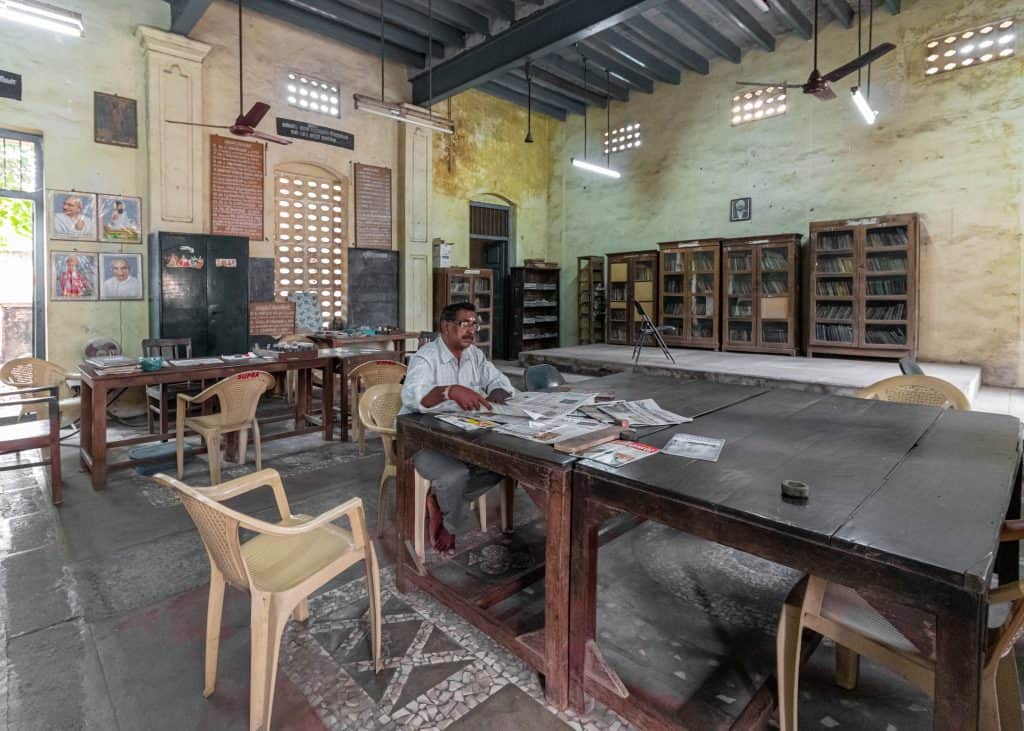 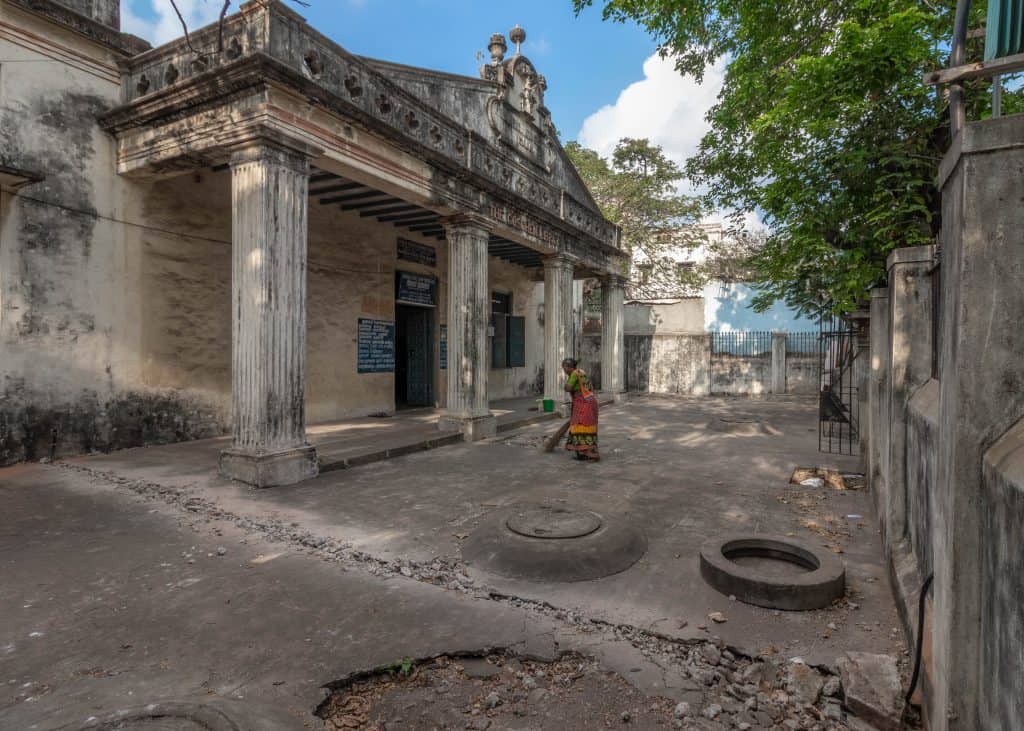 The Goschen Library in Chintadripet is classifed as a heritage structure. Named after Lady Goschen, the wife of George Goschen, then Governor of Madras, the hall had its foundation stone laid in 1926; the library started functioning in 1927.  This library was set up by Vijayaraghavulu Chetty to encourage the local residents to start reading. Now, there’s complete apathy towards this building with lack of facilities clearly visible. The library lost a number of books during the 2015 floods which also impacted the building. Today it is the Chennai District Branch Library, and yet another example of heritage in tatters.

Chennai is home to nearly 150 species of butterflies. What do naturalists infer from that?