As the flood waters started to recede, one of the main issues that the city of Chennai grappled with in the aftermath of the recent floods was the clearing of tonnes of garbage strewn all across the city. Chennai Corporation employees with the help of volunteers cleared 1.32 lakh tonnes of garbage from the streets of Chennai. This was a grimy reminder of the impending crisis of solid waste management (SWM) faced by the residents of Chennai.

According to The Waste-to-Energy Research and Technology Council (WTERT), the city generates 6,404 tonnes of garbage every day with an average per capita of 0.71Kg. This is the highest in the country closely followed by Kolkata (0.66kg), Delhi (0.65Kg), and Hyderabad (0.65Kg) and Bangalore (0.5 kg).

The journey of garbage

The garbage is collected from 200 wards in the 15 zones in the city, both door-to-door and from community bins, which according to the Corporation covers 95% of the households. The process involves collection, transportation, and disposal of solid waste in dump yards situated about 15 km away from the centre of the city.

There are eight transfer centres in the city, where the garbage trucks are unloaded before the garbage is taken to the landfills. The Corporation has two open dump yards – Perungudi (228 acres) in the south and Kodungaiyur (270 acres) in the north. These two dumping yards have been in use for the last 30 years and are reportedly nearing their maximum capacity. Waste management is privatized in three zones, while the Corporation is in charge in the other 12 zones. Unsegregated waste is collected, transported and dumped in the dump yards.

According to studies, 68% of municipal solid waste generated in Chennai is residential waste, 16% commercial waste, 14% institutional waste and 2% industrial waste. Majority of the garbage is green waste (32.3%), and inert materials (34.7%) like stone and glass. These figures speak for themselves: if effective source segregation and recycling methods are followed at individual residential units, the garbage flow to the dump yards will go down drastically. 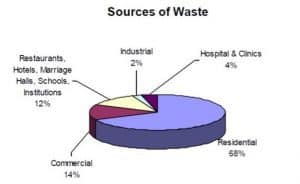 A few studies on the composition of garbage collected, and methods of source segregation and recycling have been undertaken by research institutions, NGOs and activist groups such as National Productivity Council, New Delhi and Citizen consumer and civic Action Group (CAG).

However, corporation officials say that they do not have the facilities for conducting such studies, which are essential to implement effective segregation practices.

However, now that the Central Government has passed the SWM Rules 2016 this month, it is mandatory for local bodies to ensure that the waste is segregated.
Collection and Transport

The Municipal Solid Waste (Management and Handling) Rules, 2000, had directions to implement source segregation in a phased manner by engaging with residents’ associations. In addition, the latest solid waste management rules 2016 have made bulk and institutional  generators,  market  associations,  event  organizers  and  hotels  and  restaurants  directly responsible  for  segregation  and  sorting  the  waste and managing it in partnership with Local Bodies.

The Corporation of Chennai (CoC) had earlier tried the fancy way to promote source-segregation in certain areas by offering gold coins and watches to residents, but in vain.

According to Corporation officials, there are 15,000 sanitary workers employed by the Solid Waste Management (SWM) department, out of which 8,500 are permanent employees. Their job includes sweeping and collecting garbage from the streets and community bins, door-to-door collection, unloading them at transfer stations, and finally disposing them at the dump yards.

Official data suggests that the amount of garbage generated varies across the city; the maximum amount of waste is collected from Teynampet, a busy commercial area, while Manali generates the least amount of garbage.

Sabina Narayan, a member of Harrington Road Residents Association (HRRA), says: “Since the floods, residents of the city are a lot more sensitized on the issue of waste management.” According to Sabina, while litter-bins on streets help reduce waste tossed on the streets, community garbage (open) bins placed on streets end up polluting the area with overflowing garbage or garbage strewn around it.

M Sumithra, a student staying at a paying guest house facility in Purasaravakkam, also said that the streets are kept clean and the garbage is cleared on time, but segregation of waste is not encouraged.“Though food waste at the PG facility is collected separately here, when the sanitary workers come to collect it, everything is dumped together in their vehicles,” she said.

Thousands of people including waste collectors and scrap dealers in the city, who eke out a living by collecting and selling waste materials, are the major contributors in recycling waste materials. Researchers and activists in Chennai have been drawing attention to the importance of incorporation of informal workers into the waste management policies for years.

CAG, which works on city issues, says that integrating informal workers into the solid waste management measures, and effectively organising the network of waste collectors and scrap dealers will help fill the gaps in the current method of collection and disposal followed by the CoC, and can ensure that the recyclables reach the recycling units,

The Corporation had earlier initiated measures in January 2015, to screen and identify waste collectors at the dump yards by issuing ID cards. According to officials, there were plans to give medical assistance and provide gloves and shoes to prevent diseases. But, the whole plan has been called off.

Officials allege that the IDs with the seal of the Corporation were misused by the informal workers.“The IDs issued by Trichy Corporation were misused by the waste collectors recognised under the scheme, as they procured bank loans claiming to be employees of CoC. Some of the ID holders also started claiming benefits of employees,” the official said.

When asked whether their status as informal workers could be mentioned on the ID to prevent such issues, the Corporation officials said that they have cancelled the scheme as the plan was found to be not feasible. “The NGOs working on the issue wanted to monitor the activities of the Corporation which was also not acceptable to us,” the official added.

Many activists and researchers suggest that if implemented effectively, the Solid Waste Management Rules, 2016 will improve source segregation as well as the incorporation of informal workers into the SWM schemes. At the same time, private waste management entreprises like Paperman and Kabadiwala Connect have incorporated waste collectors and scrap dealers into their business initiatives.

According to Corporation officials, the corporation can undertake projects for the reclamation of landfills (expansion of landfill capacity to avoid moving to a new site) and setting up of waste processing facilities only with the funding of private bodies. The corporation cannot fund the entire projects, so the decision is to continue with the public–private partnership model in the three zones currently serviced by Ramky. The corporation also added that they are planning to privatise the conservancy operations in other zones of the CoC.

The city had earlier witnessed a number of protests by activists and residents near the dump yards to relocate the landfills. An online petition to close the dump yards in Chennai, started two years ago, citing that the yards were identified as illegal by the Tamil Nadu Pollution Control Board; the petition has reached 7,826 signatures as of now.

The Corporation had earlier sought private partners for scientifically closing down the existing dump yards and finding new sites to be used as landfills, but due to strong public protests the plan was cancelled. The Pollution Control Board and National Green Tribunal (NGT) did not approve the proposals to set up a bio-methanation plant and waste-to-energy projects at Kodungaiyur, as the projects posed environmental issues and health hazards.

However, the Corporation officials complain that they could not implement waste processing programmes due to lack of public support. Now, they are planning to undertake remediation (reduce environmental damage caused) of the existing landfills and to continue using them.

While the Corporation officials insist that the waste processing facilities would help address the issue of spillover of landfills and the environmental damage caused by them, experts suggest that the collect-transfer-dispose system is no longer tenable.

Chennai City Connect, a platform of industry associations and civic bodies focusing on urban governance, is one of the organisations that partners with the CoC’s ‘Clean Chennai’ campaign which was launched in 2014. Raj Cherubal, Director–Projects, Chennai City Connect, says that the city has come a long way in terms of sensitisation of residents on waste management issues, but more efforts are needed to effectively implement source-segregation and decentralisation of SWM. “Ensuring that the garbage produced in each ward/zone is managed at the zone/ward level itself would help reduce the amount of waste transported to the landfills,” he adds.

Research also shows that the city needs strong policy measures based on zero-waste philosophy which aims at resource recovery and prevention of environmental degradation due to waste disposal methods, and decentralisation of waste management systems with active community participation. Pointing to the SWM policies in cities like Singapore, Daniel Thomas of Chennai City Connect says enforcement is a key factor in successful implementation of SWM policies. “The issue of enforcement needs to be addressed effectively to bridge the gap in implementation of SWM policy,” he adds.

According to the Corporation, it is difficult to pick the most effective models in solid waste treatment and disposal, and there are no success models.  But, researchers point to initiatives in other parts of the country that are worth considering. Daniel says that there are a lot of technological options available, “it is important to plan and set achievable targets and aim towards reducing the garbage flow to the landfills in a phased manner.”

Harsha Anantaraman, a researcher at Citizen Consumer and Civic Action Group, in his analysis (published by Transparent Chennai, 2013) of solid waste management policy and practices in Mumbai, Pune and Bengaluru, points out that these cities divert waste away from overflowing landfills towards recyclers, insist on segregation at source, and integrate the informal waste sector to ensure their continued access to livelihood. This provides valuable insights for the Corporation in improving the SWM policies followed currently and thereby moving towards the goal of zero-waste Chennai.

A number of  NGOs, activists, residents’ associations, and individuals in the city are actively  involved in various waste management initiatives in different localities in the city. The second part of this story will look at how such initiatives contribute to address the gaps in  collection, segregation, and recycling of  solid waste.

With successive stages of unlock underway, how can the crowded streets, shopping hubs, markets and buses of Chennai become spaces safe for people?

Many Chennai councillors unaware of Area Sabhas and Ward Committees

How many Chennai councillors know about Ward Committees and Area Sabhas? Will they bat for greater public participation? A survey finds out.

Tambaram has a new Corporation, but not all residents are happy

The creation of Tambaram Corporation has evoked mixed response from residents of the municipalities and town panchayats to be merged with it. Here’s why.