In April 2019, the Madras High Court, acting on deoccupation orders issued by the Chennai Metropolitan Development Authority (CMDA), directed the Greater Chennai Corporation (GCC) to demolish the structures put up by a restaurant chain on Old Mahabalipuram Road, on land that was classified as residential.  The Court struck down the reclassification and subsequent planning permission granted by the GCC as ‘fraudulent’.

This is a rare occurrence, not just in Chennai, but in most of our rapidly growing cities. As urban India grows, and larger numbers of people migrate to cities, commercial establishments of every hue and size begin to mushroom in hitherto residential neighbourhoods. Many long time residents would echo P Vijayalakshmi’s sentiments – she has lived in Sriram Nagar of Adyar in south Chennai for over two decades, but decided to move to a suburb last month. The reason was simple: the neighbourhood is not peaceful anymore.

The once only-residential neighbourhood has now evolved into mixed space with both residential and commercial units. The house next door has been turned into a restaurant; their exhaust system — which is just outside Vijayalakshmi’s house — releases hot fumes from early morning until late in the night, thus depriving her of a simple ‘luxury’ – opening the windows. “The roads are always congested, and there is incessant honking.  The sewage gets blocked often as the pipelines were not constructed to carry so much load,” said Vijayalakshmi, as reasons for her move.

Well-known historian and businessman Sriram V has a similar story to tell. His family lived on Kamaraj Salai in Raja Annamalai Puram since 1969, on a plot they bought seven years earlier. When Sriram and his wife moved there in 1993, they noticed it was already starting to change, but nothing prepared them for the commercial onslaught of the last ten years: Constant noise pollution from loud speakers playing in a community hall, lack of ventilation due to a building next door built in flagrant violation of rules, often finding their own gate blocked by a commercial vehicle or bus parked without permission. Finally, they could take it no more, and moved out earlier this year. Sriram says, “We were the only residents left on the entire stretch, all our neighbours had moved away”.

Do you relate to Vijayalakshmi’s or Sriram’s story? Are you also fed up of mushrooming restaurants, gyms, beauty parlours, cafés, offices, schools or shops within the predominantly residential area you live in? Electricity supply is often interrupted because the load on the grid has gone up, sewage is blocked because it was never planned for so many people,  groundwater resources are further stressed, the neighbourhood security is compromised because there are vehicles parked at all times on the street, vendors appear from nowhere to service the needs of the office goers, visitors litter the area because they feel no sense of ownership,  and your once idyllic neighbourhood is now dirty, unkempt, noisy. This is not what you signed up for.. How did this happen? Is this even legal?

Have you heard of Zoning? Did you know that there is a law that restricts the growth of commercial establishments in residential areas?

Before we get to discussing the law, it is important to understand the concept of zoning.

Zoning refers to the process of classifying lands within a municipality into zones such as residential, commercial, mixed and more. Chennai Metropolitan Development Authority (CMDA) established in 1974 by the Government of Tamil Nadu is the body that develops and enforces the Development Central Rules (DCR) for all zones within Chennai Metropolitan Area (CMA) that covers an area of 1189 square kilometres with a radius of about 30 kilometres. 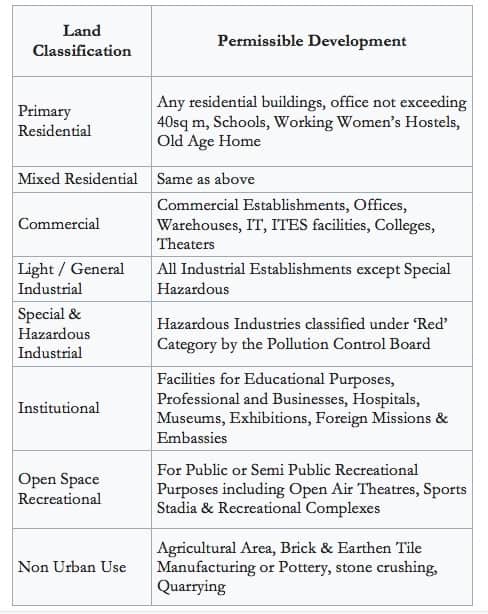 You can check the classification of your locality by filling the name of the local body and localities name here.

Chennai, like every city, developed a master plan in 2008 with respect to its land use, to serve as a blueprint for future development. Based on public consensus and planning initiatives, master planning is about making the connection between buildings, social settings, and their surrounding environments. This exercise must engage the local community and aim to build consensus.

Sushma Patankar, Director at C. R. Narayana Rao (Consultants) Pvt Ltd one of the largest design companies in India, says, “Citizens must have the opportunity to participate and be heard in the reclassification process of zones. Although any proposed reclassification is currently already being published in leading English / Vernacular newspapers giving the public a duration of 45 days to opine/object, a prominent notice put up at the ‘subject’ location/site for a period of about 1-2 months, will give the residents time to observe, take notice, and object with sound basis, if needed.”

It, therefore, devolves that change of land use zone must be done with neighbourhood community consensus.

Residents are inevitably the worst-hit when commercial establishments take over; their quality of life is highly compromised.

The 900-metre stretch of Harrington Road from Shoppers Stop to the Subway under the train line, has nine schools, two hospitals, three auditoriums, besides several restaurants, cafes, shops, offices. The land on which the schools and hospitals are located is marked ‘Institutional’ as per the land use map accessed from CMDA’s website, while the rest is shown as primarily residential. “Yet the Corporation has been giving licences to conduct commercial activities in these residential properties and the Traffic Police have been sanctioning the same by their refusal to take a stance,” says Sheetal Parakh, a long time resident of Harrington Road, and member of a local citizens group, “All this is done with no notice to the neighbours/community who are the most affected.”

Time for citizens to act

The CMDA land use as shown in the master plan is frequently disrespected and urban planners say that residential areas have turned into mixed localities, without the knowledge of the residents themselves.

But can residents do anything if that is not respected?

The answer is, Yes.

The most important responsibility of all citizens is to be vigilant. Look up the existing classification of your area in the CMDA land use map. If your area is classified as mixed residential, then read up on the rules regarding commercial establishments in such zones. For example, there are rules regarding how many parking spaces a restaurant must provide within its premises for the number of covers planned.

If a commercial enterprise comes up in your residential locality get a group of residents together and ask questions. If information is not forthcoming, lodge a complaint with Corporation’s helpline 1913 and request them to transfer the complaint to the works department of Greater Chennai Corporation.

Transparency, implementation and citizen engagement will be key to a more livable Chennai in 2022

What are the various issues that Chennai must address to move ahead in 2022? Here’s a wishlist for the coming year by Sumana Narayanan of CAG.

Why amateur badminton enthusiasts in Chennai are a disgruntled lot

Football and cricket hog dominant space in the 210 Corporation-owned playgrounds, while the parks are meant for children’s play areas and greenery. Where, then, can one indulge her love for badminton, which is growing increasingly popular as a recreational sport among Chennaiites?

A guide to understanding the revenue and expenses of Chennai Corporation

Greater Chennai Corporation is the nodal agency for most civic and infrastructure projects in the city. Ever wondered where GCC gets the funds to execute all these projects?