Is the Small Bus an opportunity or a liability for cash-strapped Metropolitan Transport Corporation (MTC) in Chennai?

All comments made by MTC on the question give the impression that the Small Bus service is a drain on the finances of the Corporation. The bus corporation says not many people are using it, and therefore it is being curtailed or withdrawn, while people say the service is not reliable and often simply vanishes without notice. This report in The Hindumentions some problems in the service, although it does not contain new information on what the present situation is on the ground.

The truth is that Chennai’s Small Bus service does not really connect the major hubs that people use: Metro stations, bus termini and suburban train stations. It is not surprising that people prefer the costlier share autorickshaws where these are available, because they are deprived of a frequent small bus.

But MTC did not start this way. Initially, the AIADMK government dragged its feet on introducing this feeder or last mile service to interior areas (that is reported by DTNext here); the concept was proposed by the DMK government under M. Karunanidhi, based on its positive record of operating small buses in the districts successfully during the 1996-2011 tenure.

After painting the small buses using a theme inspired by the party’s two leaves symbol, the AIADMK government finally introduced them, but with no scientific route planning. It acquired 200 small buses in all subsequently.

Even the arrival of the first phase of Chennai Metro did not help much. Although some bus routes were linked to Metro stations, they were too few and far between, and even here, share autorickshaws continue to be more efficient – but expensive.

When I filed a Right to Information application last year on which Small Bus routes touch suburban train stations, Metro stations and MTC bus termini, this is the reply provided by the corporation. Of course, 2019 is different, and some of the buses have been taken to other districts and some are serving as staff buses for MTC: 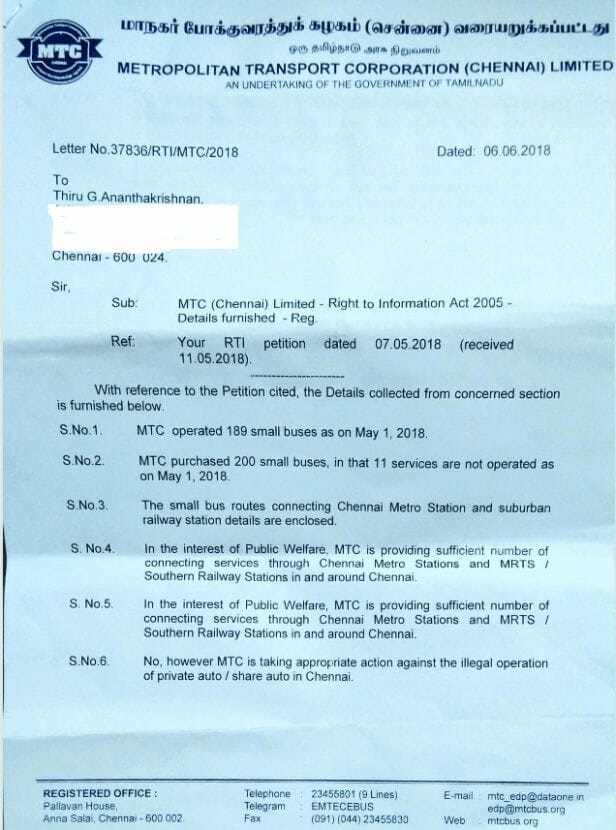 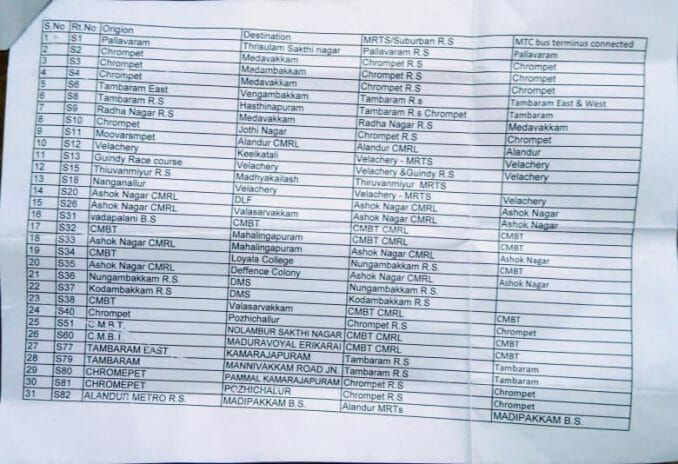 If such extensive Small Bus connectivity to rail and bus interchanges was indeed introduced, how did the concept fail?

It is evidently the lack of service on the one hand and the efficiency of the much smaller 8-seater share autorickshaws that have affected the operations.

Rather than rectify the deficiencies and increase the frequency of service, MTC’s response has been to withdraw routes, one recent example being S78 in Rangarajapuram, Kodambakkam (Vadapalani to T. Nagar). Earlier, S30 was withdrawn.

On many of the other routes that survive, the frequency has been reduced sharply, making them less and less reliable. New connections are not being thought of.

Yet, it is still not late to upgrade to a good feeder bus service that caters to the Metro stations, Suburban Rail and MTC depots. Share autorickshaws do not operate to all of these. They are confined to some narrow arteries, but have been able to gain traction because of their frequency and availability. So an MTC small bus must be available at least every ten minutes, at the termini and they must go closer to residential localities. Passengers would be ready to pay twice the ordinary class fare for these.

MTC can, in addition, provide passengers with Next Bus information, which can help them plan their journeys using Real Time Passenger Information.

The pity is that Chennai MTC does not even have a functional website today, after its http://www.mtcbus.org was taken offline for a revamp. Neither has the website appeared on a TN government server either as promised.

In its RTI reply, the bus corporation asserts that it operates sufficient small buses to provide connectivity at Metro stations and suburban train termini. Yet, to The Hindu, MTC acknowledges that there are mounting complaints.

The truth is that the AIADMK government is completely fragmented in its approach to Chennai transport, especially after Ms. Jayalalithaa was no longer on the scene. The government does not think it fit to bring all operators to the table to provide seamless connectivity, which would help the Metro get more passengers, and the passengers shift from one mode to another without a difficult experience.

[The article first appeared in the author’s blog, Straphangers United, and has been republished here with permission.]

About G Ananthakrishnan 11 Articles
Ananthakrishnan is a journalist based in Chennai. He was a senior editor at The Hindu, writing for the opinion pages. He held news management positions at the newspaper. His interests are in the intersection of urban affairs, welfare, the environment and development, and explores this from policy, governance and public engagement perspectives.

Looking beyond chess: The sports scenario in Chennai post COVID

Pursuing sports in Chennai comes with its own challenges, made worse by COVID-19. How have sports persons fared during this difficult time?

Ambitious budget for Chennai’s waste management but no coherent strategy

Attempts to decentralise waste management have hardly been enough to match the ambitious targets of the civic budget presented by the GCC.