Since India imposed a complete three-week lock down of the country, there has been a lot of discussion on the desperate plight of its migrant workers who have spread themselves thin across the country, in search of their daily bread. When the lockdown was announced, thousands of them tried to get back to their hometowns using whatever means of transport was available, and more often than not, on foot.

In Chennai alone on Sunday night, when the first 14-hour lockdown took place, local government figures revealed about 4,500 workers were stuck at the city’s railway station, unable to return home. In various states, migrant workers tried to reach home by foot. But what can be done if their homes are thousands of kilometers away?

One such community exists in Kanathur, a small settlement of people from Jharkhand, on East Coast Road, Chennai. 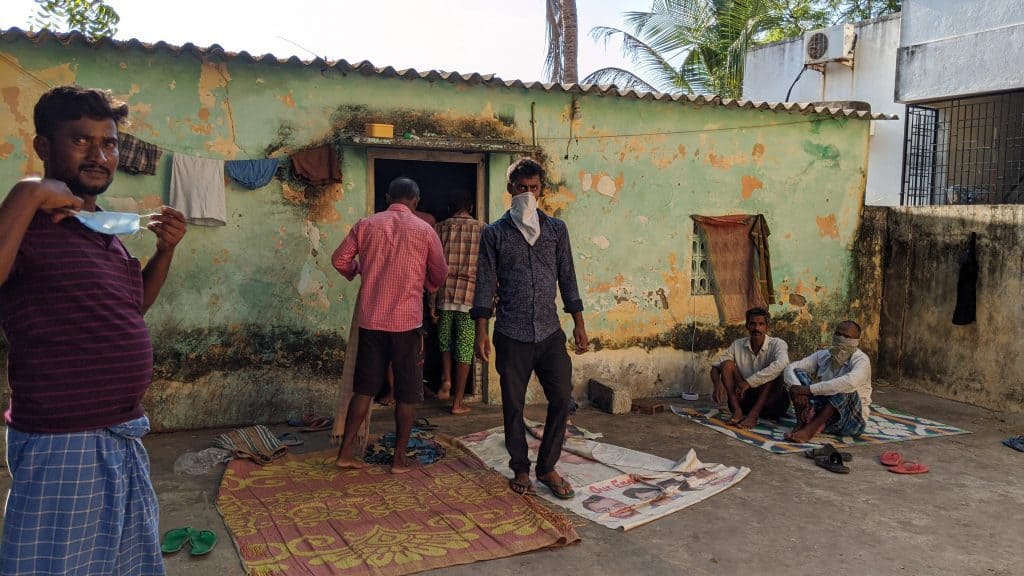 A house where 8 people live. 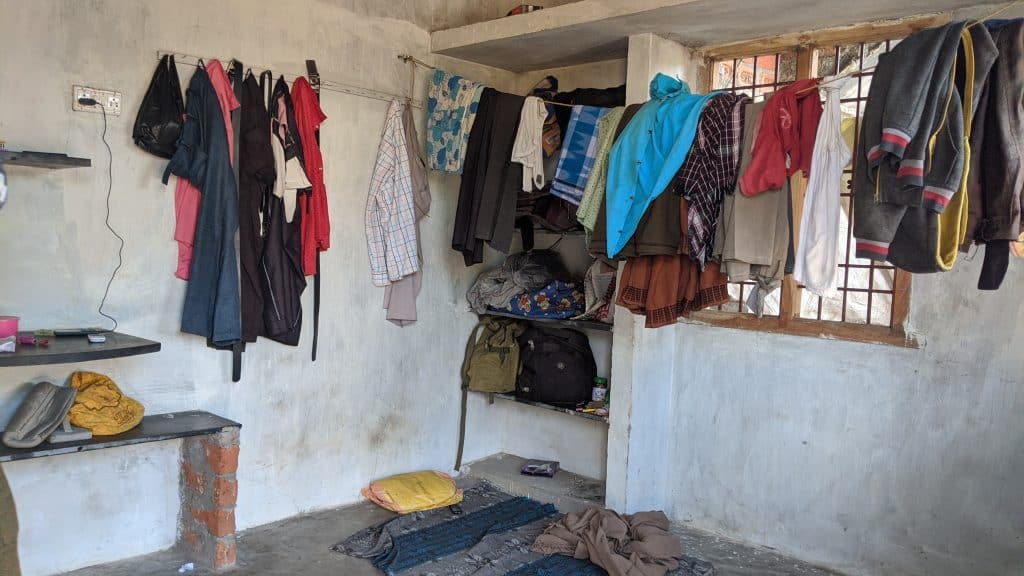 “We are a 100 odd families here, employed as masons or workers in the market,” says Ajay, one of the residents in the settlement. “We’ve been here for the last two years and some of us have been here for three years,” he adds. 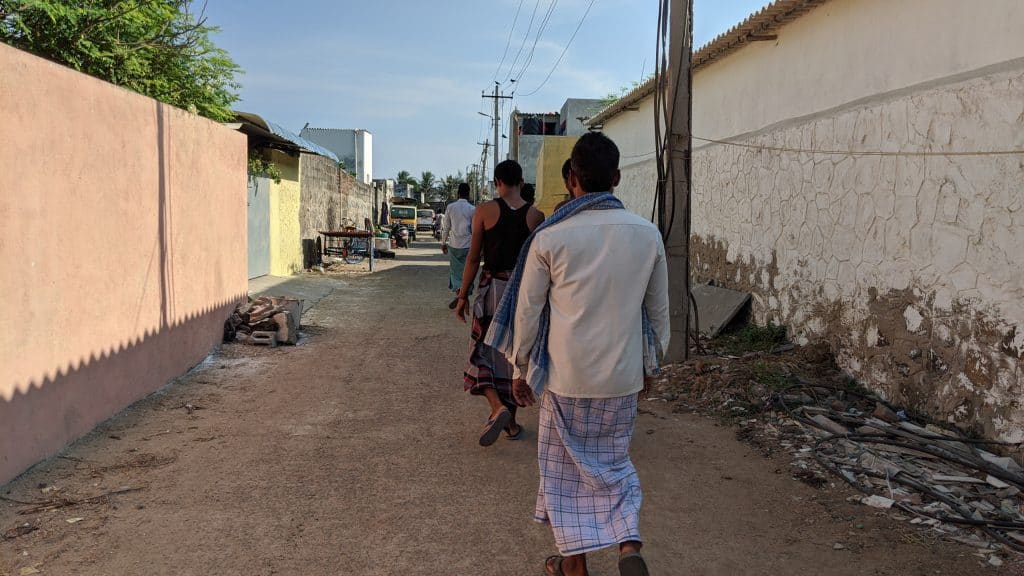 Leading upto the house where they stay. 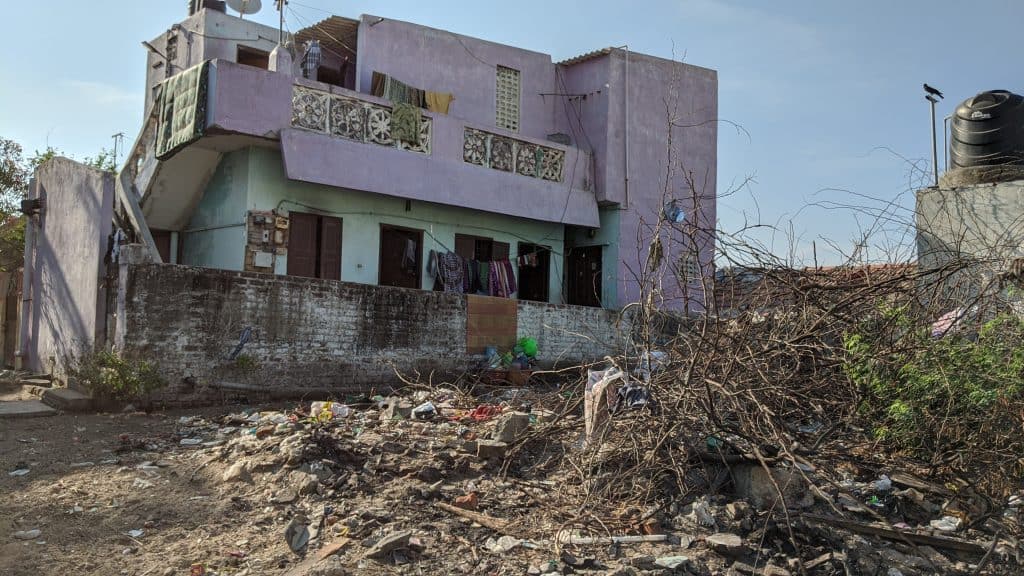 Workers take care of the surrounding hygiene. But its shows how badly it needs help from the Corporation. 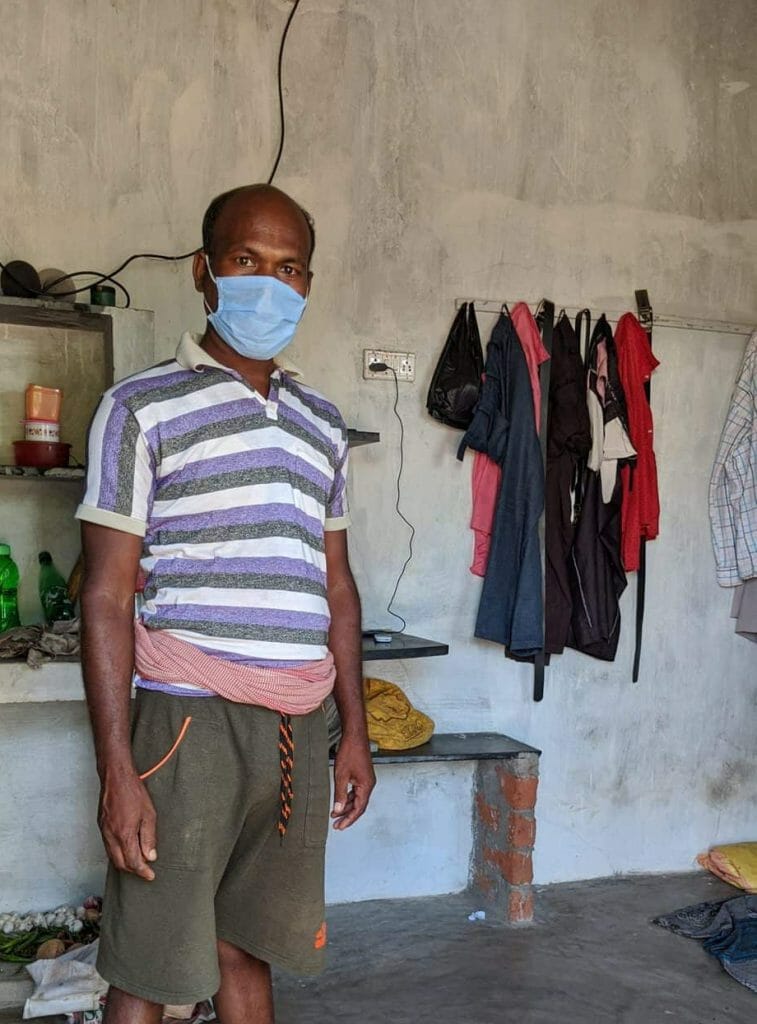 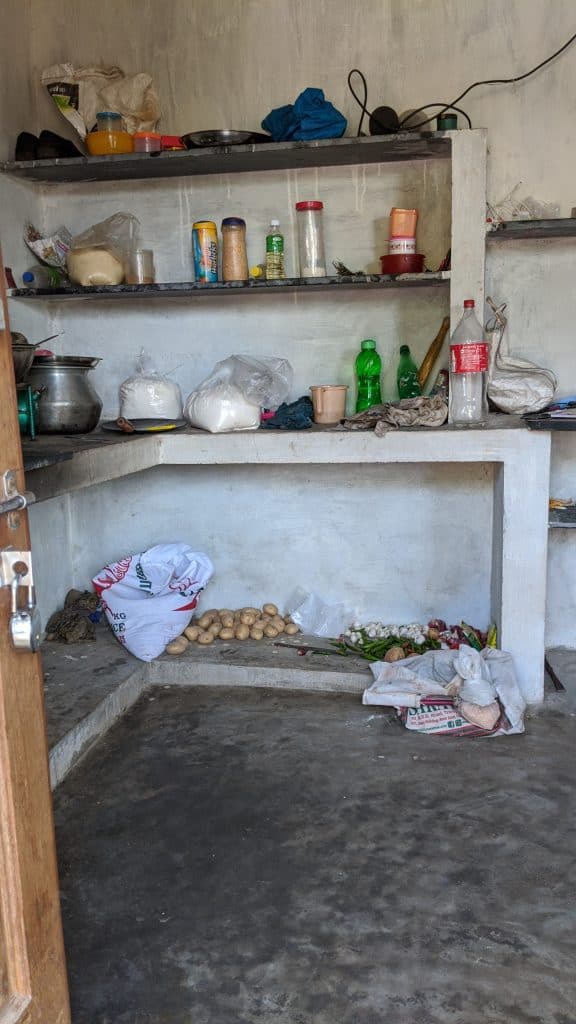 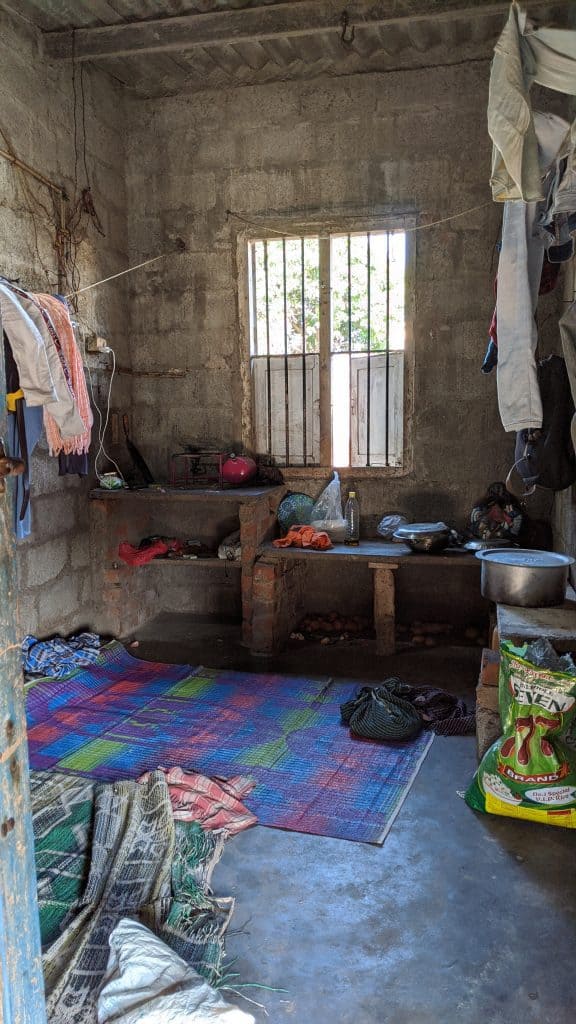 Paying a rent between Rs 2000 and Rs 3500, around six to eight people share a small space of 10×10. “We use the room for cooking and sleeping. We have only so much space,” says Mohammed, another labourer from Jharkhand living in this settlement.

Most of the people living here are men away from their families. “We do not have our families here. They are back at home. There are no children here. At least not in our community,” he adds “There are other small communities living with us, mainly people from Andhra Pradesh.”

The daily wage workers working in the nearby market earn up to Rs 850 a day. With this income stopped, NGOs like AID India have come forward to help them. “As soon as we came to know about their plight, we released an initial amount for their well being. This will take care of the grocery supplies for the first week,” says Balaji Sampath, founder of AID-India, who along with his counterpart Selvam has been instrumental in giving them the necessary items for survival. “Some volunteers have pitched in with financial assistance and that will also be released to them,” he adds. 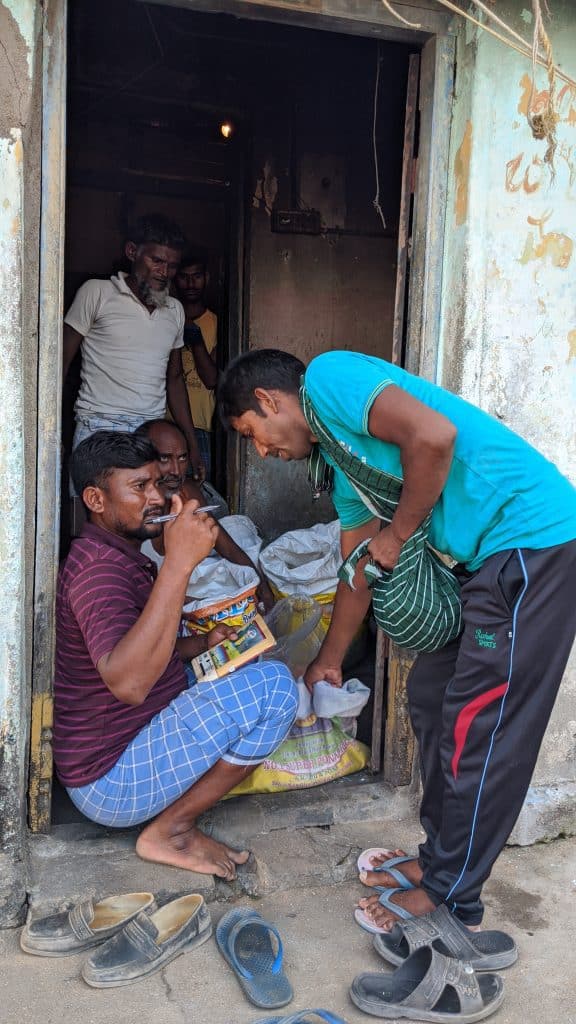 The workers appointed a person amongst themselves to take care of distribution. 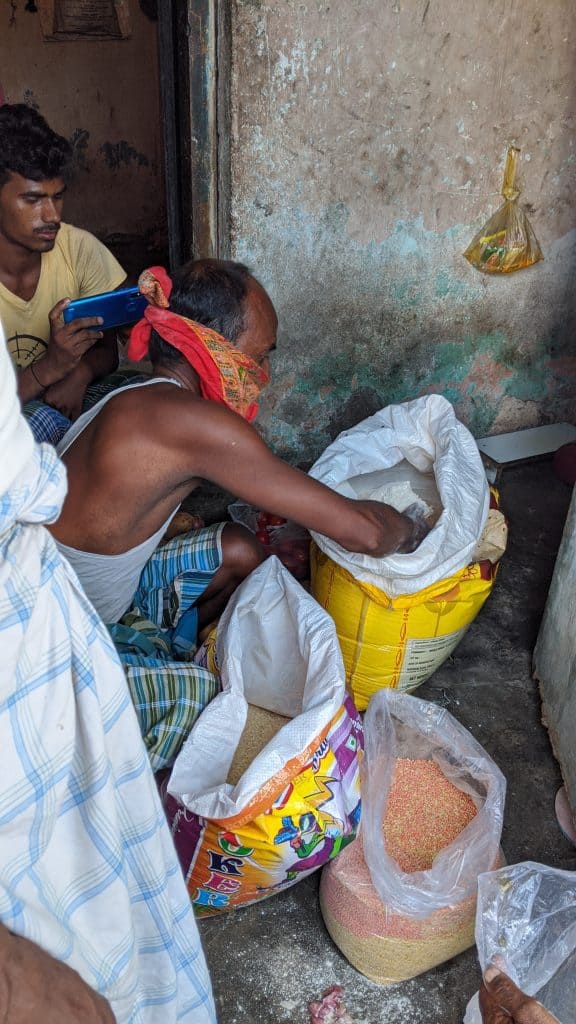 Rice, Flour and Dal along with veggies were the essentail items distributed. 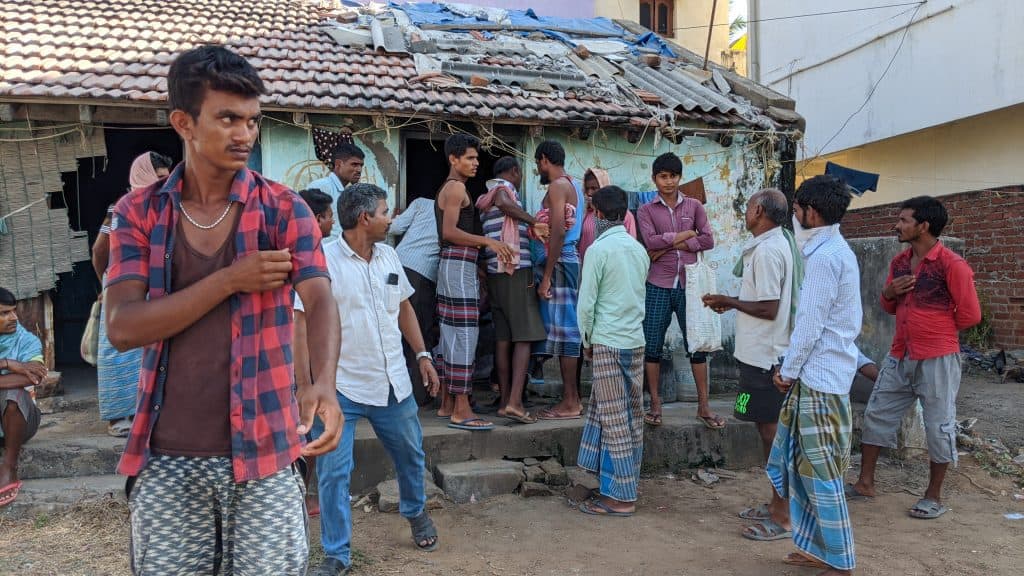 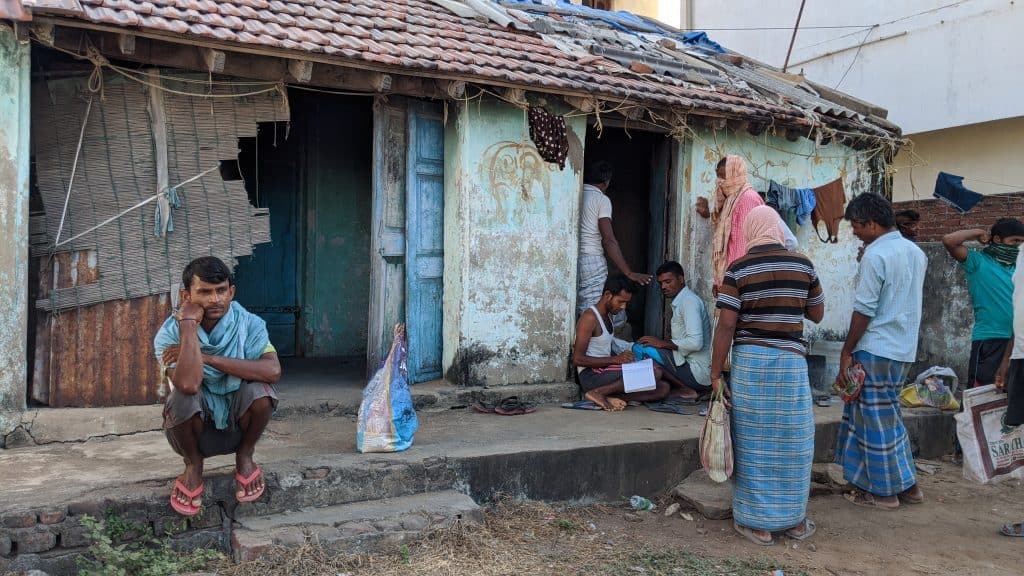 Worker waiting for his turn. 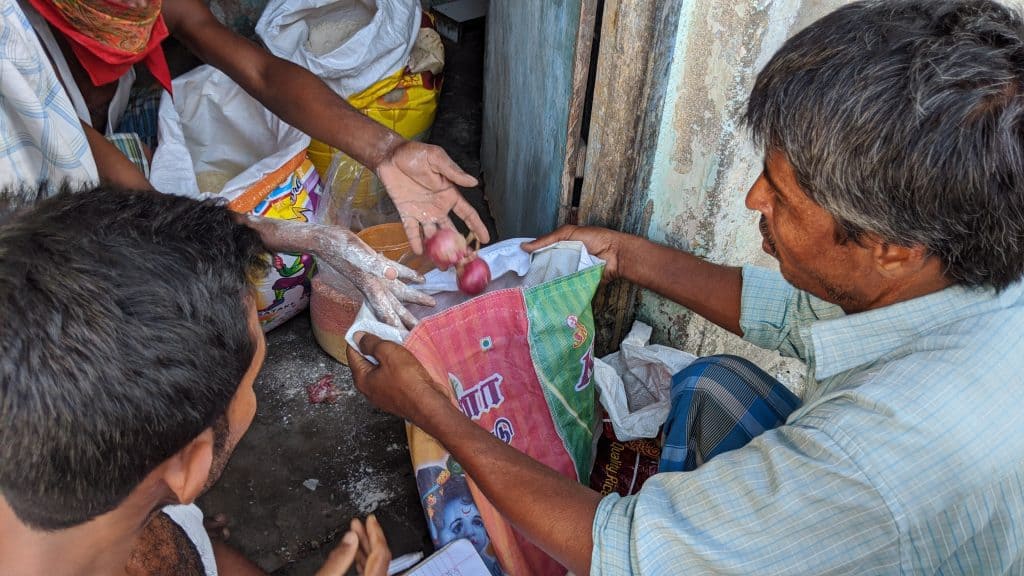 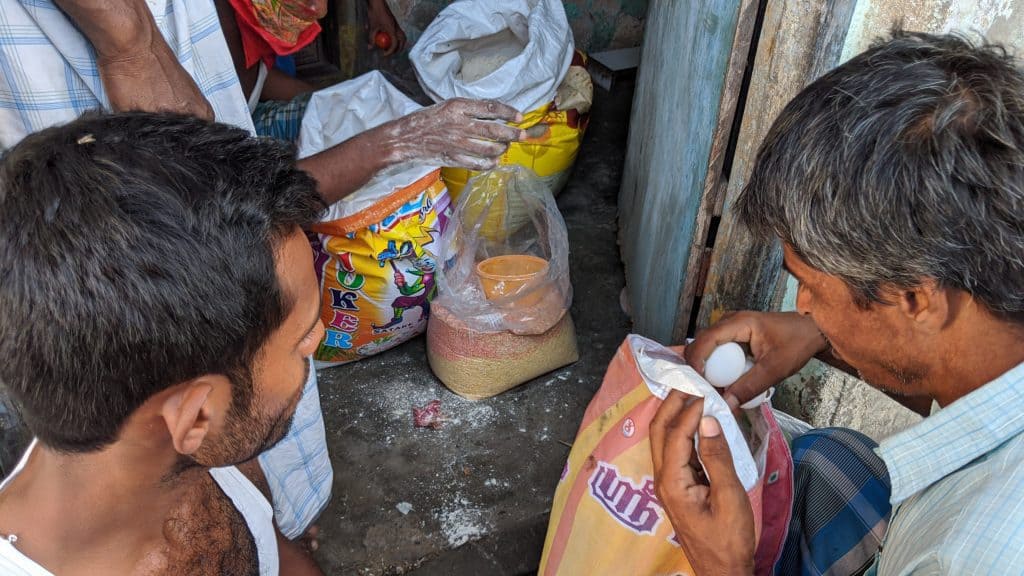 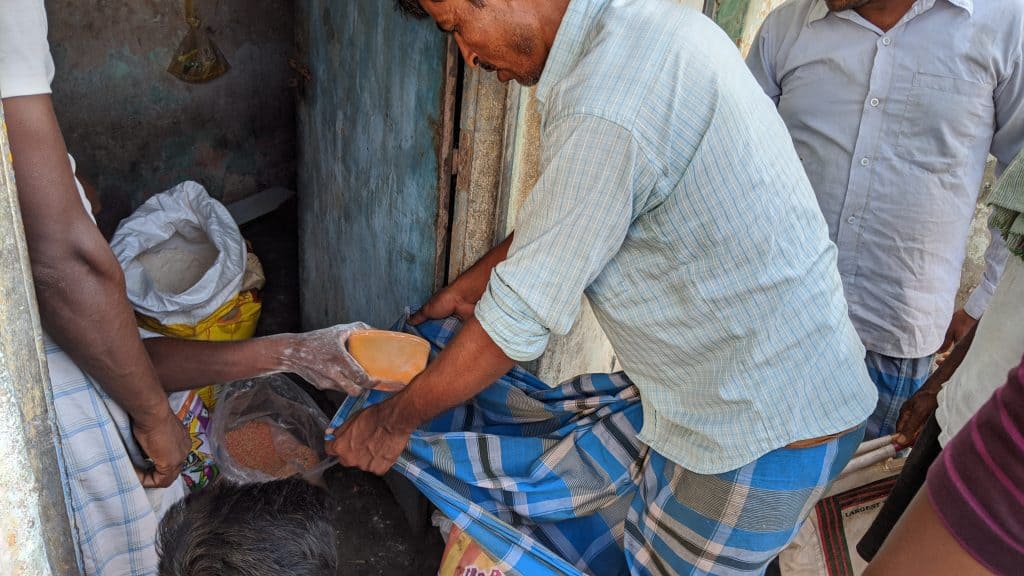 “When I came to know about this community, I worked with my friend Pandian, who owns the nearby Karthik Grocery store, to deliver the essentials to them,” says Selvam from AID-India. Pandian, whose store is just a few metres away from the settlement, delivered the essential groceries to them. “We have just delivered rice, dal, vegetables and oil to them. We will support them as much as we can,” says Pandian. 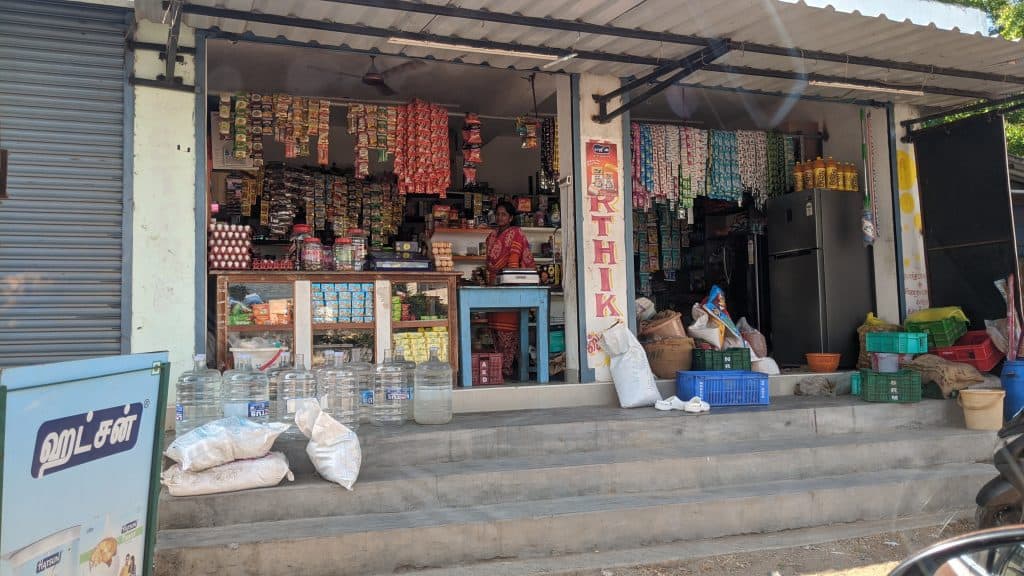 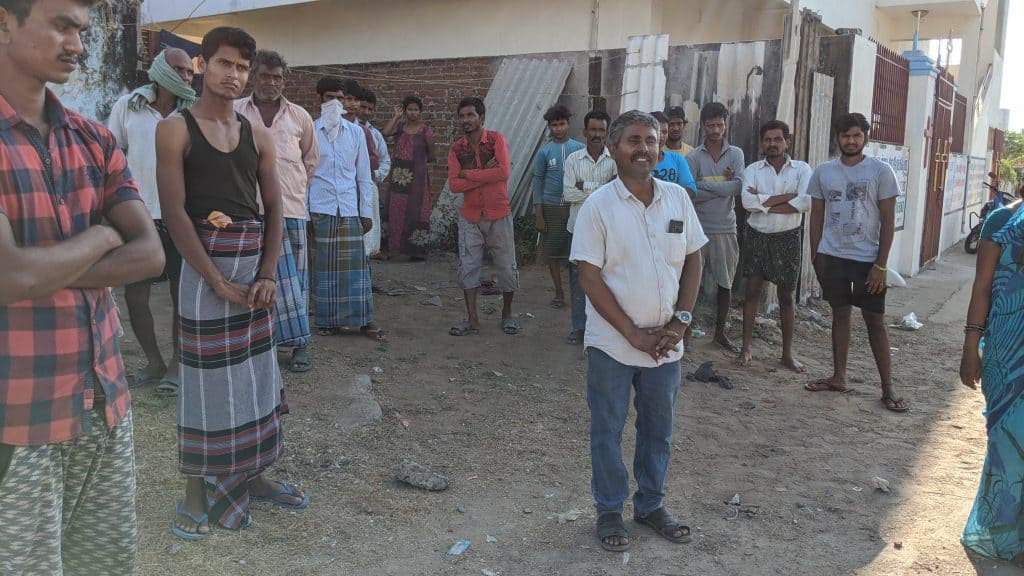 The workers have limited knowledge of the pandemic. A few volunteers gave them an understanding of the situation and the fact that the situation is completely new to many around them. They were taught the basic rules to be followed with respect to personal hygiene, and how to ensure they avoid crowding. “We have asked them to find 1-2 representatives who can talk on their behalf and collect the necessary food items,” says Pandian. “We cannot have a crowd of 50-100 approaching us everyday. We are making a list of people in each house and asking them to appoint a head who can come and collect the groceries, so that we follow the norm of social distancing,” Pandian says. 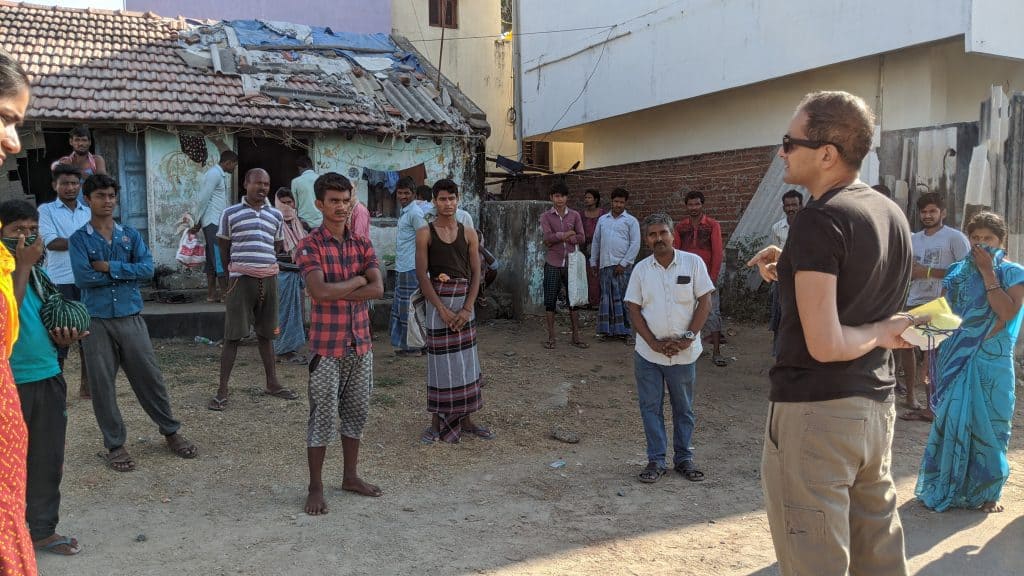 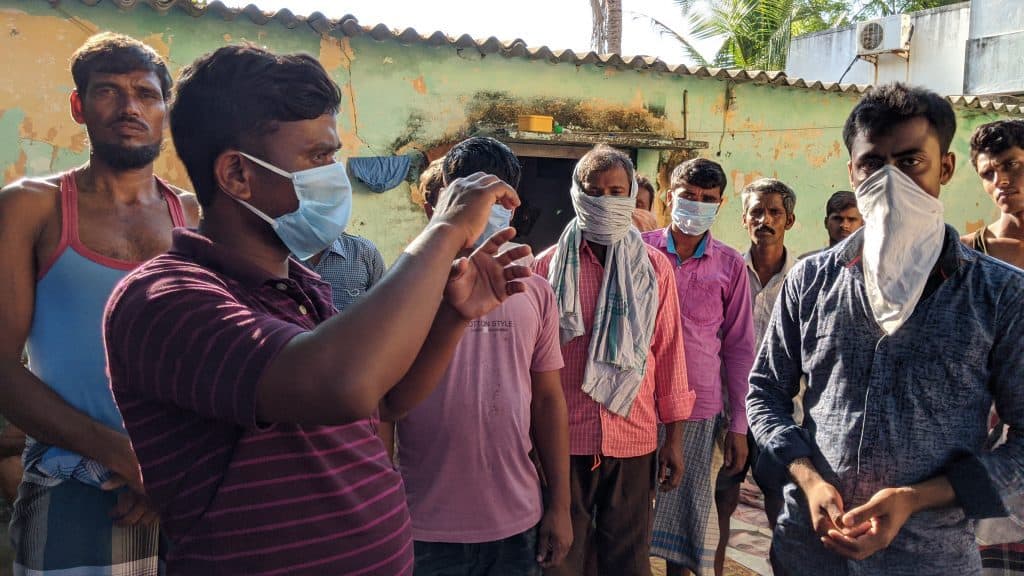 The workers are still far away from availing government benefits. Finance Minister Nirmala Sitharaman on Thursday announced a relief package worth Rs 1.70 lakh crore to help the nation’s poor tackle the financial difficulties arising from the Covid-19 outbreak. “A package is ready for the poor who need immediate help like migrant workers and urban and rural poor. No one will go hungry. The package is worth Rs 1.7 lakh crore,” Sitharaman said.

But with the people at Kanathur having no ration card, or Aadhaar cards, it is most unlikely that the schemes will reach them. Their family back home may avail the benefits as they reside there, but these migrant workers may probably be left to fight their own battle. 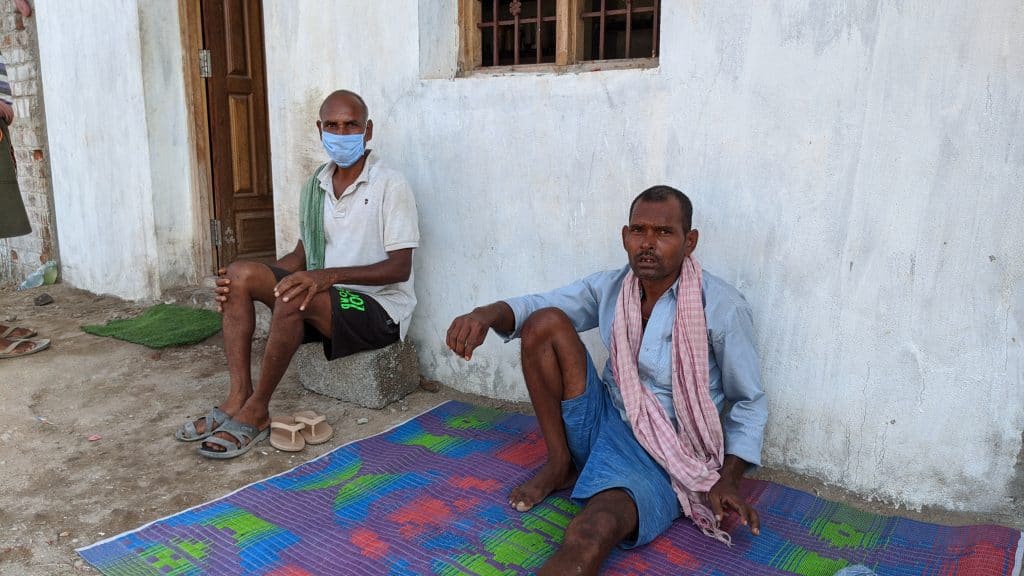 Clearly apprehensive about the future Distribution done for today. We live to fight another day.

All pics and videos by author, unless specified otherwise.

Chennai is home to nearly 150 species of butterflies. What do naturalists infer from that?