Chennai Metro Rail will connect two more sections with the airport in Tirusulam-Meenambakkam by March 2018: DMS on Anna Road and Chennai Central, the city’s most important rail terminal.

With that linkage, the rail system will effectively connect suburban trains operating upto Arakkonam in the West and Gummidipoondi in the northwest, from Central. It already links the city’s central bus station, CMBT, with the airport by rail. 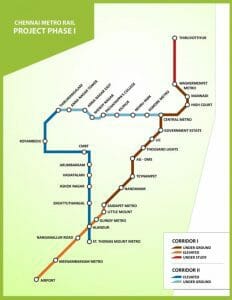 The timeline for the new connections was recently highlighted by an executive of Chennai Metro Rail Limited to a group of visitors, including this writer.

Connecting the premier rail head in the city, and Chennai Egmore, the secondary rail terminal and CMBT will provide a commercially viable section for Chennai Metro, while it waits to complete its delayed project on arterial Anna Road and the line to North Chennai.

About 150 metres of tunneling between Gemini (US Consulate point) to AG-DMS (click on map) is yet to be completed, holding up early operation of the entire line.

Some key points on the current operations of Chennai Metro:

[This has been reposted from the popular blog Straphangers United; the original post and more photos can be viewed here.]

About G Ananthakrishnan 12 Articles
Ananthakrishnan is a journalist based in Chennai. He was a senior editor at The Hindu, writing for the opinion pages. He held news management positions at the newspaper. His interests are in the intersection of urban affairs, welfare, the environment and development, and explores this from policy, governance and public engagement perspectives.

When COVID brought Chennai communities together

A look at how residents and welfare associations helped the migrant and daily wage labourers by volunteering with various NGOs.

It’s a ‘fair’ with a difference. Kasim Basith’s initiative, ‘We Are Your Voice’ organises an annual job fair for persons with disability and has successfully placed many of them in reputed organisations.

Now, grow your own veggies without mining soil and sand from nature

Sitting right here in your city, Chennai’s grand old kitchen gardener-activist, S.S. Radhakrishnan, has concocted a perfect organic substitute to soil. Here’s a complete guide that can help all avid urban farmers and gardeners make their own soil and pursue their passion in an even more sustainable way.