If you are an apartment or home owner in Chennai, you would most likely have received a form for self declaration of Property Tax, from the revenue office of Greater Chennai Corporation. Most home and apartment owners were caught unawares, not only by the requirement itself, as there has been no such form to fill in the past twenty years, but also by the deadline of August 31st to fill and submit it. Here is a quick explainer about the form and its connection with property tax.

According to a senior official from Chennai Corporation, there are 12.65 lakh home and apartment owners in the city of Chennai. All owners are required to pay property tax, levied on a half yearly basis.

The A-B-C of property tax

Property tax is calculated based on the plinth area (built up area measured at the basement), basic rate of the street in which the property is located, usage of building (residential or non residential), nature of occupancy (owner or tenant) and age of the building.

Property owners should pay the tax twice a year before the end of March and September. There is also an option to pay annually (second half in advance)

It can also be paid offline at the offices of the revenue officer or the assistant revenue officer of the Zonal offices I to XV and at any of the branches of Axis Bank, Canara Bank, City Union Bank, HDFC Bank, ICICI Bank, IDBI Bank and Indian Overseas Bank.

The Tamil Nadu Government in its Government Order (GO) dated April 1 2018, ordered the general revision of property tax in all the urban local bodies, to be taken up with effect from the current half year of 2018-19, as per the provisions of the relevant Urban Local Bodies Act. As per the revised plan, property tax has been increased by 50% for residential occupation and 100% for commercial buildings.

How can the self declaration forms be filled?

The GO requires property owners to self-assess their properties. 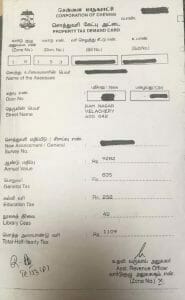 Owners should have the basic details ready – Zone number, Division (ward) number and Bill number  – this information is available on the Property Tax card.

“Even though the records of house owners are available in the revenue department, it is the procedure to inform them. Besides asking the owners to evaluate their own property, self declaration forms serve as the information base before we increase taxes,” said the corporation official.

Self declaration forms are available for download on the corporation’s website; they can also be collected at the respective zonal offices. It is a fairly simple form, and the online process takes five minutes, according to a home-owner who filled it last week.

It is also important to register one’s mobile number with the Corporation, in order to receive alerts and OTPs for availing various civic services online. If a mobile number is already registered with the GCC, an OTP verification is all that is required to pull up the home owner’s property tax record. Some fields such as name of owner, address, etc are pre-filled. If a number is not previously registered, a home owner can do so now and proceed with the online verification right after that.

With the help of the Property tax card or the original property documents, the following details need to be filled in –

What happens after the form is submitted?

Upon submitting the form after completing the above details, an SMS will be received by the home-owner acknowledging the submission with a reference number. Offline submissions will also receive a stamped acknowledgement counterfoil.

By when does one need to file this form?

The deadline for submission of such self assessment declaration is August 31st, however no penalty has been specified yet for failing to meet this deadline.

It remains to be seen how effective this measure will be in increasing the GCC database of home owners in the city of Chennai.

**Postscript: Consequent to queries from many of our readers, the Citizen Matters Chennai team reached out to the Revenue department of the Greater Chennai Corporation for guidance on correction of errors in records and filing.

If there are errors in the records pulled up when a home owner enters his or her details, they can keep the details (Zone, Division, Bill and Sub numbers) handy and call the revenue department of GCC at 044 25619229, to request a correction.

However, if a self declaration has already been filed and there are mistakes in it, the assessee must come to Ripon Building in person to request the correction, according to the official spoken to.

Victims of stereotyping: How Chennai treats migrants to the city

The theme for International Migrants Day 2018, observed on December 18th, is Migration with Dignity. Conversations with migrants from other states to the city, however, reveal that dignity is the last thing they can take for granted even as they continue to live and work here.

Under guidelines issued by the Urban Development Department, all unauthorised buildings built before July 1 2007 can be regularised upon payment of a penalty.

Why celebrate giving? Humans of Daan Utsav tell us why

What can a week-long festival of giving achieve? Saradha Krishnamoorthy recounts her personal Daan Utsav story to answer that one question that has bothered many a skeptic!