As Dr Alby John Varghese, the 31-year-old Regional Deputy Commissioner (South) of Chennai Corporation took some time to rest, he was pleased to see the way things were being handled by his efficient team during the “Reuse and Reduce Sale.” Citizens were called upon to donate various lightly-used items that were still in usable condition but which they no longer needed.

We managed to steal some time from his schedule for a quick tête-à-tête and understand how he and his team pulled this off.

How did you come up with the initiative?

The concept of the swap shop is not a new thing. It is there in various other countries. It’s an initiative from Chennai Corporation to promote reuse. In my previous tenure, we had a similar initiative on a smaller scale, but we noticed two problems. One, since it was a regular thing, people started dumping many things that were not reusable. Second, after the initial launch, people didn’t want to come and take things back. So we thought about this and decided to conduct a limited event and add value to the goods, rather than just giving anything. In this format, it would be useful for people from all spectrums of society. The R&R Sale is not a charity sale, since we are selling items at a price and people from all economic strata are coming and buying.

How much time did this take to conceptualise, plan and execute this event?

It didn’t take us much time. We planned it last Monday and we pulled it off in a matter of 5-6 days. We have a very good set of resident welfare associations (RWAs) and volunteer associations that helped us spread the message. We put a message on digital and print media who were very supportive in spreading the message. Whatsapp messages played a role too in creating awareness and the volunteers of our team put in a lot of effort.

A lot of inputs came in from the engineers, corporation staff and volunteers in the residential associations.

With young IAS officers joining Chennai Corporation, do you foresee a change in the thought process within the body?

We do think that we are consuming a lot. The kind of environment we live in, there is a sale every six months and things are being sold at very cheap prices. Due to this people also end up buying things which they don’t necessarily use. People look at things knowing they may not need it, but still buy them since it is available at such a low price.  We are conditioned that way and as a result, there’s a continuous increase in consumerism. We need to reduce our consumption and at the same time, if we can, we must reuse whatever we can. I do not want to take any credit for this. The team pulled it off and all credit to them.

What about the continuity of such initiatives…

This is the first such R&R program in Chennai, and in fact in Tamil Nadu, on this scale. The Corporation Commissioner, G Prakash has inspected the programme and we do have plans to scale this up to at least 3 or 4 events per year. 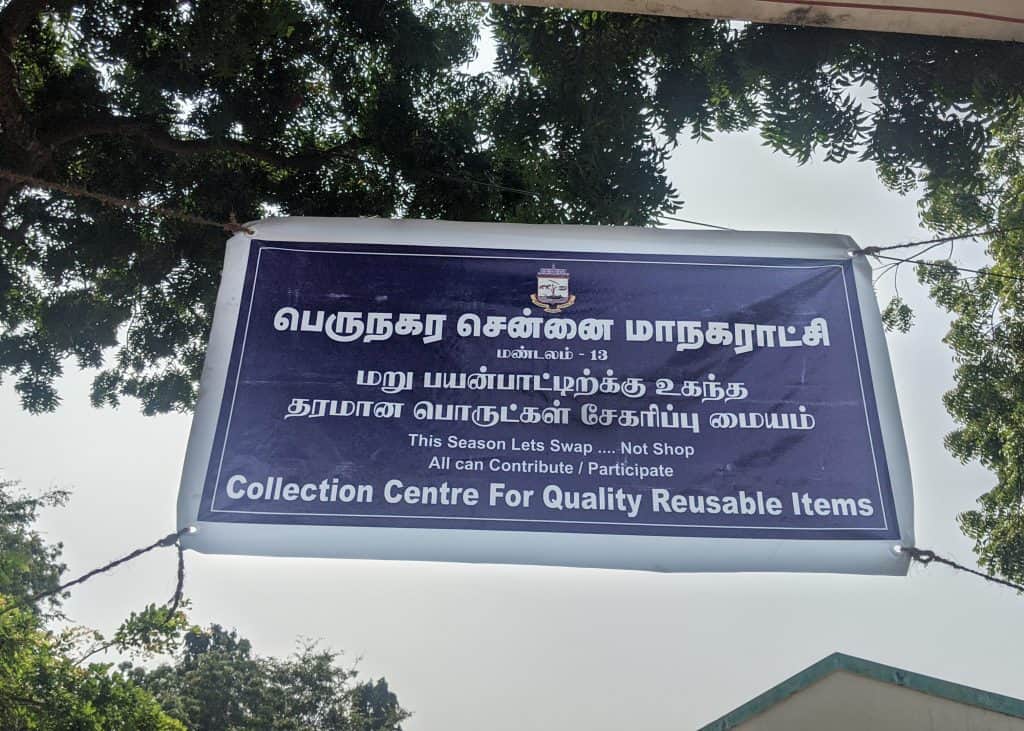 Entry to the TNHB Community Hall 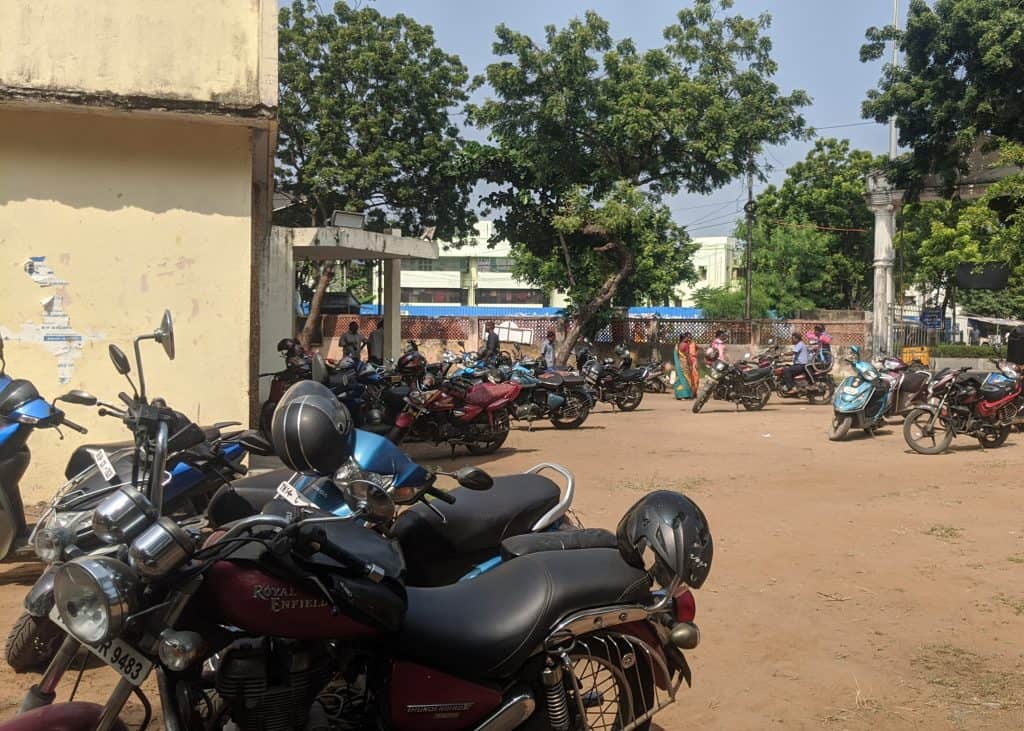 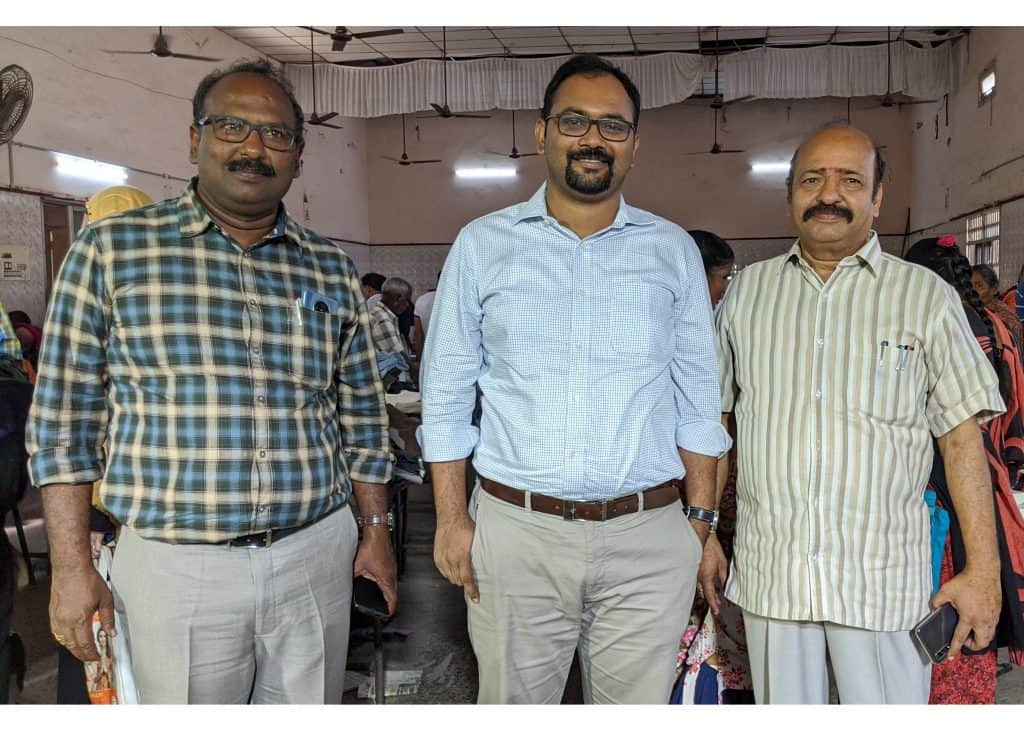 A donor dropping off Saris and other clothes 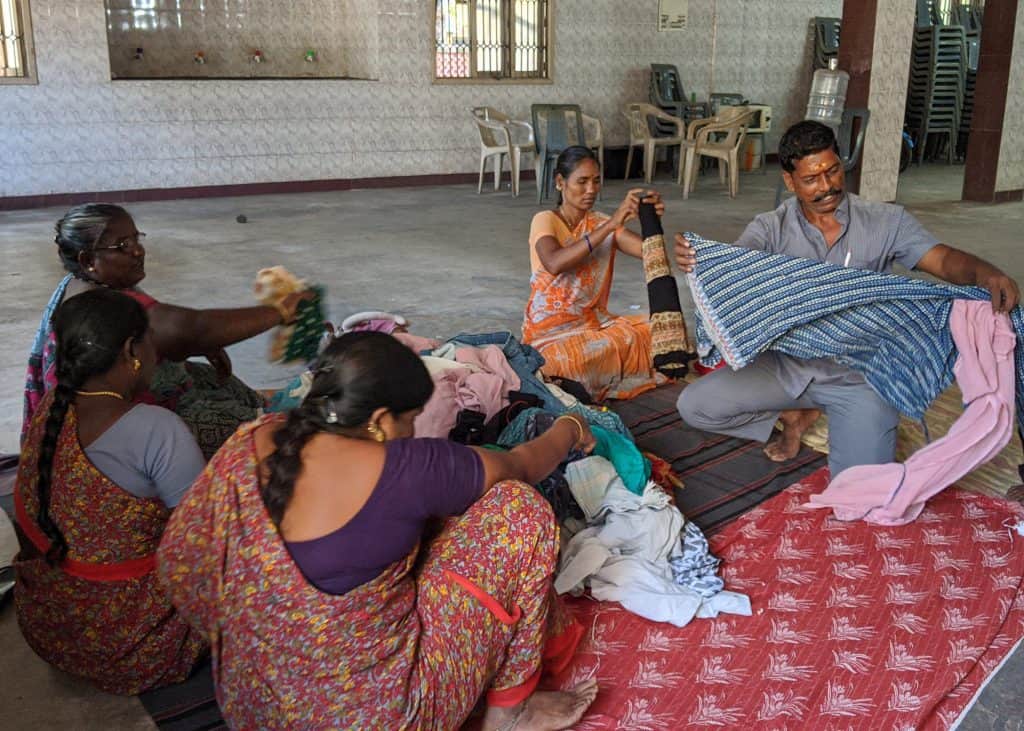 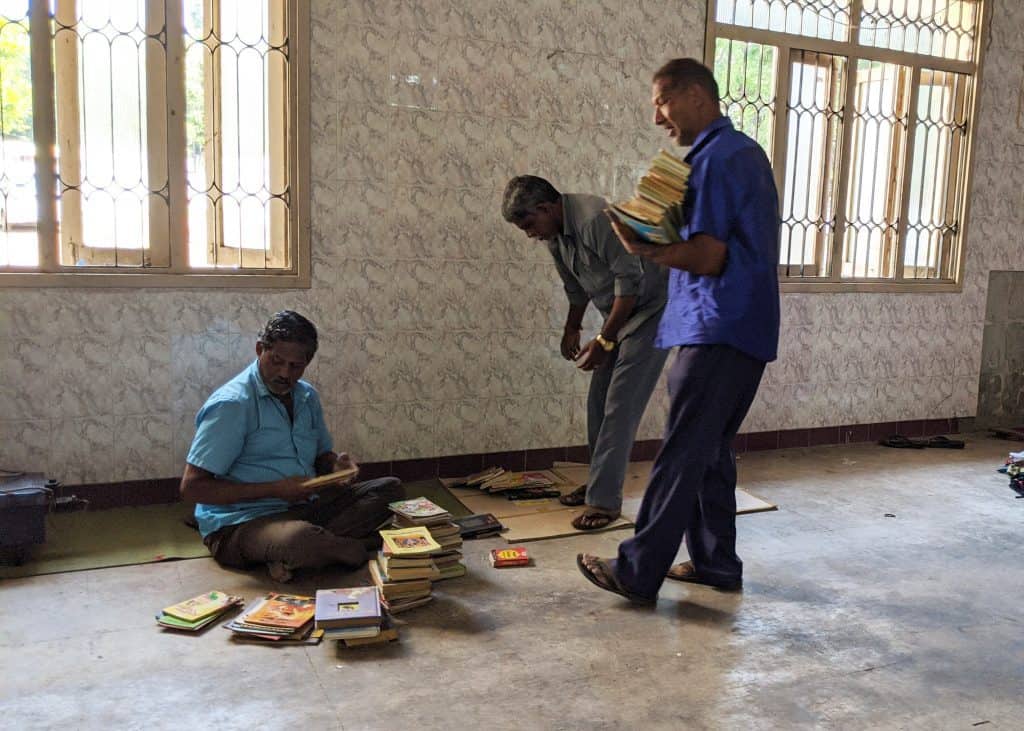 A Visitor going through the books and their quality A Visitor going through the books 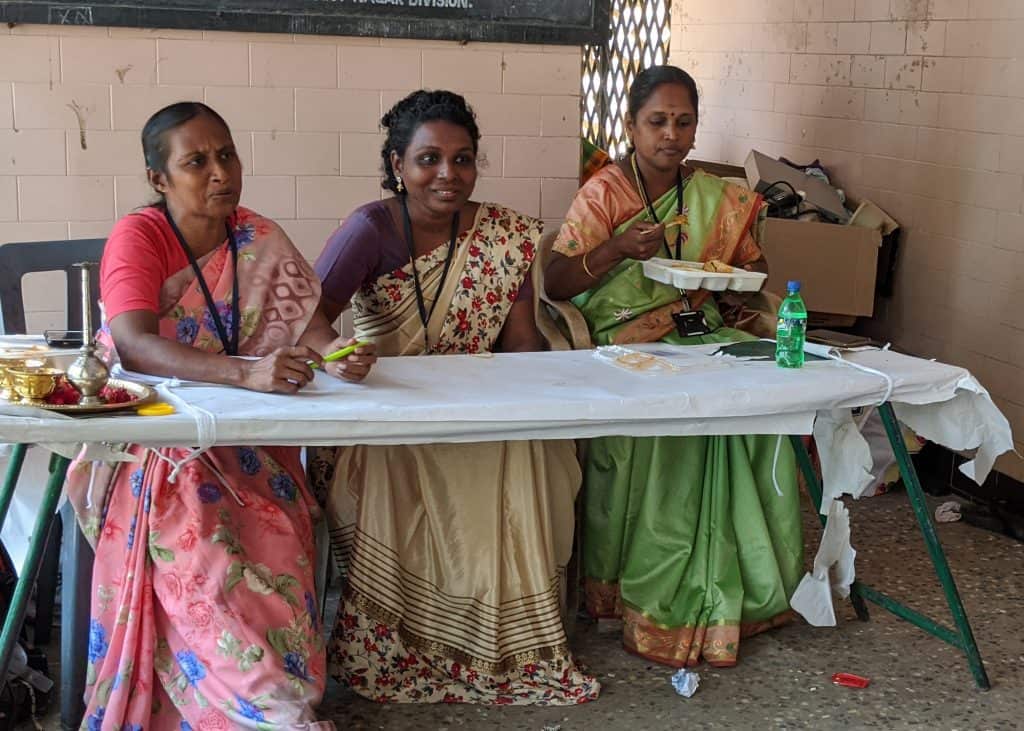 Having lunch during the limited spare time Registering names for the draw. 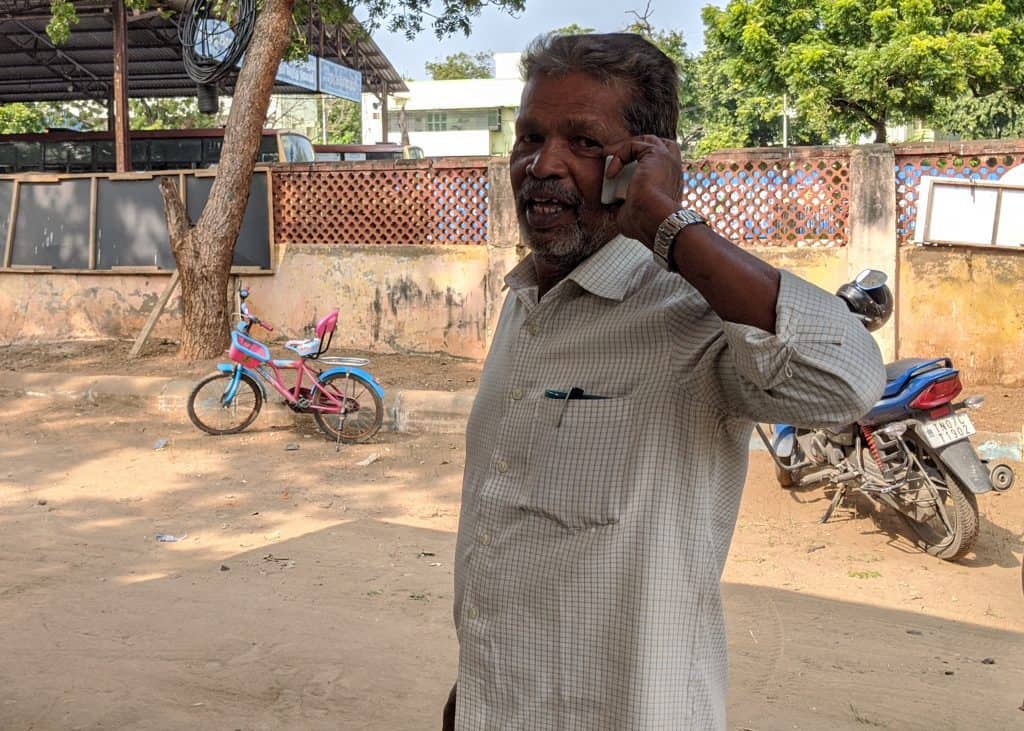 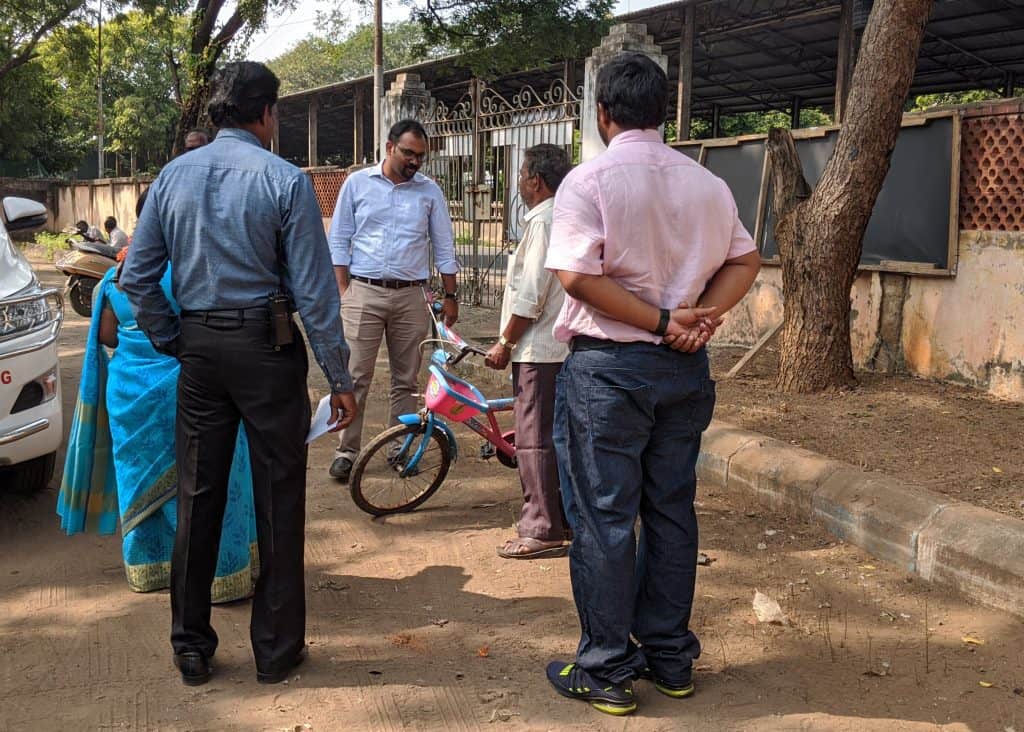 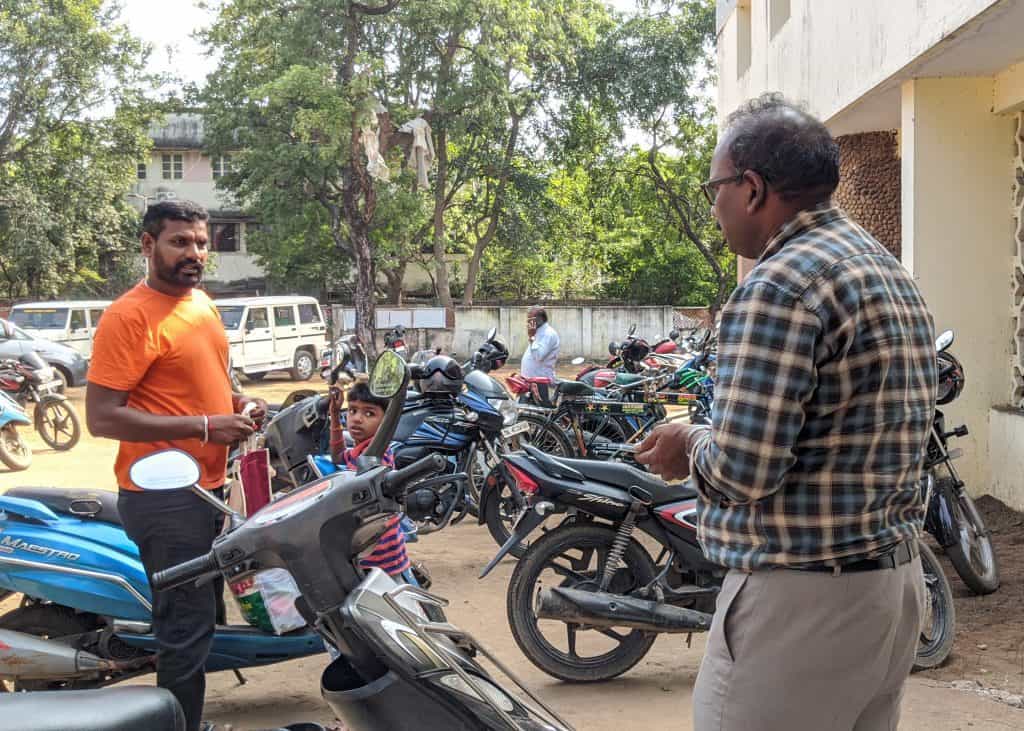 Thirumurugan, the Zonal Officer In charge, Adyar walked us through the process and its economics. “The Corporation had set up a receiving team of 10 to evaluate the items coming in, segregate them based on their condition and value them accordingly,” he explained, “Pants and Saris were priced between Rs 10 and Rs 20. If something is in a very good condition, the cost would be around Rs 100 or Rs 200.”

The officer also said that it was not possible to have an elaborate process, given that this was a 2-day programme. Anything that came in was put up on display immediately. On Jan 12th around 1800 sale receipts were issued, though the number of individual items sold had not been estimated when we spoke. “We expect around 4000 to 5000 items to have been sold and the sale value to be around Rs. 20,000, altogether,” said Thirumurugan.

Get the Citizen Matters newsletter
About Mahesh V 22 Articles
Mahesh V is an upcoming photo artist who loves to experiment street and documentary style photography. He can be reached at maheshvs007@gmail.com
Advertisement

A roadmap for MTC: Share plan with bus commuters in Chennai

Here is how my family fought the coronavirus

COVID deaths in Chennai: What’s the mortality rate in your zone?

Private disinfection services step in to fill Chennai Corporation’s gaps; how can you avail the service?

When a child with special needs got lost in Chennai

Why we should not oppose Sunday lockdowns in Chennai

In photos: What are Chennai’s canine protectors doing during the lockdown?

Knock, knock! Are you ok?

2013-2020 and looking ahead: How Chennai is trying to reclaim its streets for the people

100 days of duty; no break, no quarantine: How Chennai cops are falling to COVID-19