Speeding two-wheelers, Electricity Board (EB) boxes (working or otherwise), tree stumps and encroachments, and no space to walk. The picture this conjures explains the pathetic state of footpaths in Chennai, a city with a significant percentage of pedestrians in the traffic.

On one hand, the Greater Chennai Corporation (GCC) claims to be creating more footpaths and cycle paths in the city. “We will soon be creating footpaths along 80 percent of the city roads, to facilitate the movement of pedestrians,” said a senior corporation official. On the other, the civic body has flouted several rules in its footpath construction in several areas including Adyar’s Kasturba Nagar, Burma Bazaar and Mylapore.

A recent instance in Adyar exemplifies the apathy and lapses that surface during footpath construction, and eventually put pedestrians’ safety at risk.

Claiming that  pedestrians of Kasturba Nagar will get broader pavements to accommodate the differently-abled as well, the BRR department hurriedly commenced and completed the work. The dual pavements on the lane that connects to Sardar Patel Road and LB Road were 9 feet and 3 feet in width respectively. Residents, on many occasions, met the corporation officials to stall the work which was being done without clearing the EB pillar boxes and encroachments.

“On one side, they constructed a 9-feet footpath, while on the other, it is limited to three feet, as they did not clear the encroachments. The biggest question that bothers us is why the BRR department has constructed a footpath for a lane where no buses ply,” wondered Shanthi Kamalasekaran, an activist. Citizens have sent in photographs which show conclusively how the brand new footpaths are being used exactly for what they feared  — encroachments and unauthorised parking.

The same BRR department, which tried to lay payments between Theosophical Society and Olcott School on March 31, by digging up the existing pavements (which were in good condition), had to stop the work after citizens opposed it. The department, after promising to share the blueprint with citizens’ groups, quietly resumed the work, which is still ongoing.

*The EB pillar boxes which block the pedestrian movement were not removed before constructing the footpaths. This clearly shows that there is no coordination between other departments in the civic body.

*The road was constructed without milling the old road, which is in contravention of the recent Madras High Court order. Now, the footpath is laid taking into account the height of the unmilled road. It means that the existing storm water drain line should be raised again, wasting public funds”, said T  D Babu, a marine biologist and civic activist.

The BRR department suggested the placement of bollards at the entry of pavements to prevent vehicular access. Even ignoring the fact that they are no obstructions for two-wheelers, the civic body has not even constructed them as promised. “Barricades with railings throughout the footpath is the only solution to prevent two-wheelers from using the footpaths” said another resident.

Despite continuous badgering (by citizens), the civic authorities continue to be apathetic.  An official from the BRR department who is in-charge of the construction in Adyar said, “The process of removing encroachments is continuous. We will do it. However, there has been no proposal on the same yet.”

Fighting for your footpath is a Herculean task in Chennai. It involves raising local money, continuous monitoring, and relentless and persistent coordination with the civic body. A lot of planning and hardship went into the broad, encroachment-free pavements on Harrington Road in Chetpet. With nine schools, two hospitals and two auditoriums on a stretch that is less than a kilometre in length, Harrington Road has thousands of pedestrians especially school children that needed a safe, uncluttered pavement. A group of concerned residents got together to study traffic and pedestrian movement patterns.

“We brought in architect Vidya Mohan Kumar, who designed the pedestrian passage to be a seamless walk with tabletop pedestrian crossings and openings at the mouth of all avenue entrances, which would additionally make it disabled-friendly. An underground utility duct to carry the electrical cables was included, to avoid frequent digging up of the pavement,” said an active resident, who wished to be anonymous.

Once they submitted the plan to the Corporation, residents also took turns in monitoring the work. “Citizens should feel responsible for their pavements. We raise complaints against the vendors who encroach the pavements. After all, pavements are meant for pedestrians. Vendors can sell at the places that are designated for them,” said another resident volunteer of Harrington Road. They have also employed marshals to patrol the roads – these marshals warn, remove and sometimes even clamp the wheels of vehicles parked on pavements – a solution most other parts of the city can only dream of!

Whose footpath is it, anyway?

Success stories like that of Harrington Road are few and far between. It could be Burma Bazaar in North Chennai or the Luz corner in central Chennai, footpaths are eaten away by vendors, forcing the residents to walk on the busy roads at the risk of getting hit.

“At East Mada Street in Mylapore, the footpath has been converted into a parking lot by none other than a cultural centre called Bharatiya Vidya Bhavan, as there is no space inside their building. Free and non-encroached footpaths are becoming things of the past,” said C R Balaji, a civic activist.

Hundreds of examples of poorly constructed and badly maintained footpaths can be seen throughout the city, especially in North Chennai. 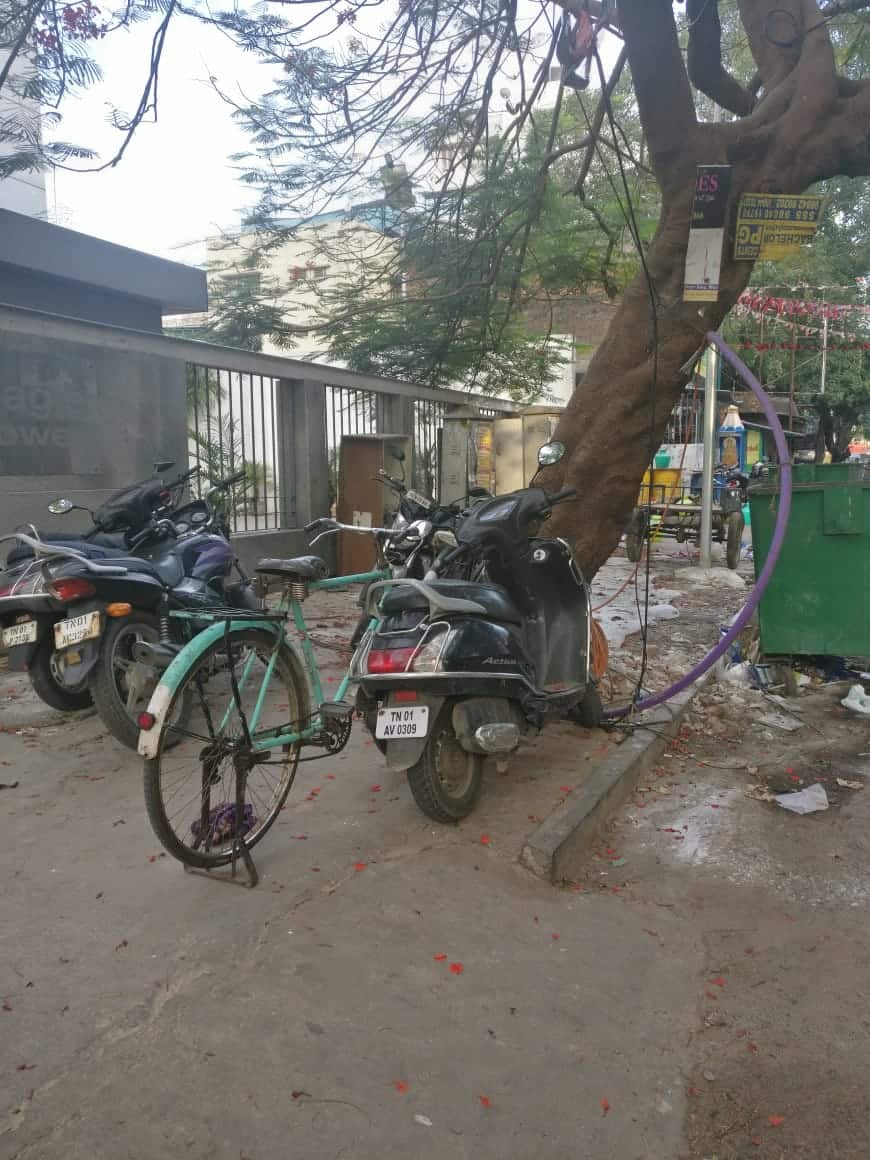 Residents in North Chennai say that the footpaths are constructed only to facilitate hawkers. “Except in one or two localities, there are no footpaths in Ambattur. Even if the corporation constructs footpaths, it is done haphazardly, without clearing encroachments. Hawkers took over the footpath in Thirumangalam Road in Mogaippar, leaving no space for pedestrians,” said S Suresh, General Secretary, Federation of Ambattur Resident Welfare Associations. The prominent Villivakkam – Kunnur high road and the road leading to Ambattur bus terminus has no footpaths.

Seeking anonymity, an engineer from Greater Chennai Corporation said, “Footpath construction is an easy way of showcasing the work done by a civic body department.  Before the completion of the financial year, footpath works are usually on in full swing, in order to be accountable.”

To what end, such accountability? If crores of taxpayer money are being spent by the civic bodies to merely check all boxes and show a good record on paper, isn’t it time that citizens begin to question the workability and effectiveness of such construction in their neighbourhoods?

With plastic packaging being the norm, how can you, as a consumer, do your bit to reduce plastic waste? This database of stores by CAG can help.

Voting in the time of COVID-19: Chennai voters, check out this detailed guide

How can you vote without a voter’s card? Where is your polling booth? Who are essential services workers? Can they vote remotely? All this and more answered here.