In December 2015, a few of us, office colleagues, got together and formed Naam Virumbum Thamizhagam (The Tamilagam we want) with the intent to engage in action that would eventually lead to the improvement of our respective neighbourhoods. 15-members strong today, our primary mission is to take the lead as citizens in bringing about a positive change in governance, by engaging in socio-political dialogue and activities.

For any organization seeking to bring about an improvement in governance and social change, it is very important to know and resolve the local problems that citizens face, before taking any big steps. Our first thought, therefore, was to identify the immediate problems, raise complaints about the same on the online portal of Chennai Corporation, and then follow up with them as required to resolve those issues.

One can call the helpline number 1913 to register complaints. But the online portal here is a really useful tool in this regard. Any citizen can browse this portal and lodge a complaint  with the Corporation of Chennai, by providing their mobile number, name and the complaint details. The web page is simple but captures different types of complaints with various drop-down boxes.

Selecting the Area, Locality and Street from the available boxes might be a challenge to begin with, till we get used to it. Specifying the exact location of the fault is necessary for the officials to locate the issue. When the complaint is lodged, and during any subsequent update by the Corporation officials, we receive an update on our recorded mobile number. Once a complaint has been filed, we can go to the same portal and check the status of the same at any time.

Armed with this knowledge, members of Naam Virumbum Thamizhagam initially started conducting social audits in their respective wards and identified certain pressing local issues that could be raised through online complaints. In all, around 100 such complaints were raised over a period of three months of which around 60 were properly closed upon resolution at field. Of the rest, some were closed with comments while  some remained open for a long time.

The screenshot of an actual corporation complaint which got resolved and its reflection on the portal is given below. The comments by the corporation officials can also be seen here. 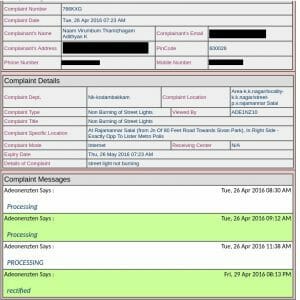 Another example, an instance in which the field issue was not rectified properly, can be seen below: 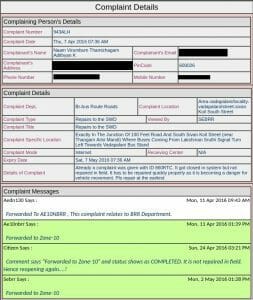 Once the complaints had been raised, we started receiving calls from Corporation officials the very next day. The responses differed from one case to the other, and the purpose of the calls was usually one of the following:

Whatever be the outcome, the very fact that we were receiving these calls from the Corporation officials, which indicated their intent to look at proper resolution of the issues, motivated us. Thus, we started increasing the count of complaints month on month.  Gradually, we were able to identify some clear patterns in the response and redress provided.

In our experience, complaints regarding street light issues — especially those that demanded only bulb replacement — were attended to very quickly. Sometimes, we were surprised by the turnaround time. Even when we raised a complaint at midnight, around 1 am, we would receive calls from the officials by 7 am and many a time, the issue would be resolved by 8 am.

Street light issues other than bulb replacement took up to a week to be resolved on the field.

Similarly, complaints on “Waste available on the roads for clearance” and “Dog menace” would be also be attended to immediately.

For some complaints, if the resolution was likely to take time, the officials would request us to close the complaint on the online portal even as they worked on the actual field issue, as they would otherwise be questioned by their higher officials during the periodic review process on the outstanding complaints.

This indicated that there is a process in place by the top management of the Chennai Corporation to review the progress on resolution of online complaints; however, the actual functioning at the lower level was not as goal-oriented and at times ended up defeating the very purpose of the overall complaint management process.

For complaints other than the items mentioned above (for example, road issues, SWD issues etc), we did not see much interest among the officials to resolve the issues. They would add some comment and the complaints would be resolved in the online portal while there would be nothing much to show for it in the field.

The usual reasons for failure in on-field resolution in such cases would be:

Lessons learnt along the way

A key realisation from this entire process has been that a lot depends on the individual officials in charge. Ward-level officials of the Corporation of Chennai play an important role in handling such local complaints.

The AE (Assistant Engineer) at the ward is the ultimate authority for all activities in that ward or division, both terms being interchangeably used. If he is competent, the people under him perform relatively better. Otherwise, the incidence of field resolutions are much less and complaints are resolved only on the portal.

The lack of supervision by the higher officials (at the zonal level or still higher) is perfectly exploited by the people on the field and complaints are handled in their own style. So, resolution of field issues come to depend on the individual in spite of a process in place.

A people-centric and environment-centric approach will be the key to bringing about quality service by local government officials. The government should increasingly look at using the currently available IT technologies and social networks to encourage the involvement of citizens in raising the bar for levels of service and governance.

About K Adithyan 1 Article
Adithyan is 'Technical Architect' in a software company developing Java-based telecom network management applications. As an individual, he is deeply interested in issues that affect the common man's growth and the development of Tamil Nadu as a whole.

How can commute in Chennai reinvent itself in 2021?

How can travel within the city be made easier and more sustainable? As public transport begins to open up in the post-lockdown era, we mull over a few critical points.

Flouting of norms during milling of roads leads to several issues, including flooding. Residents can play a role in averting such situations.