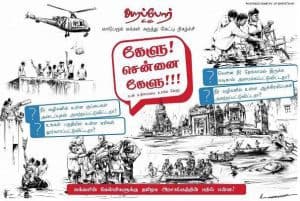 Who can forget the devastation of the Chennai Floods in December 2015? Certainly not the residents of Chennai who suffered for days, nor the volunteers who scrambled to provide relief.

Almost a year has passed, and the monsoon is upon us again. Is the city prepared to face a deluge? Has the Government taken preventive measures? Have we learnt any lessons at all from last year?

To find answers to some of these questions, and to push for constructive action towards making Chennai flood-safe, Arappor Iyakkam launched “Kelu Chennai Kelu”, a one-of-a-kind attempt at participatory democracy, a public hearing on the state of Chennai’s preparedness for the monsoon.

All sections of civil society – Resident Welfare Associations, flood relief volunteers, NGOs, and students of city colleges – were invited to participate and share stories from their communities. Invitations were also extended to officials from the PWD, Corporation of Chennai, Metro Water, and also to all MLAs of the Greater Chennai Area, including the Chief Minister of Tamil Nadu, to attend and listen to the citizen’s questions and suggestions.

But a question remained – would the public come? Or would we demonstrate that notoriously short public memory, and stay busy and apathetic?

Well, the stage was set, and come they did. Rain and Sunday notwithstanding, concerned citizens turned out in impressive numbers. Groups of people, armed with their list of action points, things that the Government needed to do in the next 45 days before the monsoon arrives.

Most heartening though, was that the student community of Chennai turned out in full force. Students from almost all city colleges came in large numbers, and vociferously declared that they are ready to support the Government in any effort, and requested the Government to involve them, and harness their ideas for a better city for all of us.

The representations of the public and the students were patiently heard for over three hours by an eminent panel – Retd IAS Officer and Urban Planning Expert, Shri Devasahayam; Amicus Curiae appointed by the Madras High Court to investigate building violations, Advocate Suresh; Retd PWD Engineer Shri Thirunavukkarasu, and Trustee of Association for Democratic Reforms and Associate Prof IIT-M, Dr. Sudarsan Padmanaban. The panelists are currently summarising the discussions, and will present the findings to all levels of Government for appropriate action. 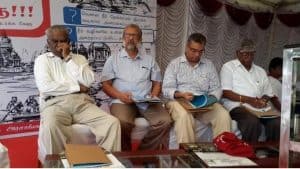 The best part of the event, and one which made it a truly democratic exercise, was the presence of two officials from the Chennai Corporation, and the MLA from Chepauk Constituency, Shri J Anbazhagan. They noted the grievances raised by the public and promised to look into each of their concerns. It was heartening that Shri Thirumurugan, Chennai Corporation, promised the residents that together, they would ensure that Chennai was resilient enough to face the floods.

There were some heart-wrenching moments too: a hundred students from the St.Louis College for the deaf turned out to show their enthusiasm and Smitha Sadasivan from the Disability Rights Foundation spoke of the impact of natural disasters on the disabled.

And so, Chennai saw the rekindling of the true spirit of democracy, a participative, collaborative process, where citizens are proactive, where government officials are responsive, and where elected representatives are approachable.

And as proof of the pudding, work has begun in right earnest. Desilting and removal of encroachments has already begun in the areas identified by Arappor’s social audit (click here for the Arappor Social audit report)

Now we have hope that the tragedy of last year, the loss of life and property has not been in vain. It has left in its wake, the seeds of learning and action – the kind of resilience that makes our city beautiful.

About Deepa Seshadri 2 Articles
Deepa Seshadri is a Chartered Accountant by training, but an activist at heart. She volunteers with Arappor Iyakkam and several other initiatives, and can be reached at deep.seshadri@gmail.com

In photos: A walk through the once-bustling, now deserted Moore market

Moore Market was once a thriving book bazaar, particularly famous for second-hand books and frequented by large numbers of students. But a couple of hours in the market on a Monday morning shows how business has collapsed, thanks to the popularity of online bookstores.

Ready to pay waste collection charges? The Corporation of Chennai has invited comments from citizens on its draft solid waste management bye-laws. Stay informed and make your voice heard.

For activists and officials clearing encroachments in Chitlapakkam Lake, it was heartening to find a good number of people rising above blind religious belief to support the environmental cause.