March 23, 2015; the venue: Chennai Corporation Council. While passing the budget of his last term in office, ‘Saidai’ Duraisamy, then Mayor of Chennai remarked, “Of the 419 announcements made by the AIADMK-led Corporation so far,  218 have been implemented. We will implement the remaining 165 this year.”

This was at the Corporation Council meet on the budget. He also compared the percentage of announcements that were implemented in the earlier regime vs his current regime and was proud that he had  done better by a margin of 15%.

In that budget debate, 103 of the 200 councillors participated. The opposition staged a walkout.  A councillor belonging to the Congress party criticized it on the grounds that no new announcement had been made. The Mayor was at pains to explain that this is because they wanted to complete all pending projects.  Feedback on and reactions to the budget were heard from all quarters – from a former councillor to citizens – on what the Corporation could have done better as well as on what they liked in the budget.

The situation was worse last year compounded by the RK Nagar by-election, which was postponed subsequently. Though the law mandates the budget to be passed by March 15th, last year the document had not been shared till April 10th. We were lucky that the by-election was cancelled and the budget was published immediately, else it would have been further delayed.

Representative or bureaucrat – Whose budget is it anyway?

A budget is technically an annual statement of accounts. The corporation council can come up with a policy anytime. Yet historically, governments at all tiers have used it to provide a sense of direction for the rest of the year. The Union Budget of the Government of India in 1991 in the wake of the economic crisis paved the way for liberalisation and is considered a milestone budget for India.

Through the Budget, the government also takes stock of initiatives in the year gone by and outlines new initiatives  for the year ahead. Ideally a budget should also be a consultative exercise, given that it is supposed to be decided at a formal forum like the Gram Sabha in village panchayats, where any citizen can participate.

At the city level, the equivalent of a gram sabha is supposed to be the ward committee, but in complete violation of the spirit of the 74th amendment of the Constitution, ward committees in reality are only made up of representatives and ordinary citizens rarely have a say. At best, the Mayor holds conversations with NGOs and resident welfare associations informally and tries to factor in their demands.

And now Chennai does not even have elected representatives since October 2016. The passing of the budget has been largely a bureaucratic, and even secretive, exercise over the last two years which has neither involved any kind of consultation nor any meaningful post-budget communication to citizens.

Normally, the budget is an important opportunity for the elected Council to reach out to the public on what it has done In the past year, what it will be focusing on over the next year and the benefits that citizens can look forward to. It’s also not just about related numbers, because for a representative who would go back to the people after five years, seeking re-election, a narrative is essential. The opposition, for similar reasons, has to look out for lacunae in the budget. But for the bureaucrat, it is just a routine exercise.

The city budget broadly has two items: Revenue and Capital. All the inflows and expenditure go under one of these two heads.

The major items under the Revenue Receipts and Revenue Expenses can be visualised through the Pie Charts below. 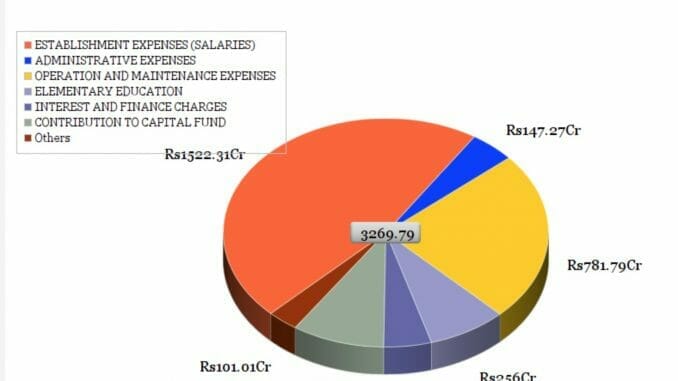 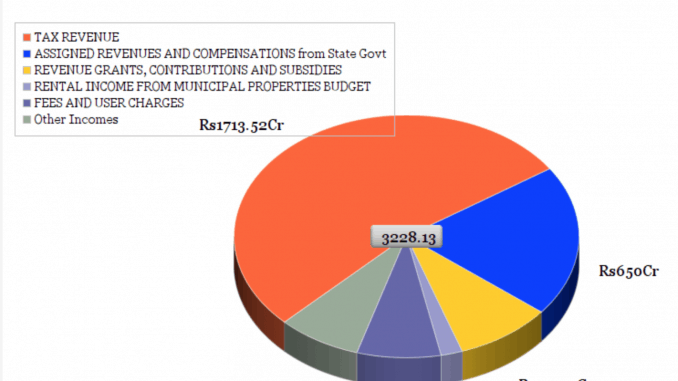 The major sources of Capital Receipts are

The major components of Capital Expenses are

In last year’s budget, revenue receipts fell short by a whopping Rs 451 Cr, a 15.5% shortfall from the estimated revenue of 2917.92 Cr. Yet the corporation has increased its estimated revenue for the current year to 3228 Cr.  The revenue expenditure was short by 205 Cr last year, from the estimate of 3158.22 Cr. The same holds true for capital revenue and expenditure as well as loans. The revised numbers are all lower than what estimates projected.

Yet, the corporation this year has increased all the numbers beyond the last year’s unmet estimated revenue. How will these numbers be met?

The Thoraipakkam Underground Sewage project was initially supposed to be completed by March 2017. The deadline was later extended to September 2017. The project is still not completed.  So are a host of other projects. What is the status of these projects and when will these be completed?

The Budget is only just one of the events where the councillors meet as people’s representatives. The Corporation Council is mandated to meet at least once every month. In fact the representatives are not just part of councils, they are also part of Ward Committees, Standing Committees, Appointment Committees. Where is the opportunity for Chennaiites to give inputs to these committees?

In the last two years, the budget has not proposed any new initiatives and the official line has been the focus on completing pending projects. However, a recent ranking of city municipalities by Bengaluru-based Janaagraha has put Chennai in the bottom five among the 23 cities surveyed. Would just completing the pending projects make our city better?

The property tax was last raised in 1998, the city had a deficit budget last year and it’s the same for this year as well. Property tax is the top most revenue contributor for the Corporation. Why can’t this be reasonably increased to bring it at par with other metropolitan cities? The Corporation says, still they need to take a call on increasing property tax.

Unsatisfactory or inadequate answers may be a part of interaction and communication in any democracy, but the lack of forums in our city to even air these questions is a greater cause for concern..

Clearly the Constitution is being violated by denying people their third tier of government – the closest governance available to them. Also the fate of various committees supposed to represent their citizens is in limbo. The state government which wants more power for itself, doesn’t even want elections for the third tier, leave alone fiscal and functional devolution!

It is ironic that the oldest corporation of Asia doesn’t have a Mayor. But even more ironic perhaps is that  Uttaramerur, which had a highly refined village democracy 1100 years ago, is deprived of an elected representative in present-day, democratic India in the 21st century.

About Mahesh Kumar S T 12 Articles
Mahesh Kumar S T is a prolific writer on citizen issues, particularly with respect to the election process and voter education. He can be reached at stmaheshkumar@gmail.com

Is Chennai ready for a ban on plastic?

Watch this video to hear the varied reactions among different sections of Chennai society to the proposed ban on single use plastic from January 2019.

The Pallikaranai marshland has shrunk in size due to encroachments and dumping of waste. Read the Tamil translation of our article that looked at whether a Ramsar tag could help save Pallikaranai.

What’s in a venue? Everything, find hapless customers as unscrupulous kalyana mandapams insist on cash payment and no refunds in case of cancellation. It may be a good time to come full circle – weddings celebrated at home or a temple!