Walking along the beach for nearly 8 km and looking for nests of turtles, dead in the middle of the night, can be both fascinating and tiring. Watching an olive ridley turtle coming to shore to nest, a process that is older than dinosaurs, can be exhilarating. If not, the waves, the sand and the conversations around the environment we live in amongst people from different backgrounds can be rewarding.

The fluorescent glow of the increasingly rare Noctilucas, a bioluminescent organism, adds to the beauty of the ‘turtle walk’. However, turtle conservation is not as easy as it sounds. It also means facing feral dogs, occasionally stepping on human faeces, bumping into drunk and unruly men or a grumpy policeman on night patrol.

Every day, between January and March, volunteers from the Students Sea Turtle Conservation Network (SSTCN), in Chennai, Tamil Nadu cover two stretches along the beach, adding to a total distance of nearly 13 km. They have trained their eyes in the dark to look for tracks left by mother turtles on loose sand. These tracks usually lead to a nest. Once a nest is found, it is relocated to a hatchery.

A few swear never to come for these ‘turtle walks’ again. For others, it is a step into the world of conservation.

These walks have been a launching pad for a career in conservation for several students. Completely run by volunteers and founded in 1988, SSTCN begins its 30th year in operation this year. “It’s the longest-running student programme in the world for sea turtle conservation, maybe one of the longest running student conservation programmes of any sort,” said Kartik Shanker, one of the founders of SSTCN. He is currently the director of Ashoka Trust for Research in Ecology and the Environment(ATREE), a research institution working towards biodiversity conservation.

Joseph Raja, wildlife filmmaker and photographer went for his first walk when he was 15, just the night before his public exams were to begin. “I still don’t remember why I did that,” he said, adding that it changed the course of his education and career. After studying commerce in school, he decided to take a year off instead of going to college. He used this time to intern with photographers and wildlife filmmakers and understand how he could enter into the world of conservation.

“The beach was in my backyard, yet I didn’t know so much wildlife existed – from jackals to different types of birds,” he said. He made it a hobby to identify birds by their calls. “These walks weren’t just about conserving turtles. As a 20-year-old, it made me question my lifestyle choices and how it impacts the world we live in. I began to wear handwoven clothes and shunned processed food,” said Raja. In 2015, his movie “Walking With Wolves” went on to win the wildlife conservation film award of the year at the Centre for Media Studies’ Vatavaran festival. He spent three years tracking wolves in south-central parts of India to understand the relationship between them and local tribals and nomads.

Once a nest is located, volunteers measure its dimensions to dig a replica in the hatchery. The dimensions of a nest determine the temperature of the eggs, which in turn, determines the sex of the hatchlings. Eggs closer to the surface are generally warmer and tend to be females. Once hatched, usually between 45 and 60 days, the hatchlings are released into the sea.

From olive ridleys, one of the smallest species of marine turtles, Adhith Swaminathan went on to work with leatherback turtles – the largest species. “Being on the beach and working with turtles quickly became a way of life. I am fortunate enough to make a living off it. I can’t ask for a better office!” said the 31-year-old. He now spends at least ten months a year in the Andamans and Nicobar islands, heading a team from the Andaman and Nicobar Environment Team (ANET) to study how nesting patterns of leatherback were impacted by the tsunami in 2004.

Swaminathan went for his first walk when he was 10. “For the first four years, I did not see a single nesting turtle. It remained an elusive animal that I could only see on Discovery Channel or National Geographic. I kept walking, determined to see an olive ridley in flesh. The first time I saw them, it was surreal – even absurd!” he said. 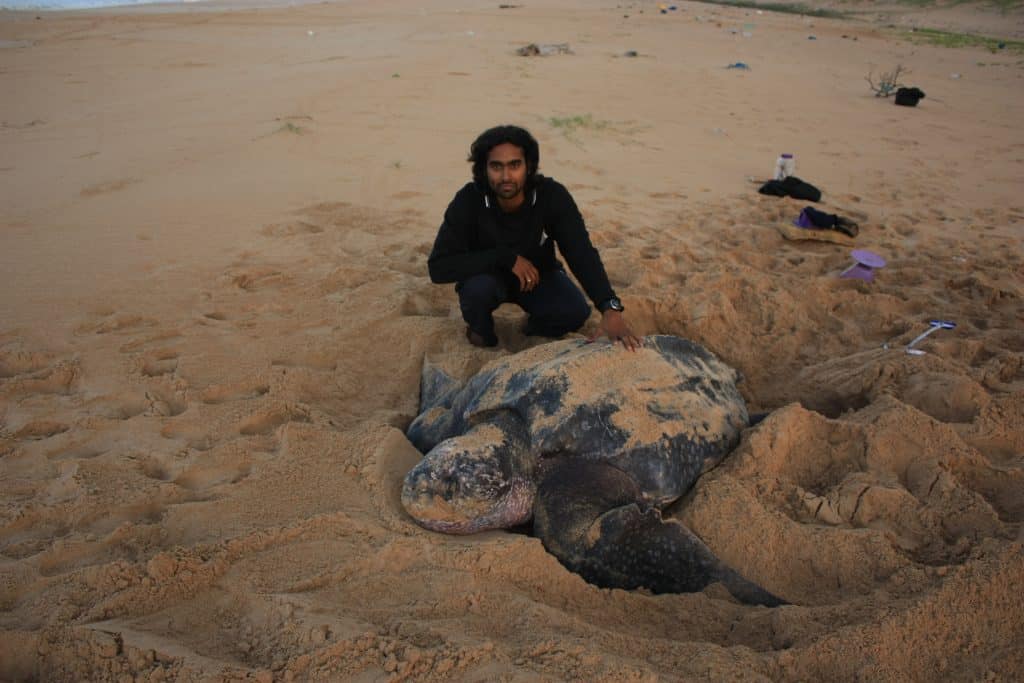 Not just about turtles

On Friday and Saturday nights, there is a briefing before the walk – where the public is encouraged to ask questions on not just turtle conservation, but on anything related to the environment. “Turtles are a charismatic species, instantly kindling curiosity in people. It is a good starting place to understand about conservation,” he said. When he comes to Chennai, Swaminathan anchors the briefing session. “It makes me happy to know that someone else is going through the same journey that I went through when I began walking,” he added.

Olive ridleys make their annual visit to Chennai between January and March. The nests continue to hatch till May. They lay their eggs and simply turn around to the sea – leaving the nest vulnerable to poachers and dogs. After hatching, baby turtles instinctively walk towards the brighter horizon – which under natural circumstances is the sea with reflections of the moon and stars. However, beaches in an urban setting are lined with streetlights and houses – causing newly hatched turtles to walk towards the opposite side. They either die of dehydration or are picked up crows as an easy snack.

Being on the beach late at night is generally considered unsafe for women, especially in India. But for Divya Karnad, marine researcher, it gave her confidence and she learned a great deal about the fishing community. “Fortunately, my parents were supportive of it,” she said.

Karnad began turtle walks when she was in college, studying zoology. After Chennai, she went to study olive ridleys in Orissa. Her research was on the impact of light (wavelength and intensity) on turtles. While on one of her usual nights on the beach, she found herself alone in the dark when a bunch of local fishermen surrounded her, upset and angry that she chose to employ fishermen from a neighbouring village instead of them.

“Having had a lot of experience with fishermen in Chennai, I was able to diffuse the situation. I also understood where they were coming from,” she said, explaining that fishermen in Orissa see turtles as a hindrance to their livelihoods. “During mass nesting, they can’t catch anything. And this is soon followed by a two-month ban on fishing,” she added.

Passing on the baton

SSTCN was then set up by a group of students to ensure that turtle conservation would continue on the Chennai coast. “For the first ten years or so, there were no older members who provided guidance or assistance. After the first few years when we had to ensure that it would keep going, it gathered a momentum of its own. The students who were running the programme would just pass on the responsibility to one or more enthusiastic juniors when they left,” said Shanker.

V Arun, a teacher, took over the mantle in 1988. He was earlier teaching in Chennai but shifted to Thiruvannamalai in 2009. He now travels to Chennai every weekend during the nesting season to hold the briefing before the walk begins. Almost every person this author spoke to were quick to point that he was responsible for their career choices. “We might be making a difference to turtles coming to the Chennai coast, but not sure how much of an impact our work has on turtle conservation as a whole,” he said. “However, the turtle walks have touched several lives. And it is heartwarming to see so many youngsters follow their heart. I feel this is as much as a success as the walk themselves,” he added.

He goes on to quote examples of people working with alternate energy, joined environmental organisations like Greenpeace and even train themselves for snake and dog rescue. “The trend is only getting better; with the current set of volunteers thinking less about conventional careers. With better awareness and exposure, they are perhaps more emboldened to make the shift,” said Arun.

[The article and all photos were first published in Mongabay India, an environmental science and conservation news service, and has been republished with changes in the headline alone. The original article can be read here.]

About Karthikeyan Hemalatha 1 Article
Karthikeyan is a freelance journalist based in Bangalore. He covers issues relating to the environment, climate change, agriculture and marine ecology. He was selected as a fellow with the Dag Hammarskjöld Fund for Journalists in 2015 to cover the UN General Assembly and international politics.

You may have to do without telephone and Internet connections for the sake of a festival, or bear the noise of crackers for hours after your bedtime, and there’s not much you can do!

The new government has unveiled plans for Singara Chennai 2.0 to make the city more liveable and attractive. A citizen journalist outlines his expectations.

Three adults in a family came down with COVID-19, and neighbours came together to help these patients in isolation. A survivor writes about the difference it made to them.