Chennai is among the top-10 cities in the country in terms of COVID-19 positive cases. The spread of the pandemic has affected all but two zones in the city.

The highest number of positive cases have come from Royapuram with 92 cases, followed by Thiru-Vi-Ka Nagar at 39 and Teynampet at 38 cases respectively.

The civic body has moved to cordon off areas where individuals who tested positive reside and those around these, in order to arrest the spread of the illness. For this purpose, containment zones have been created.

What are containment zones?

How many such zones are there in Chennai?

With 358 cases across Chennai as on April 21, there are now 112 containment zones across the city. While parts of Kotturpuram and T Nagar have been marked as containment zones in recent days, data on the streets under containment has not been officially updated. The latest information shared by the Corporation has 169 streets listed under all zones.

This data will be updated as more information is released. 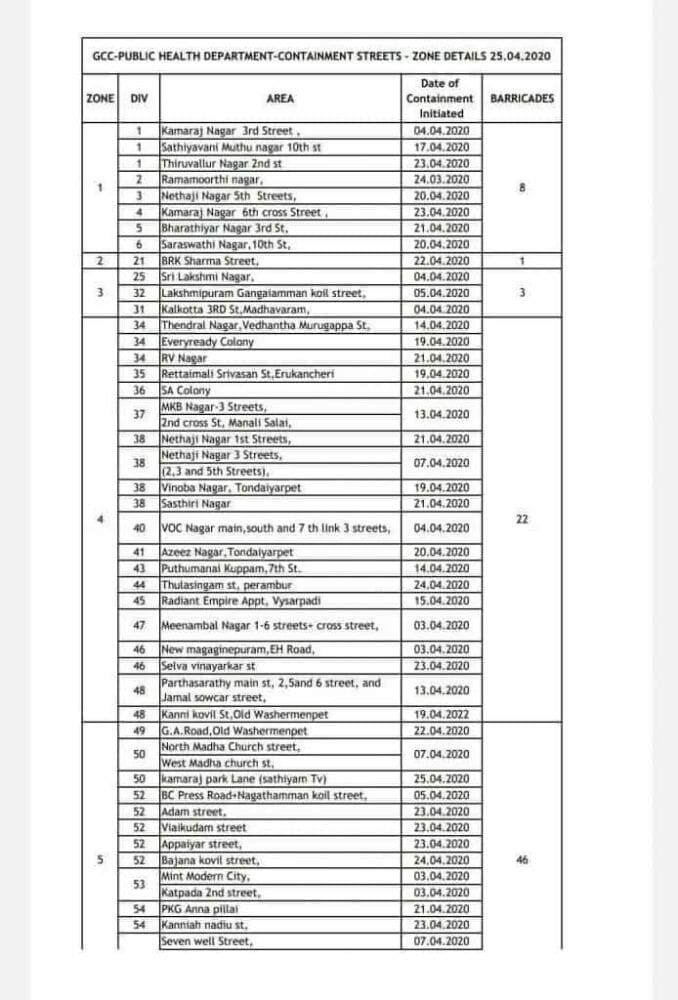 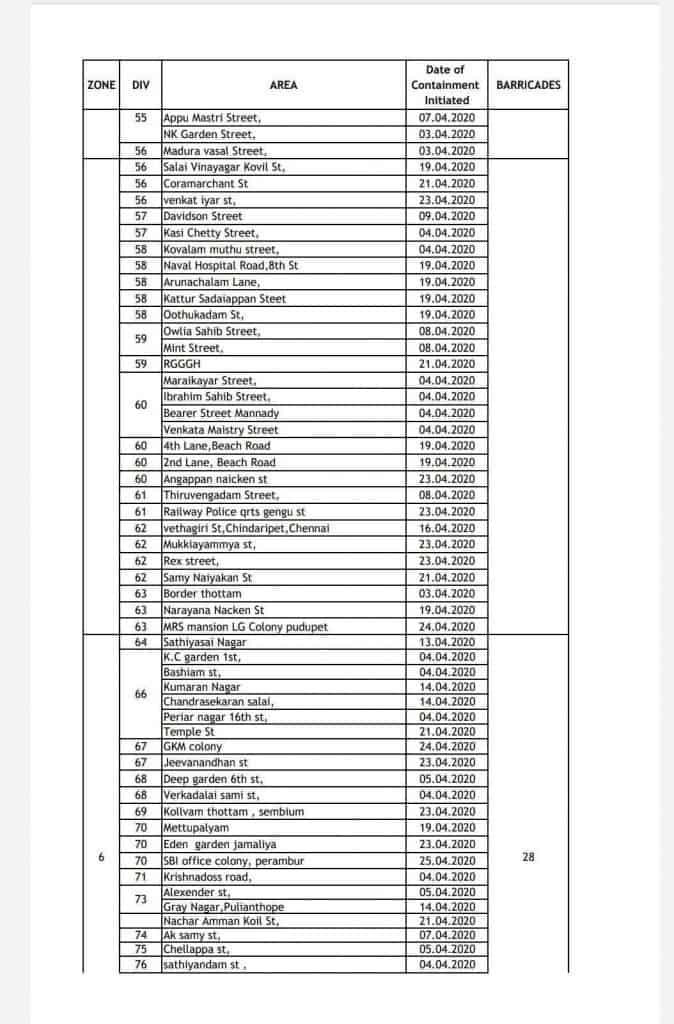 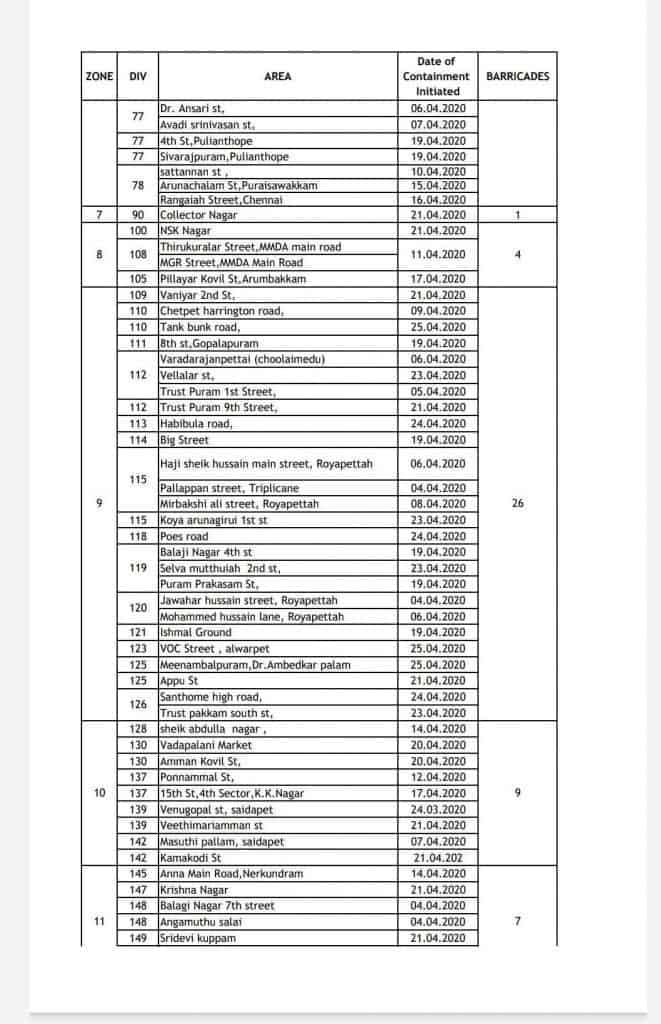 Roughly how many people in Chennai are in such zones?

According to data from the Chennai Corporation, as on April 16th, there were a total of 10,56,738 houses and 20,19,211 households under the containment zones across the city. Daily monitoring by health officials for any COVID-19 symptoms and tracking of elderly, pregnant women and those with underlying conditions such as heart disease or diabetes is being carried out on a daily basis in almost all houses under the containment zone. Close to 12,000 officials have been appointed to carry out the monitoring.

What are the restrictions in containment zones?

In a containment zone, the streets are completely barricaded and entry and exit is restricted. Residents are not to leave the street. Essentials are delivered at their doorstep by the staff engaged by the Corporation of Chennai. Any delivery orders placed by those in containment hotspots will be delivered at the barricades and collected by the residents. Hand-washing stations are established near the barricades for hygiene.

How do you know if your street falls within a containment zone?

In order to know if there are containment restrictions in your area or anywhere nearby, you may check the containment map in the website set up by the GCC or download the corona monitoring app.

How is life in the containment zone?

Rahul* a resident of Gangaiamman Koil street in Zone 3 says the containment measures have brought some reassurance to him and his kin. “We found out that someone in the nearby street tested positive and that they had some travel history. I was quite worried as I have elderly parents. When the barricades were set-up, people began to take the restrictions more seriously. We have all essentials delivered and there are officials who monitor the health and well-being. It is a bit hard to be confined to one street for so long but we all understand that this situation calls for such measures.”

Elderly residents are being given special attention in the containment areas. Kaliyaperumal K of K C Garden in Zone 5 is glad with the arrangement. “ When we were informed that the street will be closed, my wife and I were a bit apprehensive. We are both in our 70s and our children are abroad. But we have been doing fine under the lockdown. Corporation staff have been providing us provisions and even got us the medicines we needed. We hope that the restrictions will be lifted and the city can go back to normal as soon as possible.”

When will restrictions be lifted in containment zones?

While there is no official confirmation on any relaxation of restrictions across the state, the stringent guidelines on daily movement in the containment zones could last longer than in the rest of the zones as a preventive measure. The frequent monitoring for symptoms helps the officials determine the risk of spread. Containment restrictions may be lifted if there are no COVID-19 positive cases from within the zone for a period of 28 days.

About Aruna Natarajan 180 Articles
Aruna is an Associate Editor at Citizen Matters. She has a BA in Economics and a PG Diploma in Journalism. She has also worked in a think-tank on waste management policy and with a non-profit in sport for development. She writes on civic issues, governance, waste, commute and urban policy. She tweets at @aruna_n29.
Twitter

COVID numbers are down today, but can we beat it for good?

As Chennai starts to see a decline in COVID numbers, we must all do all we can to implement safety protocols and accelerate vaccination.

Designed with children with specific learning needs in mind, the Chetana ARM Online library is helping all kids continue reading and other activities, even in the time of COVID.