Before I explain the title, let’s look at the numbers.

These are some simplistic numbers given above to explain the impact of the virus. Let’s understand the stages of transmission of the virus:

Stage 1 is when people come with the virus into India.

Stage 2 is local transmission when the affected people transmit the virus to their friends and/or relatives.

Stage 3 is community transmission where the illness spreads in such a way that the source of the transmission is not know.

Stage 4 is when it becomes an epidemic with no end point like what is has happened in Italy, the new epicenter for the virus.

One must also look at what happened in South Korea when a 35 year old Chinese woman flew from Wuhan to Incheon. She was isolated upon entry. Four weeks after this incident, South Korea managed to avoid a major outbreak with only 30 people contracting the virus, despite many interactions between those later confirmed as being sick and hundreds more people being identified as contacts of the sick patients. This changed with the emergence of “Patient 31.”

It is not clear where the Patient 31 got infected with the virus but in the days before her diagnosis, she traveled to crowded spots like a church, hotel, public clinic etc. Out of the 9,300 people who attended church sessions with her, 1200 reported flu like symptoms. South Korea now has 8,162 cases.

The first case of Coronavirus emerged on January 30th, 2020. As of March 16th there are 110 cases in India. Most of these cases are between Stage 1 and 2. Which means the transmission is known and can be contained. In total, 12,76,046 passengers have been screened at the airports. India will have to do a lot better to make sure the virus doesn’t enter stage 3 and this is when the scare begins.

Let’s go back to Italy which is now the epicenter of the virus (taken over from China) and if we understand what Italy is facing now, we will also understand that we are unaware of what is going to hit us. India is currently behaving as if we believe nothing is going to happen to us. But it is happening. India has 110 cases of the virus which means the virus is here. It has arrived.

We believe everyone is overreacting, nothing is going to happen to us. We believe we simply have to carry masks and sanitizers and we’ll be safe. My city has so far reported only one case, which is also contained. How is that going to affect me? If we see the numbers, from Jan 30 to March 15th, the growth in the number of affected people is ~100%. The incubation period of the virus was believed to be between 7-14 days. But China has seen a case where a person is showing symptoms after 27 days. This shows the virus is unpredictable. A longer incubation period affects the entire relief operations and complicate the spread of the epidemic.

Italy which has one of the best healthcare systems in the world is struggling to manage the patients. Situation is so bad that they are treating only patients who they believe have chances of survival. Many of them are simply left with oxygen mask and abandoned due to shortage of resources. It is impacting other patients as well as the priority is Corona at the moment. Doctors have to let people die and get onto the next patient. The system is collapsing in Italy and the same can happen here, if we do not show discipline and awareness.

It’s not just about wearing masks and using sanitizers

Let’s come to the point. Masks and sanitizers are not going to protect you. Most of them are psychological precautions but the real problem is somewhere else. To avoid progression to stage 3, the only thing which can help is ‘social-distancing’. By now many of you would have heard of this term but may be unsure of what this means.

It simply means AVOID going out in public, crowded spaces until and unless it’s an emergency or a situation that cannot be handled by staying at home. Covid-19 will spread but the speed of spread can be slowed and what that means is that when fewer in the population avoid coming in contact with the virus, the resources can be utilised to treat who are already affected by it, thus reducing the strain on the system.

Corona virus is known to be fatal for the elderly population. In a country where we show immense respect for the elderly, this is the least we can do for them now.

How serious is the situation in Chennai?

A belief of nothing can happen to us seems to be strong in the city and a quick walk around a neighborhood resonates this belief. Though the awareness of the virus is plenty, little concern is shown towards containment of it. It’s business as usual for Chennai. OMR is a cluster of IT service professionals and if we were to go with the understanding that many of them do travel abroad for work, it does have a high chance of becoming the epicenter of an outbreak in Chennai. An IT professional quoted, “on a need basis we work from home, but with many projects it is not possible to work that way. We have to come to office.” 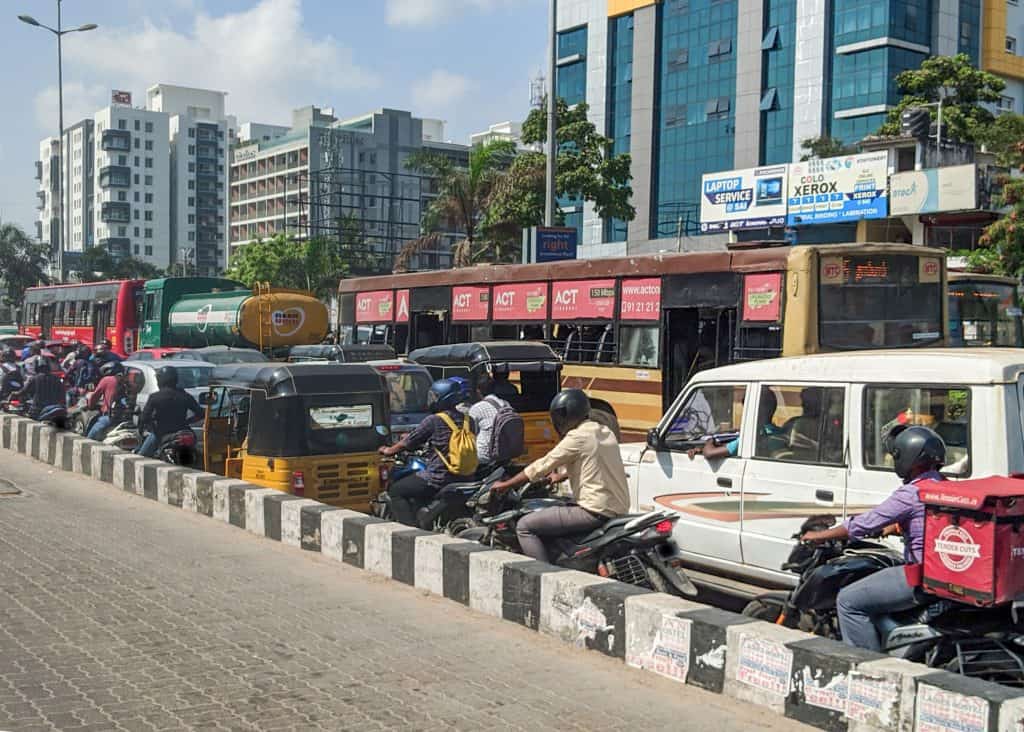 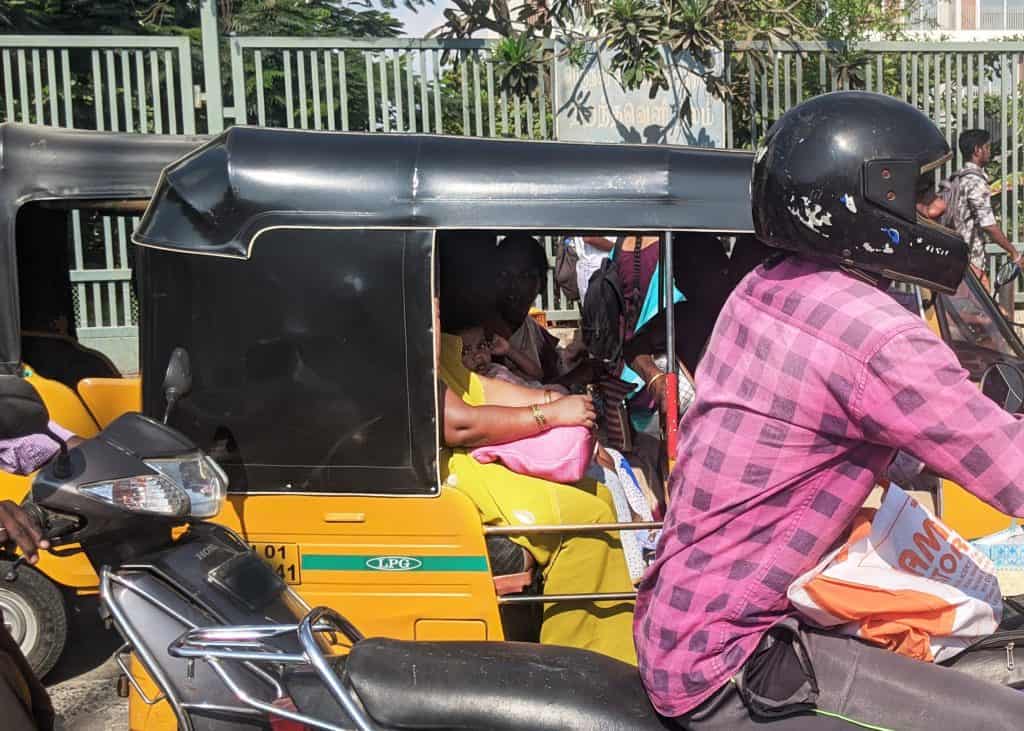 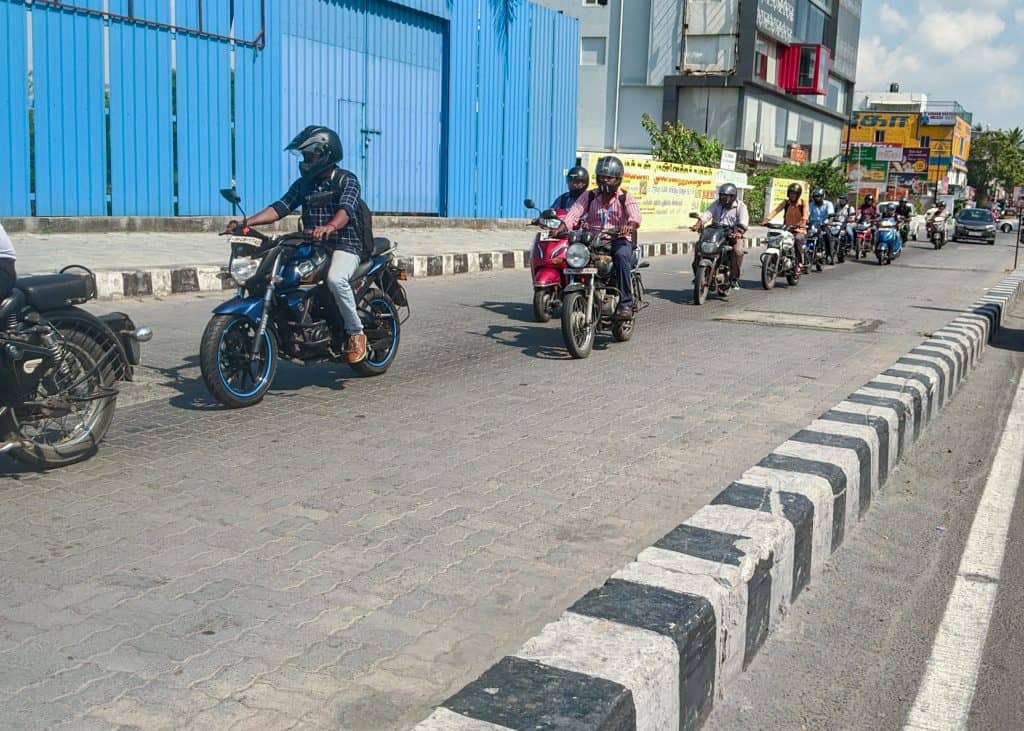 2 wheelers rush to get to work. Pic: Mahesh V 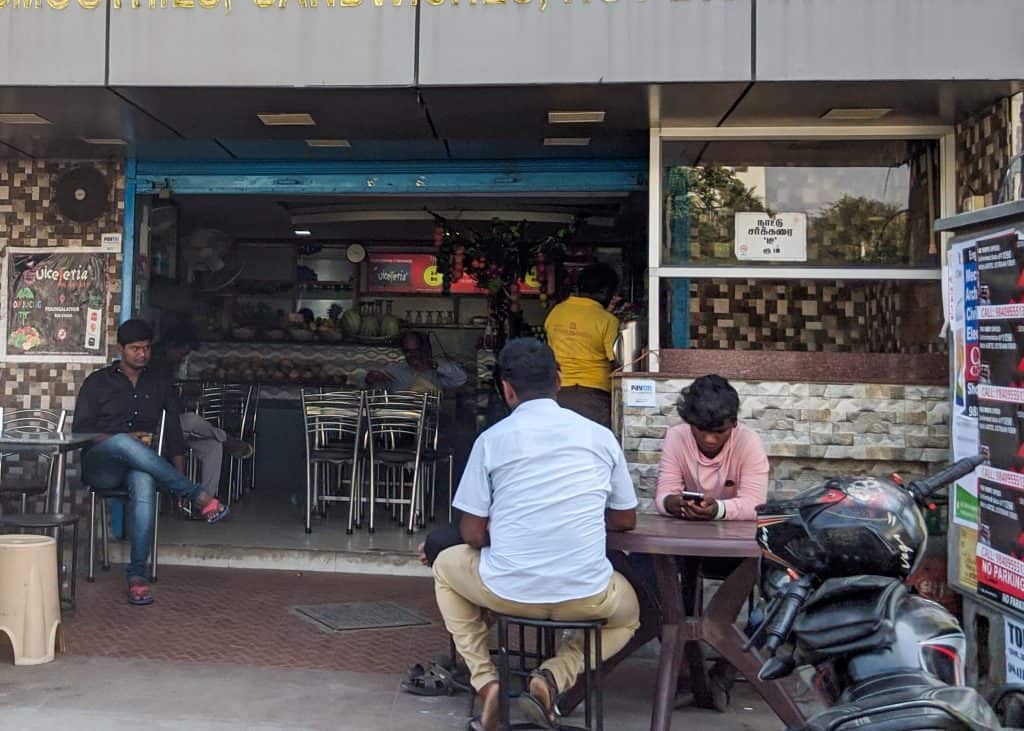 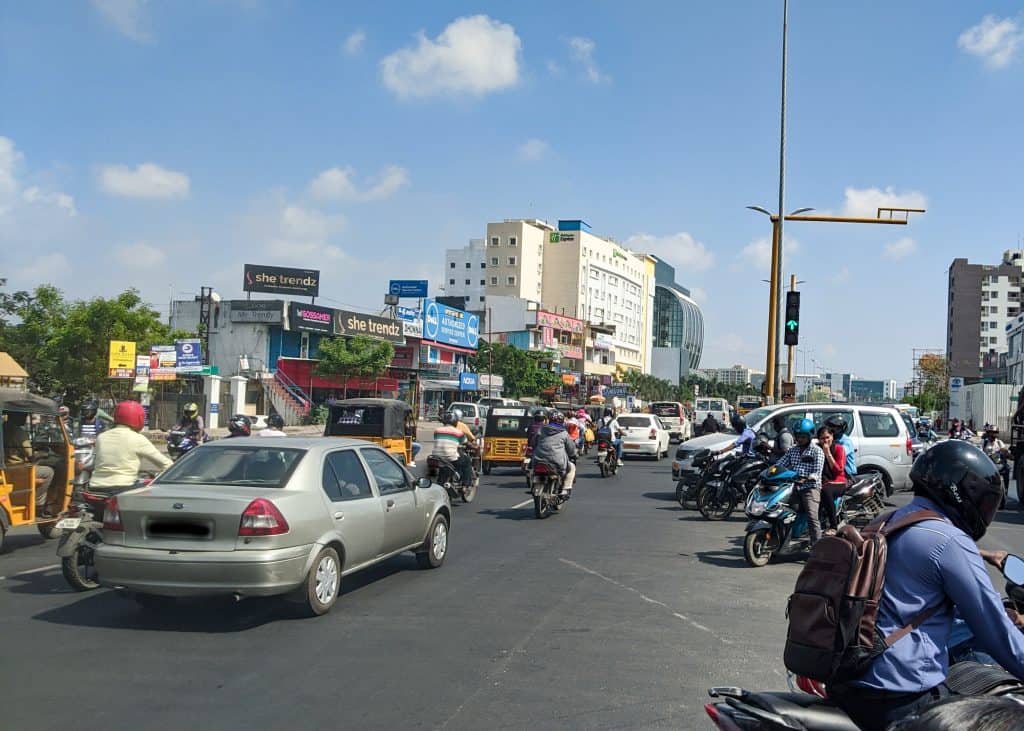 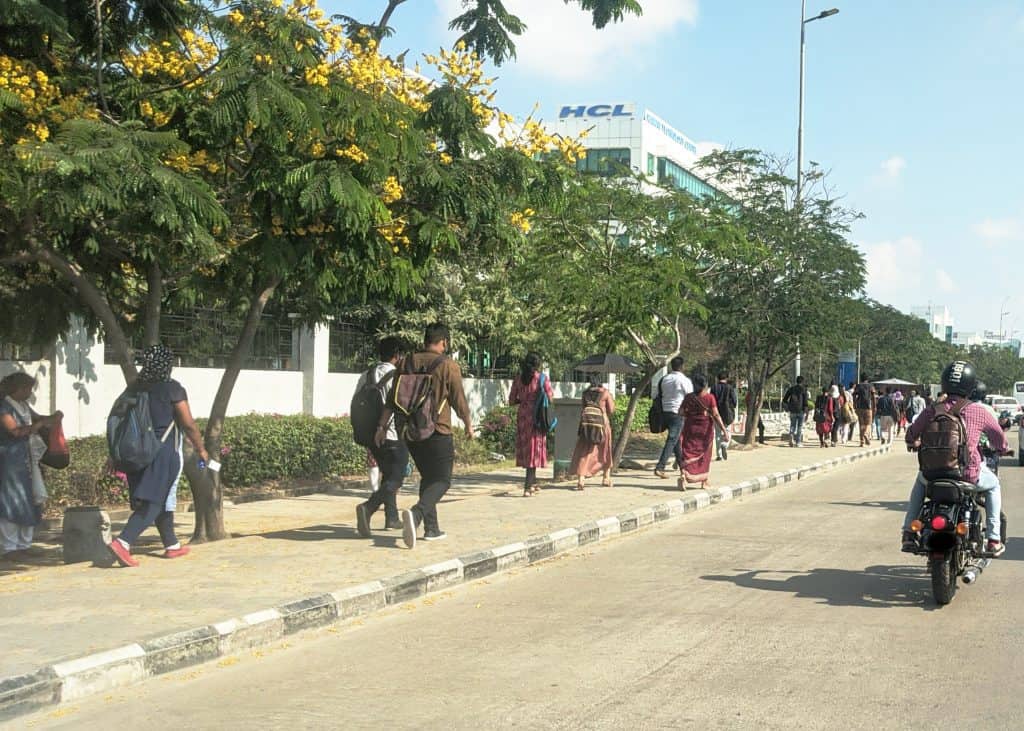 Not possible for everyone to work from home. But hope whoever can do it, does it. Pic: Mahesh V 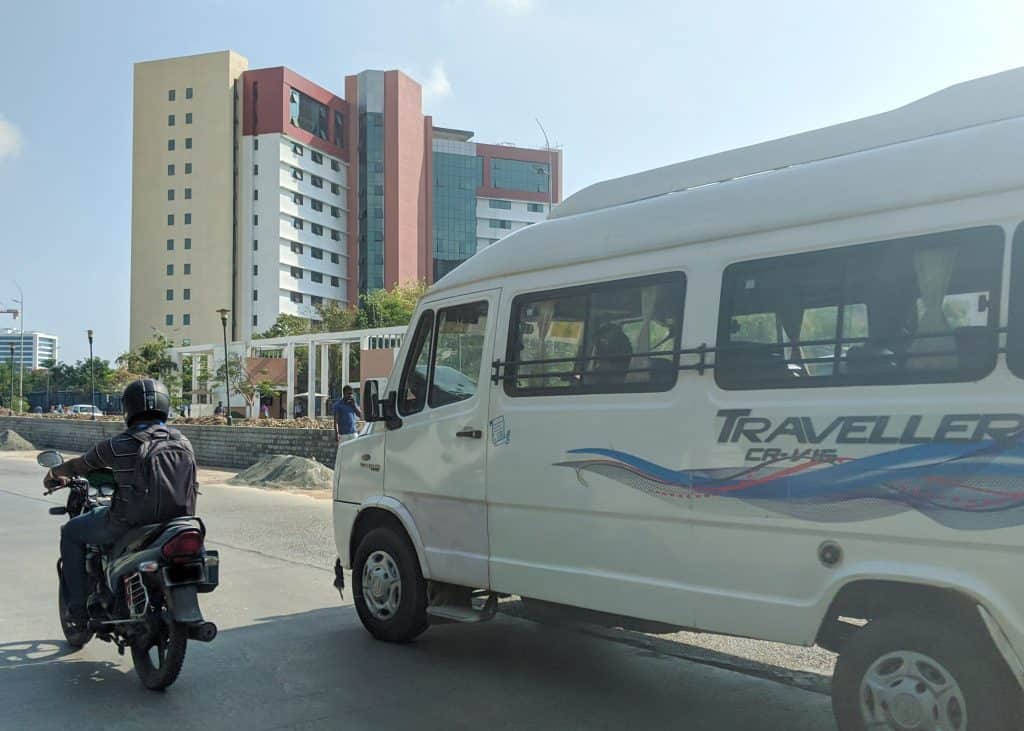 Office Vans and Cabs have not experienced any slowdown. The pick ups and drops seem to be the same for them. Pic: Mahesh V 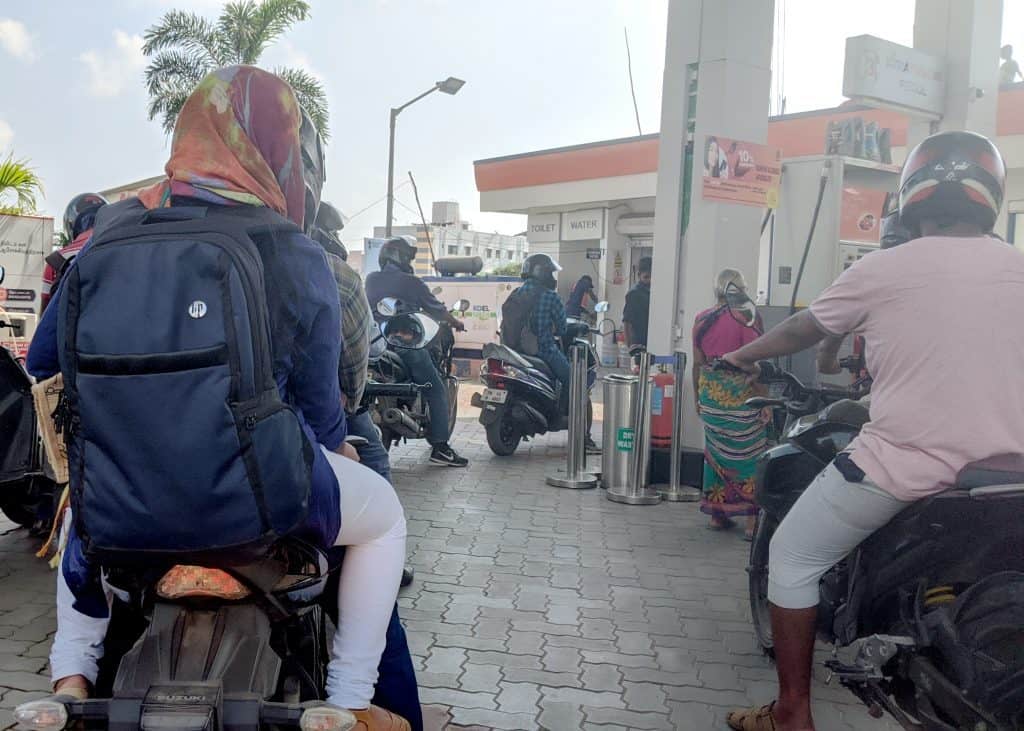 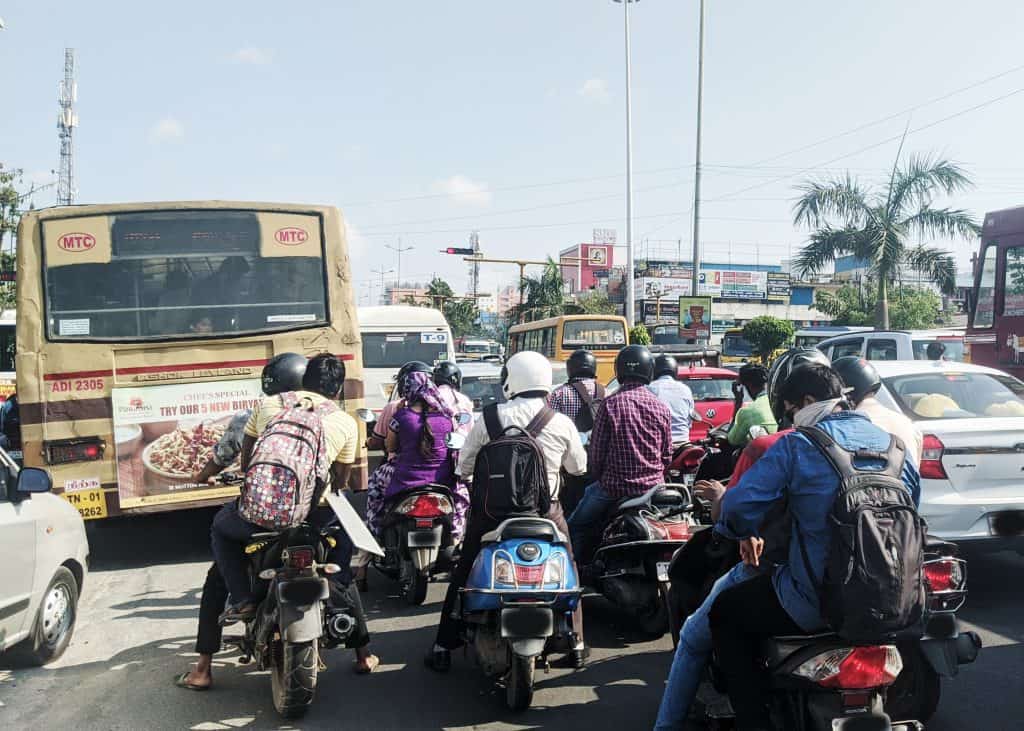 It is understandable many do not have that luxury, but it is not just IT professionals who we seen on the road. We see people from different walks of life and each one of them has to evaluate for themselves where can they restrict themselves and where they cant.

If we can’t distance ourselves socially, then we are not too far away from dialing the number mentioned in the title of the article.

Get the Citizen Matters newsletter
About Mahesh V 22 Articles
Mahesh V is an upcoming photo artist who loves to experiment street and documentary style photography. He can be reached at maheshvs007@gmail.com
Advertisement

A roadmap for MTC: Share plan with bus commuters in Chennai

Here is how my family fought the coronavirus

COVID deaths in Chennai: What’s the mortality rate in your zone?

Private disinfection services step in to fill Chennai Corporation’s gaps; how can you avail the service?

When a child with special needs got lost in Chennai

Why we should not oppose Sunday lockdowns in Chennai

In photos: What are Chennai’s canine protectors doing during the lockdown?

Knock, knock! Are you ok?

2013-2020 and looking ahead: How Chennai is trying to reclaim its streets for the people

100 days of duty; no break, no quarantine: How Chennai cops are falling to COVID-19